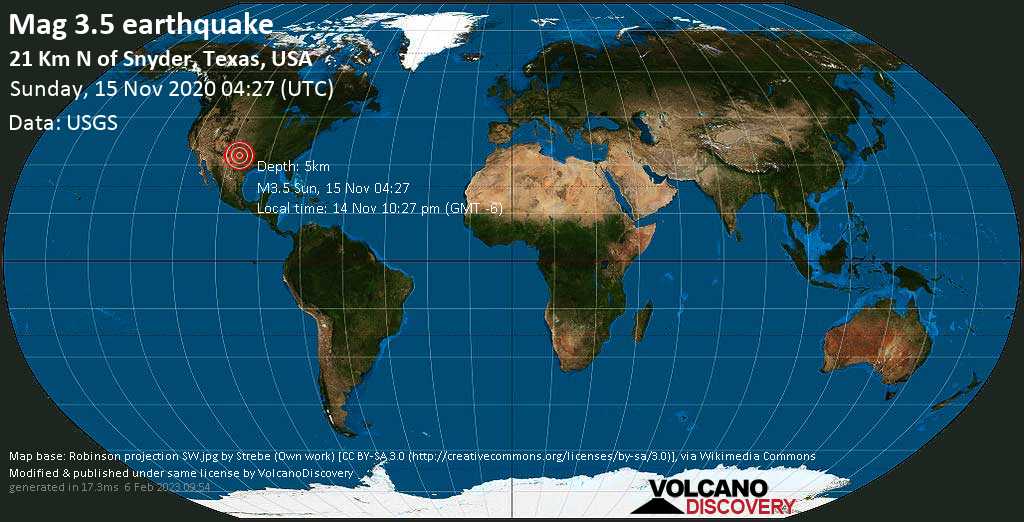 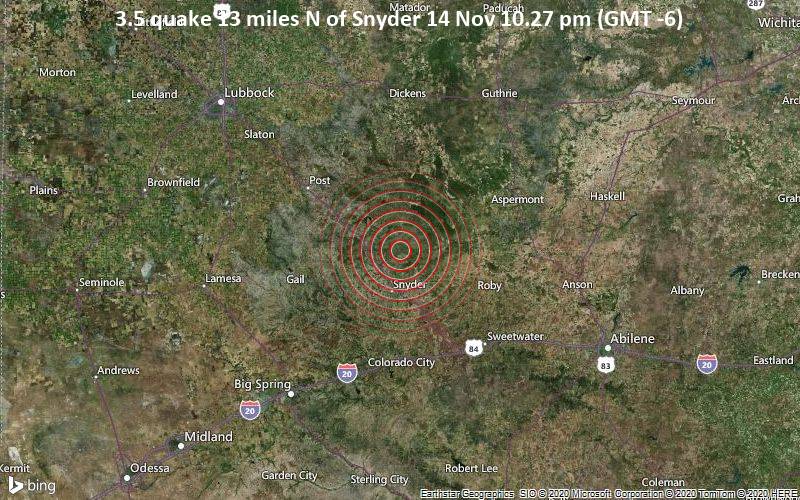 3.5 quake 13 miles N of Snyder 14 Nov 10.27 pm (GMT -6)
A very shallow magnitude 3.5 earthquake was reported late at night near the town of Snyder, Texas.
According to the United States Geological Survey (USGS), the quake hit on Saturday 14 November 2020 at 10.27 pm local time at a very shallow depth of 3.1 miles. Shallow earthquakes are felt more strongly than deeper ones as they are closer to the surface. The exact magnitude, epicenter, and depth of the quake might be revised within the next few hours or minutes as seismologists review data and refine their calculations, or as other agencies issue their report.
A second report was later issued by the European-Mediterranean Seismological Centre (EMSC), which listed it as a magnitude 3.5 earthquake as well.
Based on the preliminary seismic data, the quake should not have caused any significant damage, but was probably felt by many people as light vibration in the area of the epicenter. Weak shaking might have been felt in Snyder (pop. 11,800) located 13 miles from the epicenter.
Towns or cities near the epicenter where the quake might have been felt as very weak shaking include Hermleigh (pop. 300) located 20 miles from the epicenter, Rotan (pop. 1,400) 24 miles away, Jayton (pop. 500) 29 miles away, Roby (pop. 600) 31 miles away, Gail (pop. 200) 34 miles away, Post (pop. 5,300) 35 miles away, and Hamlin (pop. 2,000) 44 miles away.
Download the Volcanoes & Earthquakes app to get one of the fastest seismic alerts online:
Android | IOS

Most recent quakes Top 20 quakes past 24 hrs Quakes in the US
Try our free app!

Exploring the unknown: We sometimes invite you to "test" new itineraries or destinations with us. Such trips are a reduced cost and require a higher degree of flexibility, but often offer a great deal of adventure.
Kuril Islands 17-30 July 2020

Kuril Islands expedition: The Kuril islands form one of the most active volcanic chains in the world, but are very difficult to access. From time to time, we organize expeditions to some of these remote and still unspoiled islands. Adventure guaranteed!
Plate Tectonics

Introduction to Plate Tectonics: The Earth's upper, rigid layer is broken into several plates which are in constant motion to one another. Most earthquakes and volcanoes occur as result of these plate boundaries.
Sakurajima