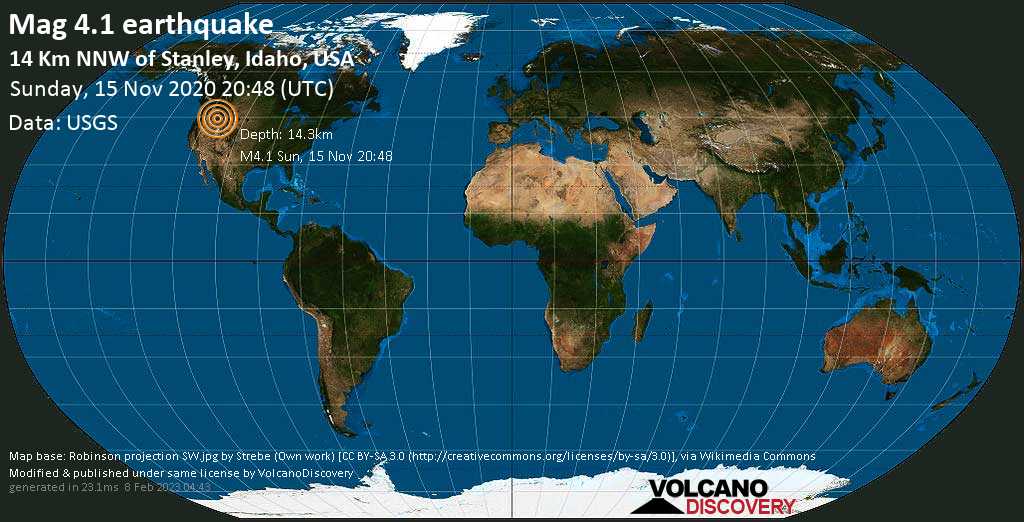 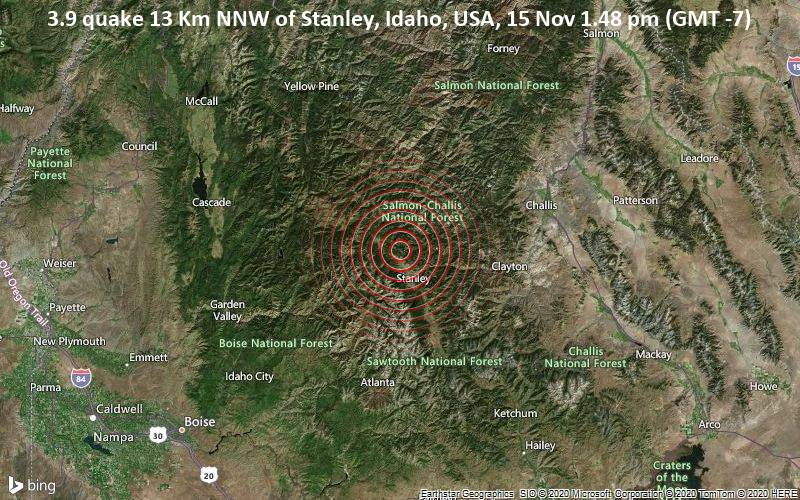 3.9 quake 13 Km NNW of Stanley, Idaho, USA, 15 Nov 1.48 pm (GMT -7)
Just 12 minutes ago, a 3.9-magnitude earthquake struck near the town of Challis, Idaho. The tremor was recorded around noon on Sunday 15 November 2020 at 1.48 pm local time, at a shallow depth of 9.1 miles below the surface.
The event was filed by the United States Geological Survey (USGS), the first seismological agency to report it.
Our monitoring service at VolcanoDiscovery identified a second report from the European-Mediterranean Seismological Centre (EMSC) which listed the quake at magnitude 3.9 as well.
Despite its relatively small magnitude, the quake could probably be felt very close to the epicenter. Towns or cities near the epicenter where the quake might have been felt as very weak shaking include Challis (pop. 1000) located 40 miles from the epicenter.
If you were or still are in this area during the quake help others with your feedback and file a quick report here.
Download the Volcanoes & Earthquakes app to get one of the fastest seismic alerts online:
Android | IOS


Most recent quakes Top 20 quakes past 24 hrs Quakes in the US Idaho
Get quake alerts via our apps!
Android App iOS App

Most recent quakes Top 20 quakes past 24 hrs Quakes in the US Idaho
Get quake alerts via our apps!
Android App iOS App
to top
First visit to our site? If you havn't done it yet, download the Volcanoes & Earthquakes app to get one of the fastest seismic alerts online:
Android | IOS

Photos from Kamchatka: Kamchatka in Russia's far east is one of world's remotest regions and has an almost unparalleled density of active volcanoes. Look at photos taken during our expeditions from this wonderful corner of the world!
Reviews

What clients have said: Browse through feedback about our tours from customers, read what they have said about us!
Erta Ale eruption
Overflowing lava lake 17 Jan 2017
Sakurajima crisis 2015