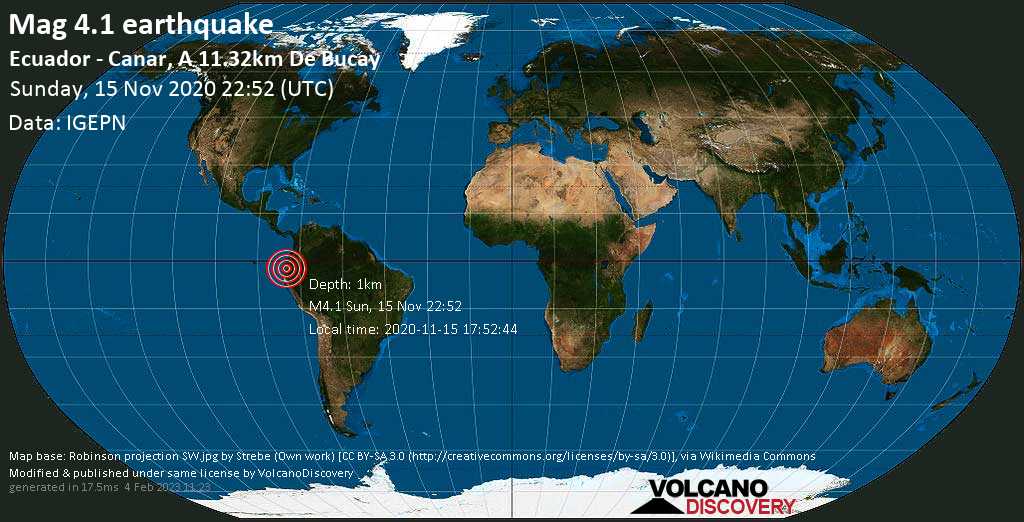 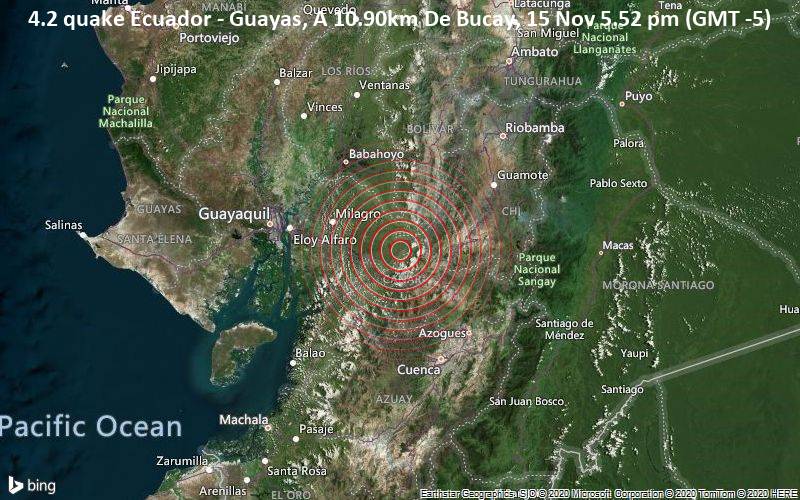 4.2 quake Ecuador - Guayas, A 10.90km De Bucay, 15 Nov 5.52 pm (GMT -5)
An earthquake of magnitude 4.2 occurred in the afternoon on Sunday 15 November 2020 at 5.52 pm local time near the town of La Troncal, Ecuador, as reported by the Institute of Geophysics of the National Polytechnic School in Quito (IGEPN).
According to preliminary data, the quake was located at a very shallow depth of 5 km. Shallow earthquakes are felt more strongly than deeper ones as they are closer to the surface. The exact magnitude, epicenter, and depth of the quake might be revised within the next few hours or minutes as seismologists review data and refine their calculations, or as other agencies issue their report.
Based on the preliminary seismic data, the quake was probably felt by many people in the area of the epicenter. It should not have caused significant damage, other than objects falling from shelves, broken windows, etc. Weak shaking might have been felt in La Troncal (pop. 36,400) located 19 km from the epicenter, Coronel Marcelino Maridueña (pop. 7,300) 24 km away, Naranjito (pop. 34,200) 30 km away, Alausí (pop. 14,300) 44 km away, Milagro (pop. 133,500) 44 km away, Eloy Alfaro (pop. 167,800) 71 km away, Cuenca (pop. 277,000) 72 km away, and Guayaquil (pop. 1,952,000) 74 km away.
If you were or still are in this area during the quake help others with your feedback and file a quick report here.
Download the Volcanoes & Earthquakes app to get one of the fastest seismic alerts online:
Android | IOS

Volcano Calendar 2016: We're proud to present our new volcano calendar 2016: 13 different and attractive images of volcanoes, volcanic landscapes and phenomena taken during volcano tours over the past few years.
Kelut

Kelut volcano photos: A new lava dome grew inside the crater lake during the effusive eruption in late 2007, replacing most of the lake. Watch the birth of a new mountain!
What is a volcano?

Definition of a volcano: A volcano is the term for any place on the surface of the earth, where hot molten rock (magma) reaches the surface.
Books