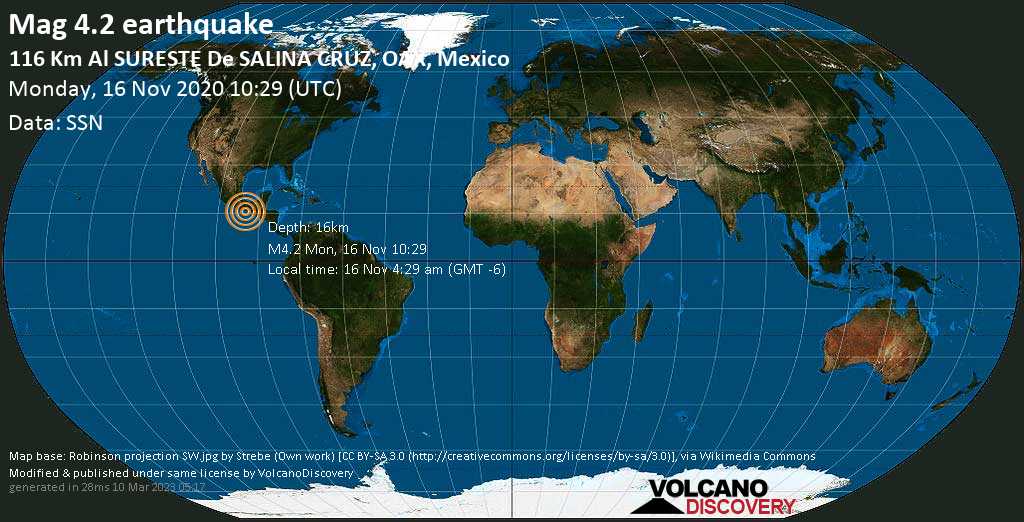 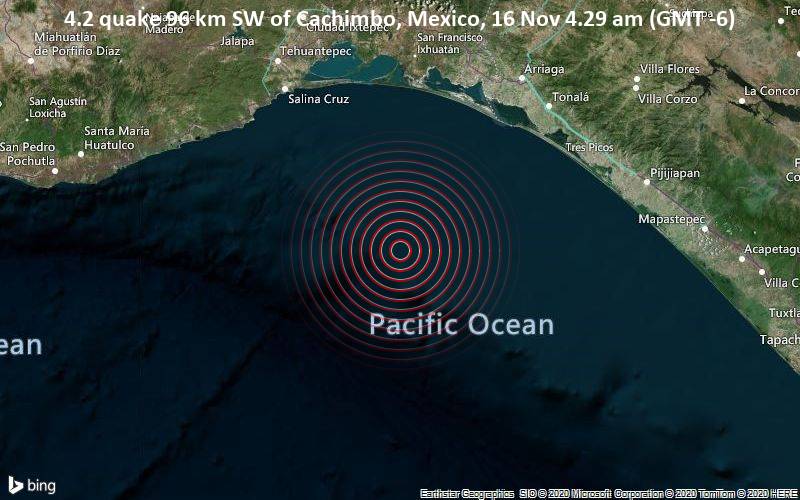 4.2 quake 96 km SW of Cachimbo, Mexico, 16 Nov 4.29 am (GMT -6)
Mexico's National Seismological Service (SSN) reported a magnitude 4.2 quake in Mexico near the village of Cachimbo only 27 minutes ago. The earthquake hit early morning on Monday 16 November 2020 at 4.29 am local time at a shallow depth of 16 km. The exact magnitude, epicenter, and depth of the quake might be revised within the next few hours or minutes as seismologists review data and refine their calculations, or as other agencies issue their report.
Our monitoring service at VolcanoDiscovery identified a second report from the European-Mediterranean Seismological Centre (EMSC) which listed the quake at magnitude 4.2 as well.
Towns or cities near the epicenter where the quake might have been felt as very weak shaking include Cachimbo (pop. 100) located 96 km from the epicenter.
Download the Volcanoes & Earthquakes app to get one of the fastest seismic alerts online:
Android | IOS

Etna volcano photos: Etna - Europe's largest and most active volcano is a universe in itself. Browse through our collection spanning almost 20 years of eruptions and more.
Subduction zones

Convergent plate boundaries and subduction zones: As an oceanic plates collides with another plate, it is subducted and generates volcanism on the overlying plate.
Volcanoes and Spices

17 days volcano trekking: This is one of our most exciting volcano tours! Halmahera, North Sulawesi and the Sangihe Islands are not only very scenic and interesting as well as nearly unspoiled by tourism, but also home to some of the country's most active (and often erupting) volcanoes, inclduing Dukono, Ibu, Lokon, Soputan and Karangetang.
Volcano News