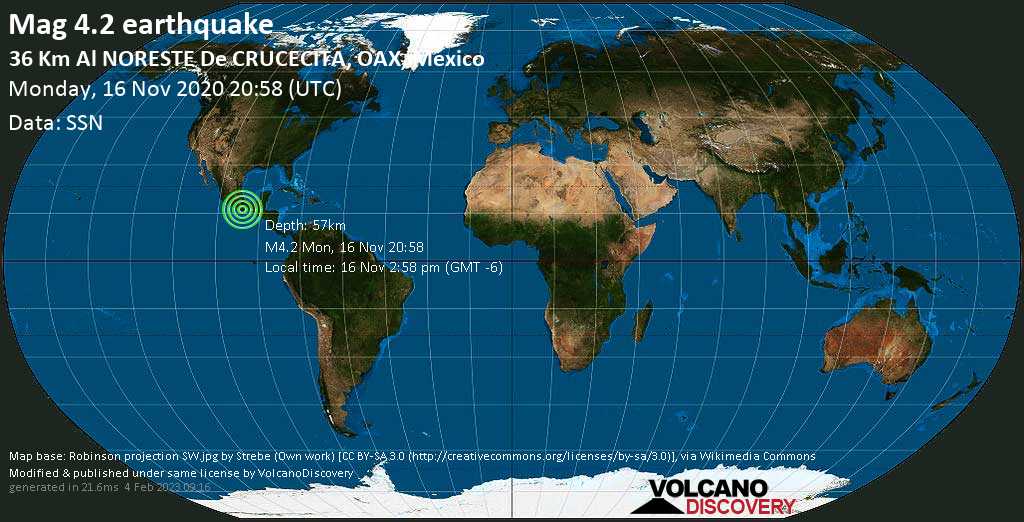 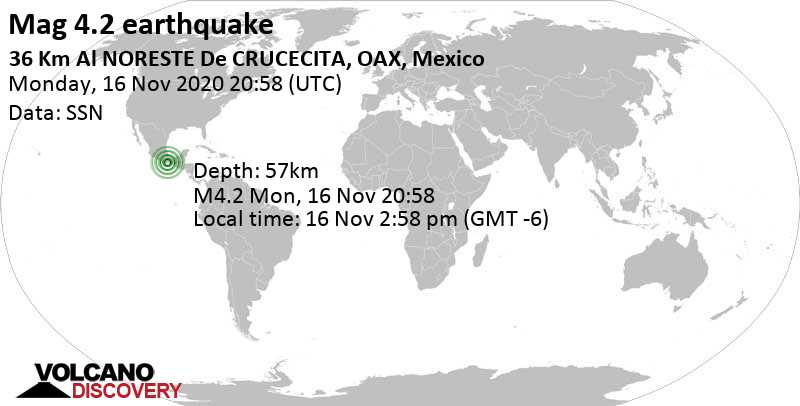 16 Nov 21:14 UTC: First to report: SSN after 16 minutes.
Update Mon, 16 Nov 2020, 21:15
Light earthquake of magnitude 4.2 just reported 78 km southwest of Salina Cruz, Mexico
4.2 quake 19 km NE of Santa María Xadani, Mexico, 16 Nov 2.58 pm (GMT -6)
A moderately shallow magnitude 4.2 earthquake was reported early afternoon near the village of Guadalupe Victoria, Mexico.
According to Mexico's National Seismological Service (SSN), the quake hit on Monday 16 November 2020 at 2.58 pm local time at a moderately shallow depth of 57 km. The exact magnitude, epicenter, and depth of the quake might be revised within the next few hours or minutes as seismologists review data and refine their calculations, or as other agencies issue their report.
Based on the preliminary seismic data, the quake should not have caused any significant damage, but was probably felt by many people as light vibration in the area of the epicenter. Weak shaking might have been felt in Guadalupe Victoria (pop. 900) located 2 km from the epicenter, San Miguel Chongos (pop. 500) 6 km away, San Isidro Chacalapa (pop. 400) 11 km away, San José Chiltepec (pop. 400) 13 km away, and Santa María Petatengo (pop. 600) 13 km away.
Towns or cities near the epicenter where the quake might have been felt as very weak shaking include Salina Cruz (pop. 73,600) located 78 km from the epicenter, Santo Domingo Tehuantepec (pop. 37,400) 79 km away, and Miahuatlán de Porfirio Díaz (pop. 23,900) 81 km away.
Download the Volcanoes & Earthquakes app and get one of the fastest seismic alerts online:
Android | iOS

User reports estimate the perceived ground shaking intensity according to the MMI (Modified Mercalli Intensity) scale.
Contribute:
Leave a comment if you find a particular report interesting or want to add to it.
Flag as inappropriate.
Mark as helpful or interesting.
Send your own user report!
Translate
Cape Town / not felt / rattling, vibrating / 5-10 s : Heard a loud noise as if there was a plane flying and shortly after, there was a tremor. The whole house shook
Try our free app!