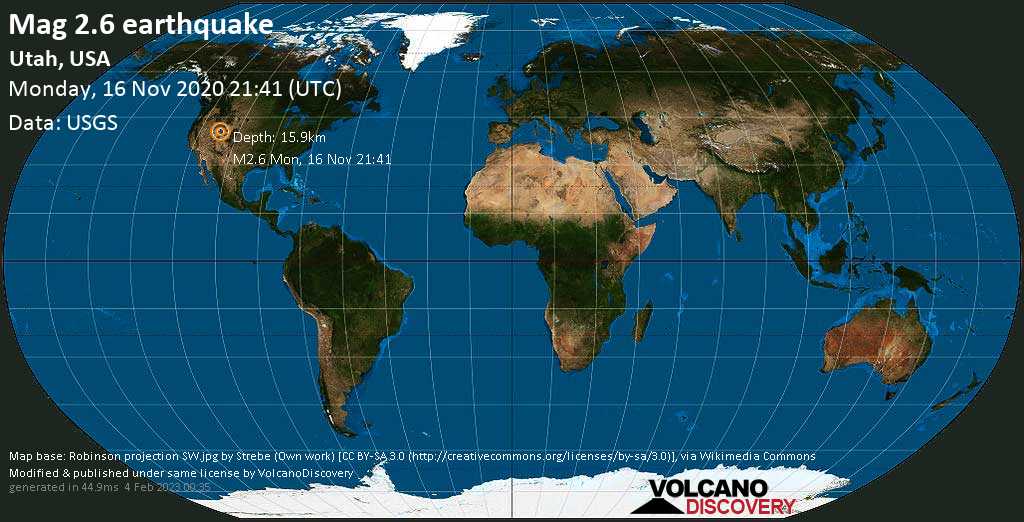 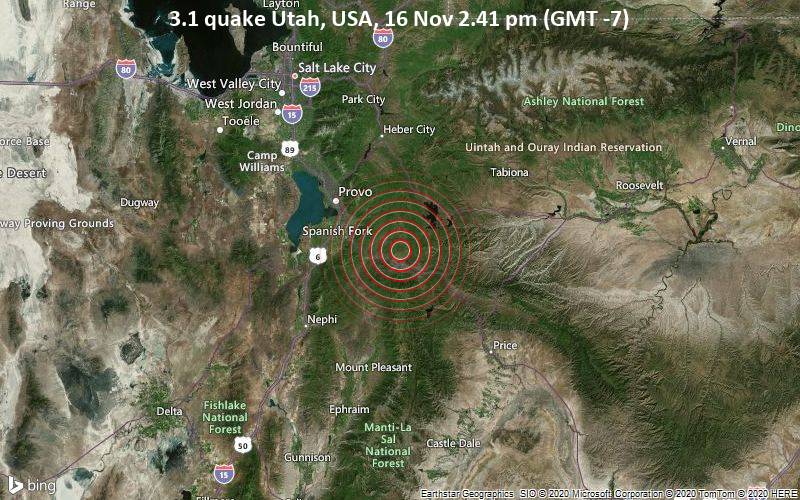 3.1 quake Utah, USA, 16 Nov 2.41 pm (GMT -7)
A magnitude 3.1 earthquake was reported only 26 minutes ago by the United States Geological Survey (USGS), considered the key international and national agency that monitors seismic activity in the US. The earthquake occurred at a very shallow depth of 2.7 miles beneath the epicenter early afternoon on Monday 16 November 2020 at 2.41 pm local time. The exact magnitude, epicenter, and depth of the quake might be revised within the next few hours or minutes as seismologists review data and refine their calculations, or as other agencies issue their report.
A second report was later issued by the European-Mediterranean Seismological Centre (EMSC), which listed it as a magnitude 3.1 earthquake as well.
Despite its relatively small magnitude, the quake could probably be felt very close to the epicenter. Towns or cities near the epicenter where the quake might have been felt as very weak shaking include Mapleton (pop. 9,200) located 16 miles from the epicenter, Woodland Hills (pop. 1,500) 18 miles away, Springville (pop. 32,300) 18 miles away, Spanish Fork (pop. 37,900) 19 miles away, Independence (pop. 200) 19 miles away, Salem (pop. 7,500) 19 miles away, Provo (pop. 115,300) 23 miles away, and Orem (pop. 94,500) 27 miles away.
If you were or still are in this area during the quake help others with your feedback and file a quick report here.
Download the Volcanoes & Earthquakes app to get one of the fastest seismic alerts online:
Android | IOS


Most recent quakes Top 20 quakes past 24 hrs Quakes in the US Utah
Get quake alerts via our apps!
Android App iOS App

User reports estimate the perceived ground shaking intensity according to the MMI (Modified Mercalli Intensity) scale.
At magnitude 2.6, this quake might have been felt very close to the epicenter and under calm conditions.
Contribute:
Leave a comment if you find a particular report interesting or want to add to it.
Flag as inappropriate.
Mark as helpful or interesting.
Send your own user report!
San Tan Valley, Arizona (782.3 km S of epicenter) [Map] / Weak shaking (MMI III) / vibration and rolling / 2-5 s : Felt and heard the Earth move. Was laying down and still when I experienced it.
802.7 km S of epicenter [Map] / Very weak shaking (MMI II) / vibration and rolling / 2-5 s : Laying on bed and felt the Earth move. It was subtle. I could hear the Earth rumble too.
cape town south africa / Moderate shaking (MMI V)
to top

Click here to search our database for earlier earthquakes in the same area since 1900!
Most recent quakes Top 20 quakes past 24 hrs Quakes in the US Utah
Get quake alerts via our apps!
Android App iOS App
to top
First visit to our site? If you havn't done it yet, download the Volcanoes & Earthquakes app to get one of the fastest seismic alerts online:
Android | IOS

Ubinas activity updates: The most frequently active volcano in Peru entered a new eruptive phase in 2014. Updates and news are regularly posted on this page.
Chile 7-16 Dec 2020

Solar Eclipse & volcano tour: A total solar eclipse will occur on 14 Dec 2020 and pass over southern Chile and Argentina. Chile's most active volcano Villarrica is located exactly on the center line where the eclipse will be best to observe.
We offer you the unique chance to combine the eclipse with a tour to one the world's most beautiful volcanic areas - the Lake District in Chile.
Guatemala

Guatemala photos: Guatemala - a land of volcanoes and the colorful Mayan culture with incredible variety. A dream destination for volcano enthusiasts and photographers!
Krakatoa video