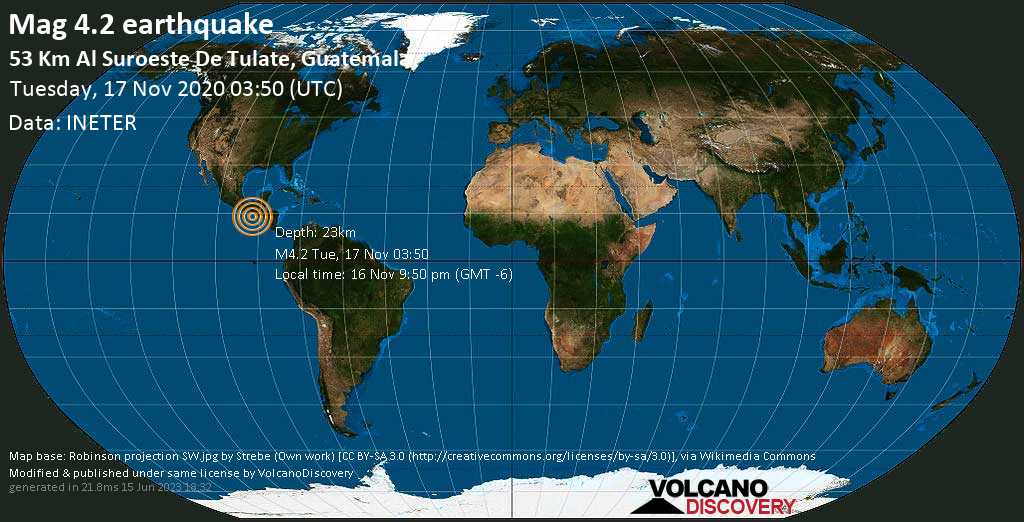 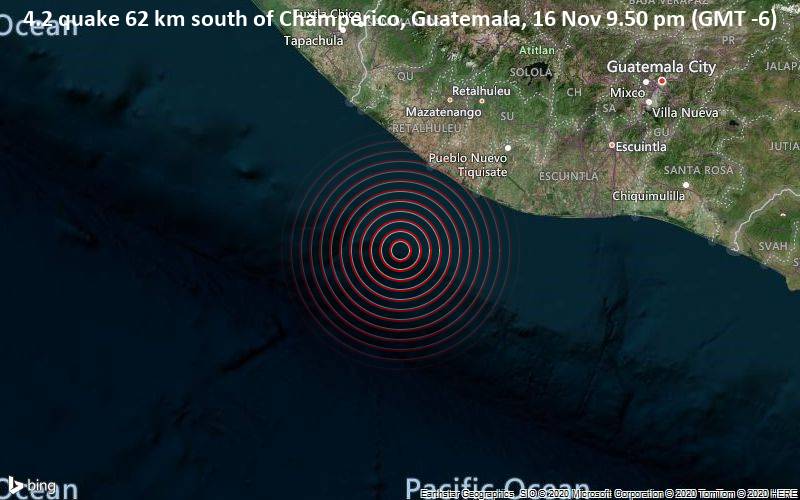 4.2 quake 62 km south of Champerico, Guatemala, 16 Nov 9.50 pm (GMT -6)
Just 22 minutes ago, a 4.2-magnitude earthquake struck near the town of Champerico, Guatemala. The tremor was recorded in the evening on Monday 16 November 2020 at 9.50 pm local time, at a shallow depth of 23 km below the surface.
The event was filed by the Nicaraguan Institute of Territorial Studies (INETER), the first seismological agency to report it.
A second report was later issued by Mexico's National Seismological Service (SSN), which listed it as a magnitude 4.3 earthquake. A third agency, the European-Mediterranean Seismological Centre (EMSC), reported the same quake at magnitude 4.3.
Based on the preliminary seismic data, the quake should not have caused any significant damage, but was probably felt by many people as light vibration in the area of the epicenter. Weak shaking might have been felt in Champerico (pop. 7,800) located 62 km from the epicenter.
Towns or cities near the epicenter where the quake might have been felt as very weak shaking include Nueva Concepción (pop. 11,100) located 87 km from the epicenter, Tiquisate (pop. 18,200) 88 km away, Ocós (pop. 9,500) 89 km away, Retalhuleu (pop. 36,700) 93 km away, Santo Domingo Suchitepéquez (pop. 6,300) 95 km away, San Sebastián (pop. 14,800) 98 km away, and Nuevo San Carlos (pop. 19,200) 99 km away.
If you were or still are in this area during the quake help others with your feedback and file a quick report here.
Download the Volcanoes & Earthquakes app to get one of the fastest seismic alerts online:
Android | IOS


Most recent quakes Top 20 quakes past 24 hrs Quakes in Guatemala
Get quake alerts via our apps!
Android App iOS App

Most recent quakes Top 20 quakes past 24 hrs Quakes in Guatemala
Get quake alerts via our apps!
Android App iOS App
to top
First visit to our site? If you havn't done it yet, download the Volcanoes & Earthquakes app to get one of the fastest seismic alerts online:
Android | IOS

Photos from Germany: Germany has a large number of volcanoes - most of them extinct, but the Eifel volcanic field is still potentially active.
Bromo eruption 2010-11

Photos from Mt Bromo in eruption during 2010-11: The most recent eruption of famous Mt Bromo volcano in East Java, Indonesia.
Volcano Calendar 2016