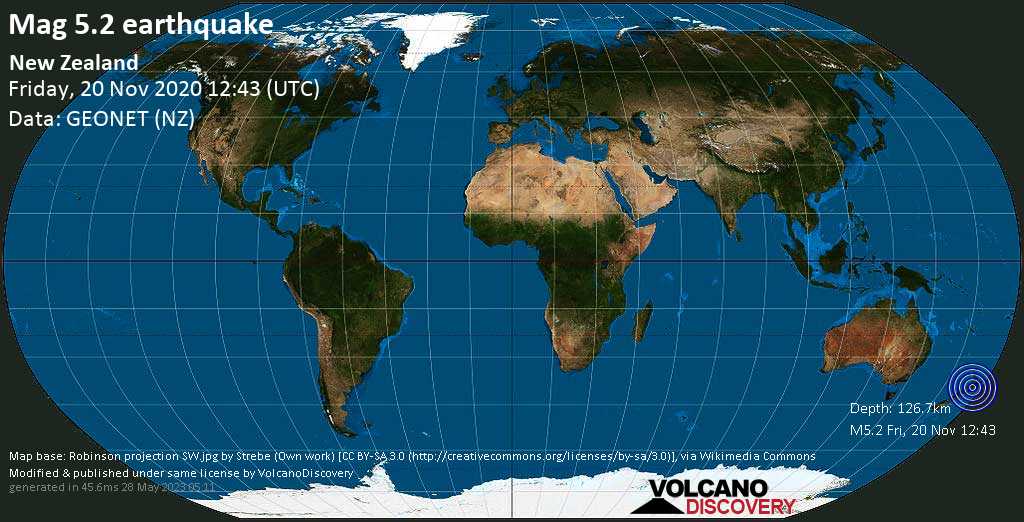 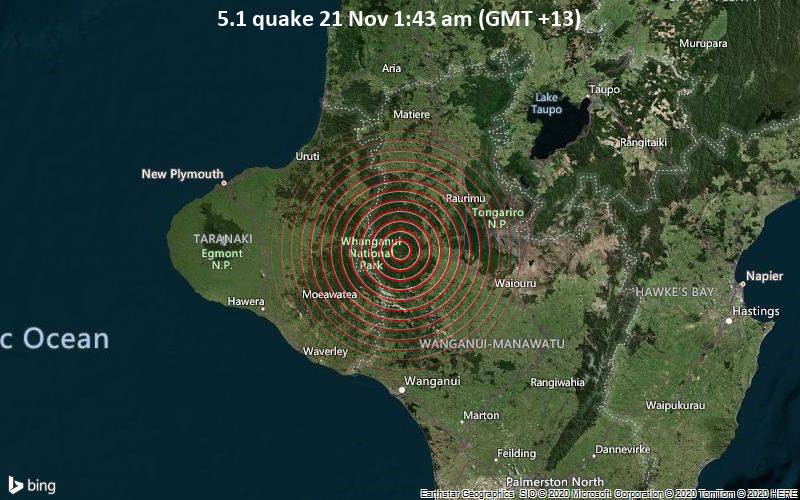 5.1 quake 21 Nov 1:43 am (GMT +13)
An earthquake of magnitude 5.1 occurred early morning on Saturday 21 November 2020 at 1.43 am local time near the village of National Park, New Zealand, as reported by New Zealand's Earthquake Commission and Geological Survey (GeoNet).
According to preliminary data, the quake was located at an intermediate depth of 128 km. The strength of the earthquake may have been tempered by its relative great depth below the surface, which makes it feel weaker in absolute terms. The exact magnitude, epicenter, and depth of the quake might be revised within the next few hours or minutes as seismologists review data and refine their calculations, or as other agencies issue their report.
A second report was later issued by the European-Mediterranean Seismological Centre (EMSC), which listed it as a magnitude 4.8 earthquake.
Based on the preliminary seismic data, the quake should not have caused any significant damage, but was probably felt by many people as light vibration in the area of the epicenter. Weak shaking might have been felt in National Park (pop. 500) located 36 km from the epicenter, Ohura (pop. 200) 57 km away, Waiouru (pop. 1,300) 57 km away, Waverley (pop. 900) 58 km away, Meremere (pop. 400) 62 km away, Palmerston North (pop. 76,000) 123 km away, Rotorua (pop. 65,900) 170 km away, and Hamilton (pop. 152,600) 175 km away.
VolcanoDiscovery will automatically update magnitude and depth if these change and follow up if other significant news about the quake become available. If you’re in the area, please send us your experience through our reporting mechanism, either online or via our mobile app. This will help us provide more first-hand updates to anyone around the globe who wants to know more about this quake.
If you were or still are in this area during the quake help others with your feedback and file a quick report here.
Download the Volcanoes & Earthquakes app to get one of the fastest seismic alerts online:
Android | IOS

Ijen volcano photos: Ijen volcano in East Java is famous for its turquoise acid crater lake and the large sulfur deposits that are being mined by local workers. At night, the scene is illuminated by ghostly blue flames, as sulfur ignites.
Tour types

Tour photos Sep 2018: Impressions from our Tour to Kamchakta during Sep 2018: northern group of volcanoes, Karymsky, and the southern plateau with Mutnovsky and Gorely.
Smoke rings