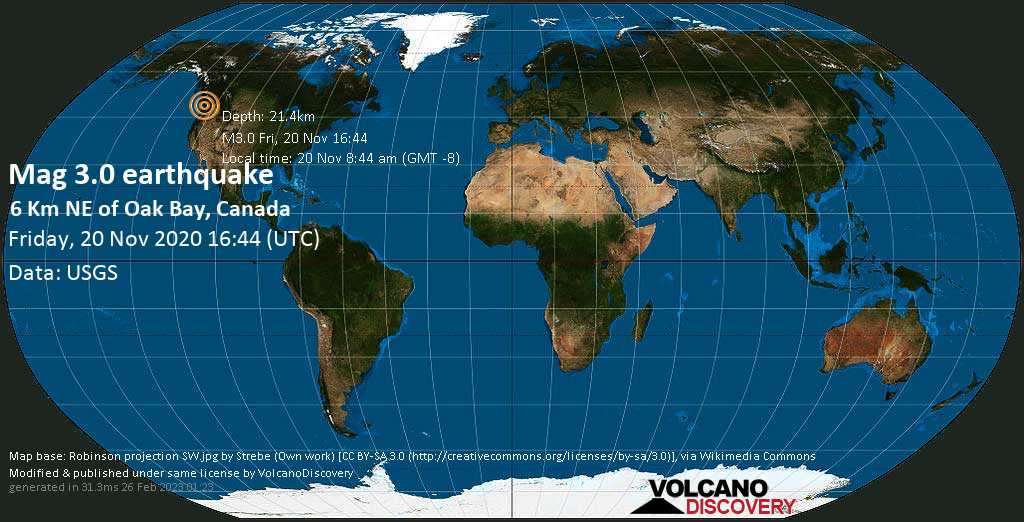 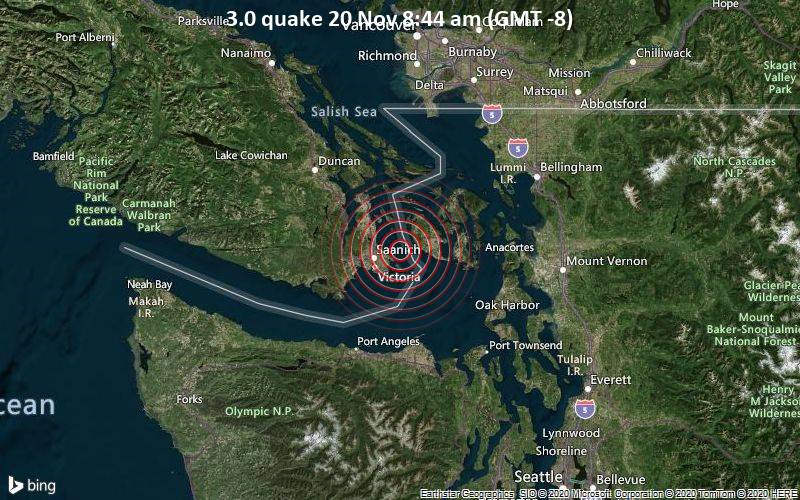 3.0 quake 20 Nov 8:44 am (GMT -8)
A magnitude 3.0 earthquake was reported 30 minutes ago by the United States Geological Survey (USGS), considered one of the key international agencies that monitor seismic activity worldwide. The earthquake occurred at a shallow depth of 13 miles beneath the epicenter in the morning on Friday 20 November 2020 at 8.44 am local time. Magnitude and other quake parameters can still change in the coming hours as the agency continues to process seismic data.
Our monitoring service at VolcanoDiscovery identified a second report from the European-Mediterranean Seismological Centre (EMSC) which listed the quake at magnitude 3.0 as well.
Despite its relatively small magnitude, the quake could probably be felt very close to the epicenter. Towns or cities near the epicenter where the quake might have been felt as very weak shaking include Oak Bay (pop. 18,000) located 4 miles from the epicenter, Victoria (pop. 289,600) 7 miles away, Six Mile (pop. 1000) 11 miles away, Colwood (pop. 14,700) 12 miles away, Langford (pop. 22,500) 13 miles away, North Saanich (pop. 11,100) 15 miles away, and Metchosin (pop. 4,800) 16 miles away. In Duncan (pop. 22,200, 29 miles away), the quake was probably not felt.
If you were or still are in this area during the quake help others with your feedback and file a quick report here.
Download the Volcanoes & Earthquakes app to get one of the fastest seismic alerts online:
Android | IOS

Volcano Calendars: We have published several volcano calendars over the years: usually, we use photos taken by us or our participants during our recent volcano tours and expeditions. A perfect gift if you're a fan of volcanoes!
China's volcanoes