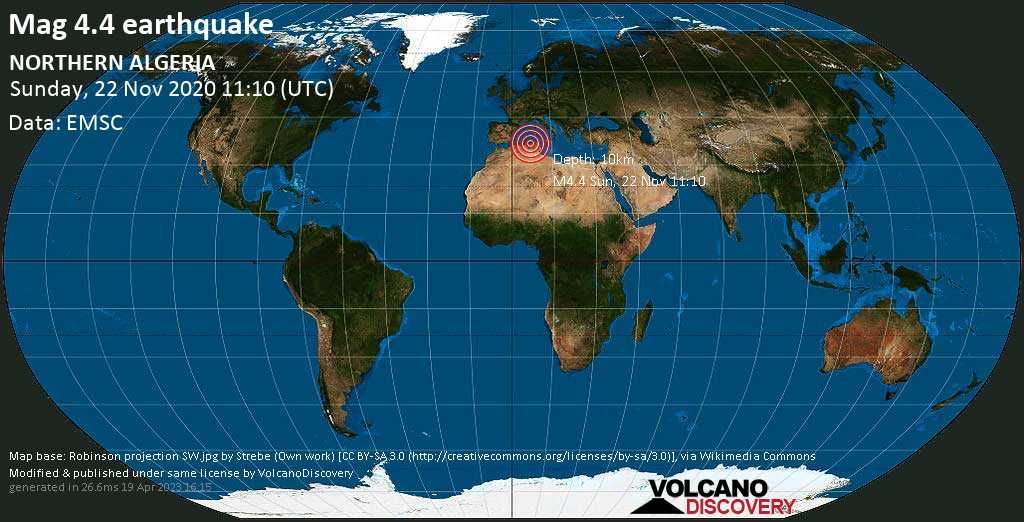 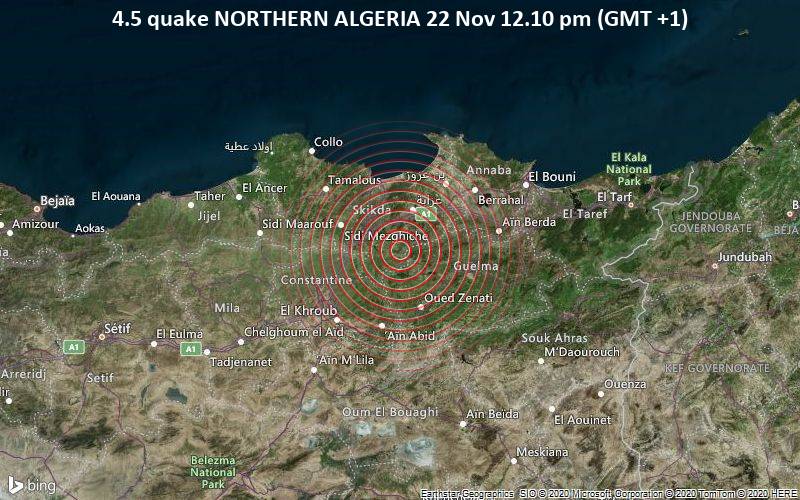 4.5 quake NORTHERN ALGERIA 22 Nov 12.10 pm (GMT +1)
A magnitude 4.5 earthquake was reported only 5 minutes ago by the European-Mediterranean Seismological Centre (EMSC), considered one of the key international agencies that monitor seismic activity worldwide. The earthquake occurred at a very shallow depth of 5 km beneath the epicenter around noon on Sunday 22 November 2020 at 12.10 pm local time. The exact magnitude, epicenter, and depth of the quake might be revised within the next few hours or minutes as seismologists review data and refine their calculations, or as other agencies issue their report.
Based on the preliminary seismic data, the quake was probably felt by many people in the area of the epicenter. It should not have caused significant damage, other than objects falling from shelves, broken windows, etc. Weak shaking might have been felt in Azzaba (pop. 75,300) located 20 km from the epicenter, Skikda (pop. 162,700) 36 km away, Guelma (pop. 123,600) 37 km away, Héliopolis (pop. 40,100) 37 km away, Didouche Mourad (pop. 25,800) 38 km away, ’Aïn Abid (pop. 29,500) 39 km away, Constantine (pop. 450,100) 44 km away, and Annaba (pop. 206,600) 74 km away.
VolcanoDiscovery will automatically update magnitude and depth if these change and follow up if other significant news about the quake become available. If you’re in the area, please send us your experience through our reporting mechanism, either online or via our mobile app. This will help us provide more first-hand updates to anyone around the globe who wants to know more about this quake.
If you were or still are in this area during the quake help others with your feedback and file a quick report here.
Download the Volcanoes & Earthquakes app to get one of the fastest seismic alerts online:
Android | IOS

Round-the-world volcano tour: Have you ever dreamt of travelling around the world? VolcanoDiscovery makes this dream come true.
Lava and water

Photos from Kilauea volcano: lava flowing into the sea
Volcanoes in Africa

List and map of all volcanoes in Africa. Most volcanoes are located in the Great Rift Valley, but there are more.
Volcanoes and Spices