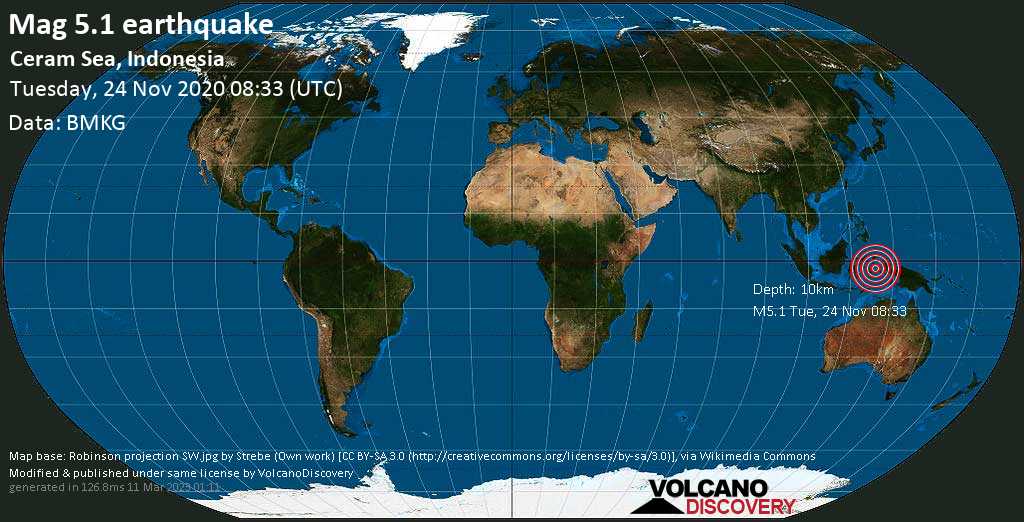 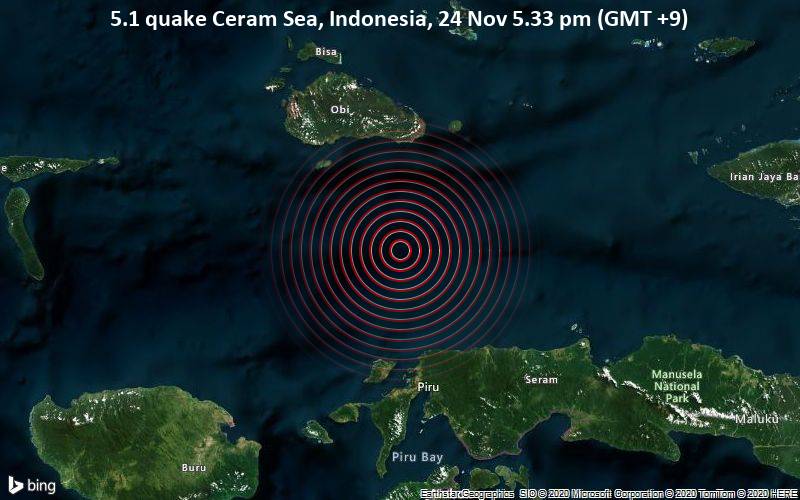 5.1 quake Ceram Sea, Indonesia, 24 Nov 5.33 pm (GMT +9)
An earthquake of magnitude 5.1 occurred in the afternoon on Tuesday 24 November 2020 at 5.33 pm local time near Amahai, Indonesia, as reported by Indonesia's Meteorology, Climatology, and Geophysical Agency (BMKG).
According to preliminary data, the quake was located at a shallow depth of 10 km. Shallow earthquakes are felt more strongly than deeper ones as they are closer to the surface. The exact magnitude, epicenter, and depth of the quake might be revised within the next few hours or minutes as seismologists review data and refine their calculations, or as other agencies issue their report.
A second report was later issued by the European-Mediterranean Seismological Centre (EMSC), which listed it as a magnitude 5.0 earthquake.
Based on the preliminary seismic data, the quake should not have caused any significant damage, but was probably felt by many people as light vibration in the area of the epicenter. Weak shaking might have been felt in Amahai (pop. 47,700) located 151 km from the epicenter, and Ambon (pop. 355,600) 155 km away.
VolcanoDiscovery will automatically update magnitude and depth if these change and follow up if other significant news about the quake become available. If you’re in the area, please send us your experience through our reporting mechanism, either online or via our mobile app. This will help us provide more first-hand updates to anyone around the globe who wants to know more about this quake.
Download the Volcanoes & Earthquakes app to get one of the fastest seismic alerts online:
Android | IOS

29.6°C (85 F), humidity: 71%, wind: 4 m/s (8 kts) from W
Primary data source: BMKG (Meteorological, Climatological, and Geophysical Agency of Indonesia)
Estimated released energy: 2.8 x 1012 joules (783 megawatt hours, equivalent to 674 tons of TNT) More info
[show map]
Show interactive Map
[smaller] [bigger]
If you felt this quake (or if you were near the epicenter), please share your experience and submit a short "I felt it" report! Other users would love to hear about it!
Also if you did NOT feel the quake although you were in the area, please report it! Your contribution is valuable also to earthquake science and earthquake hazard analysis and mitigation efforts. You can use your device location or the map to indicate where you were during the earthquake. Thank you!