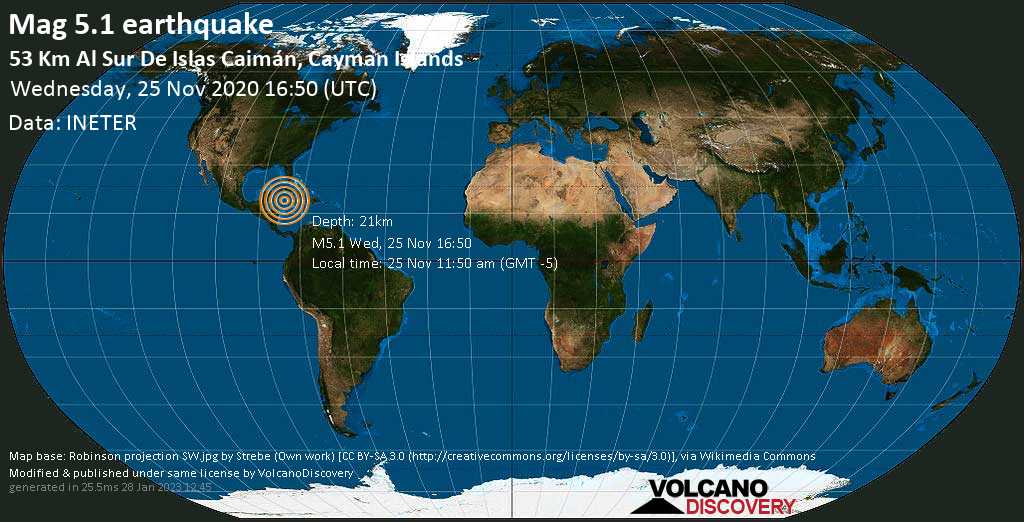 5.1 quake 25 Nov 11:50 am (GMT -5)
Just 16 minutes ago, a 5.1-magnitude earthquake struck near Bodden Town, Cayman Islands. The tremor was recorded in the morning on Wednesday 25 November 2020 at 11.50 am local time, at a shallow depth of 21 km below the surface.
The event was filed by the Nicaraguan Institute of Territorial Studies (INETER), the first seismological agency to report it.
Based on the preliminary seismic data, the quake was probably felt by many people in the area of the epicenter. It should not have caused significant damage, other than objects falling from shelves, broken windows, etc. Weak shaking might have been felt in Bodden Town (pop. 10,300) located 47 km from the epicenter, East End (pop. 1,600) 51 km away, George Town (pop. 29,400) 51 km away, North Side (pop. 1,200) 55 km away, and West Bay (pop. 11,300) 61 km away.
VolcanoDiscovery will automatically update magnitude and depth if these change and follow up if other significant news about the quake become available. If you’re in the area, please send us your experience through our reporting mechanism, either online or via our mobile app. This will help us provide more first-hand updates to anyone around the globe who wants to know more about this quake.
Download the Volcanoes & Earthquakes app to get one of the fastest seismic alerts online:
Android | IOS