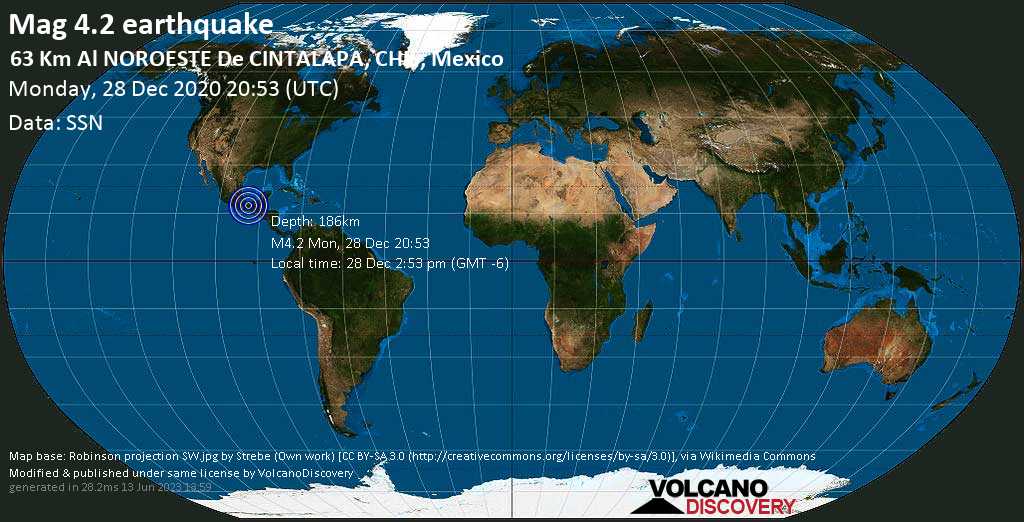 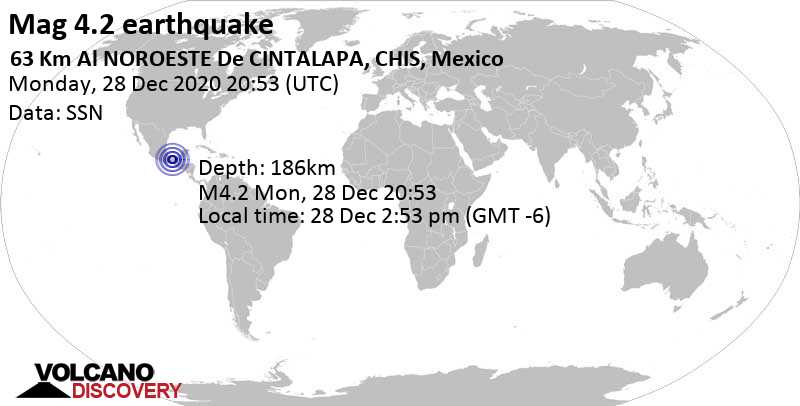 28 Dec 21:11 UTC: First to report: EMSC after 18 minutes.
28 Dec 21:14: Now using data updates from SSN
Update Mon, 28 Dec 2020, 21:15
Light magnitude 4.2 earthquake 11 km northeast of Nuevo Cordoba, Mexico
4.2 quake 28 Dec 2:53 pm (GMT -6)
An earthquake of magnitude 4.2 occurred early afternoon on Monday 28 December 2020 at 2:53 pm local time near Nuevo Cordoba, Uxpanapa, Veracruz, Mexico, as reported by Mexico's National Seismological Service (SSN).
According to preliminary data, the quake was located at an intermediate to considerable depth of 186 km. The strength of the earthquake may have been tempered by its relative great depth below the surface, which makes it feel weaker in absolute terms. The exact magnitude, epicenter, and depth of the quake might be revised within the next few hours or minutes as seismologists review data and refine their calculations, or as other agencies issue their report.
A second report was later issued by the European-Mediterranean Seismological Centre (EMSC), which listed it as a magnitude 4.2 earthquake as well.
According to preliminary calculations, we do not expect that the quake was felt by many people and did not cause any damage. In Nuevo Cordoba (pop. 120, 11 km away), Primitivo R. Valencia (pop. 74, 12 km away), El Desengaño (pop. 350, 16 km away), San Francisco la Paz (pop. 630, 19 km away), General Valerio Trujano (pop. 190, 19 km away), La Lucha (pop. 240, 20 km away), Los Liberales (pop. 330, 22 km away), and Rafael Murillo Vidal (pop. 470, 23 km away), the quake was probably not felt.
Download the Volcanoes & Earthquakes app and get one of the fastest seismic alerts online:
Android | iOS