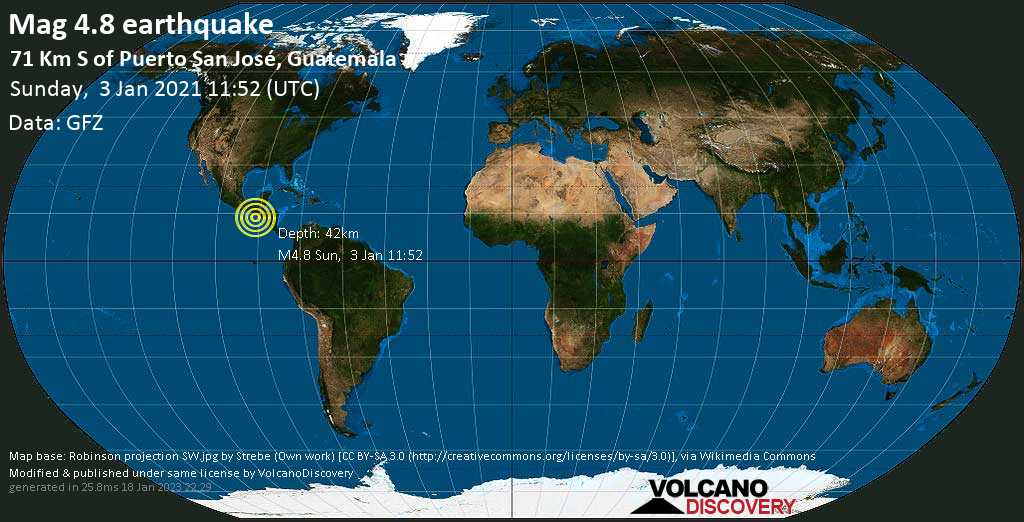 3 Jan 12:01 UTC: First to report: GFZ after 8 minutes.
3 Jan 13:45: Hypocenter depth recalculated from 10.0 to 42.0 km (from 6.2 to 26 mi). Epicenter location corrected by 25 km (16 mi) towards NE.
Update Sun, 3 Jan 2021, 12:06
Light magnitude 4.8 quake hits 82 km south of Puerto San José, Guatemala early morning
4.8 quake 3 Jan 5:52 am (GMT -6)
The German Research Centre for Geosciences (GFZ) reported a magnitude 4.8 quake in Guatemala near Puerto San José, Municipio de San José, Departamento de Escuintla, only 13 minutes ago. The earthquake hit early morning on Sunday 3 January 2021 at 5:52 am local time at a shallow depth of 10 km. The exact magnitude, epicenter, and depth of the quake might be revised within the next few hours or minutes as seismologists review data and refine their calculations, or as other agencies issue their report.
Our monitoring service identified a second report from the European-Mediterranean Seismological Centre (EMSC) which listed the quake at magnitude 4.6.
Based on the preliminary seismic data, the quake should not have caused any significant damage, but was probably felt by many people as light vibration in the area of the epicenter.
Weak shaking might have been felt in Puerto San José (pop. 18,700) located 82 km from the epicenter, and Iztapa (pop. 4,000) 85 km away.
Other towns or cities near the epicenter where the quake might have been felt as very weak shaking include La Gomera (pop. 24,000) located 99 km from the epicenter.
VolcanoDiscovery will automatically update magnitude and depth if these change and follow up if other significant news about the quake become available. If you’re in the area, please send us your experience through our reporting mechanism, either online or via our mobile app. This will help us provide more first-hand updates to anyone around the globe who wants to know more about this quake.
Download the Volcanoes & Earthquakes app to get one of the fastest seismic alerts online:
Android | IOS

27.3°C (81 F), humidity: 79%, wind: 6 m/s (11 kts) from NNW
Primary data source: GFZ (German Research Centre for Geosciences)
Estimated released energy: 1 x 1012 joules (278 megawatt hours, equivalent to 239 tons of TNT) More info
[show map]
Show interactive Map
[smaller] [bigger]
If you felt this quake (or if you were near the epicenter), please share your experience and submit a short "I felt it" report! Other users would love to hear about it!
Also if you did NOT feel the quake although you were in the area, please report it! Your contribution is valuable also to earthquake science and earthquake hazard analysis and mitigation efforts. You can use your device location or the map to indicate where you were during the earthquake. Thank you!

Info: The more agencies report about the same quake and post similar data, the more confidence you can have in the data. It takes normally up to a few hours until earthquake parameters are calculated with near-optimum precision.
Most recent quakes Top 20 quakes past 24 hrs Quakes in El Salvador

User reports estimate the perceived ground shaking intensity according to the MMI (Modified Mercalli Intensity) scale.
Contribute:
Leave a comment if you find a particular report interesting or want to add to it.
Flag as inappropriate.
Mark as helpful or interesting.
Send your own user report!
El Cajon, San Diego County, California (3419.3 km NW of epicenter) [Map] / Weak shaking (MMI III) / complex motion difficult to describe / very short : Heard five very distinct heavy bop bop bops faintly in a quick procession, which startled me in the living room. Did not feel anything. But heard this within the wall of my where my front door is located, at the front side of my house. Startled me. As soon as the noise within that one entry wall stopped the as is seismograph I leave running 24/7 on loud for quakes all around the world started dinging! Not even a second after! The dogs which are never outside together on a cold night like this we | One user found this interesting.
3419.3 km NW of epicenter [Map] / Light shaking (MMI IV) / complex motion difficult to describe : Was picking up a few things in the living room when I heard this sort of very distinct detonation type of sound like when you would demo a building. Five distinct quick bop bop bop bops Like a faint pounding on a distant door. If it wasn't early in the in the morning here I probably would of never heard this noise. Was not felt definitely heard it. Could be heard within just the wall that our front door to the house was located. It scared me. The only reason I KNOW it was from this earthquake, i | One user found this interesting.
149.4 km NNE of epicenter [Map] / not felt (reported through our app)
Try our free app!