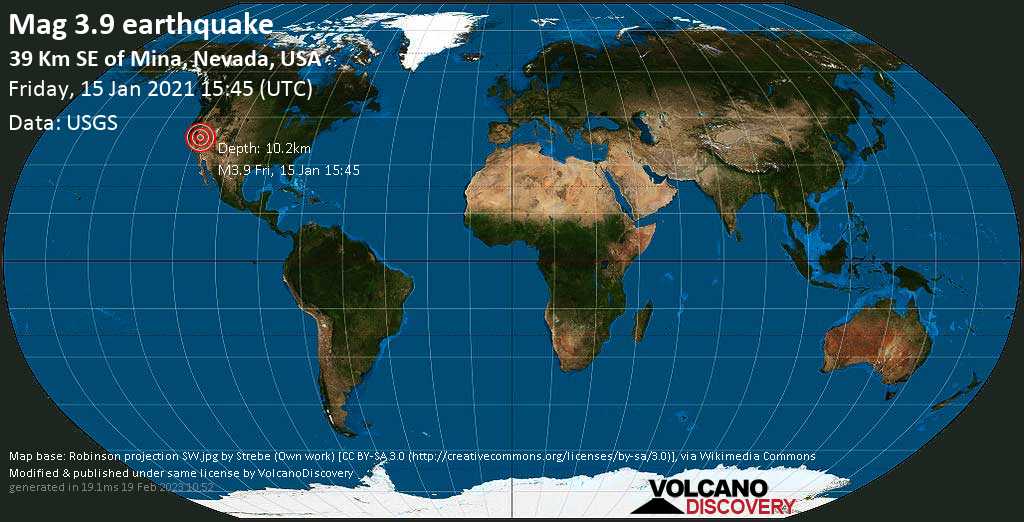 -3°C (27 F), humidity: 54%, wind: 4 m/s (7 kts) from NE
Primary data source: USGS (United States Geological Survey)
Estimated released energy: 4.5 x 1010 joules (12.4 megawatt hours, equivalent to 10.7 tons of TNT) More info
[show map]
Show interactive Map
[smaller] [bigger]
If you felt this quake (or if you were near the epicenter), please share your experience and submit a short "I felt it" report! Other users would love to hear about it!
Also if you did NOT feel the quake although you were in the area, please report it! Your contribution is valuable also to earthquake science and earthquake hazard analysis and mitigation efforts. You can use your device location or the map to indicate where you were during the earthquake. Thank you!

Info: The more agencies report about the same quake and post similar data, the more confidence you can have in the data. It takes normally up to a few hours until earthquake parameters are calculated with near-optimum precision.
Most recent quakes Top 20 quakes past 24 hrs Quakes in the US Nevada

User reports estimate the perceived ground shaking intensity according to the MMI (Modified Mercalli Intensity) scale.
Contribute:
Leave a comment if you find a particular report interesting or want to add to it.
Flag as inappropriate.
Mark as helpful or interesting.
Send your own user report!
SILVERPEAK NV (48.5 km S of epicenter) [Map] / Light shaking (MMI IV) / complex rolling (tilting in multiple directions) / 15-20 s : I am sea sick. I have Vertigo. This has not been a fun ride today. I just hunkered down in my recliner and waited for it to stop. It was like walking on mud inside. Nothing felt solid. Jello comes to mind. It is so subtle at first so you barely notice. | One user found this interesting. (reported through our app)
Tonopah / Light shaking (MMI IV)
312.6 km SE of epicenter [Map] / not felt (reported through our app)
Try our free app!