Our monitoring service AllQuakes received reports of an earthquake in or near Croatia at around 06:28 GMT. Unless confirmed by at least one national or international seismological agency, its status remains unconfirmed.
Quake Data | Interactive map | User Reports | Earlier quakes in same area | Quakes in Croatia 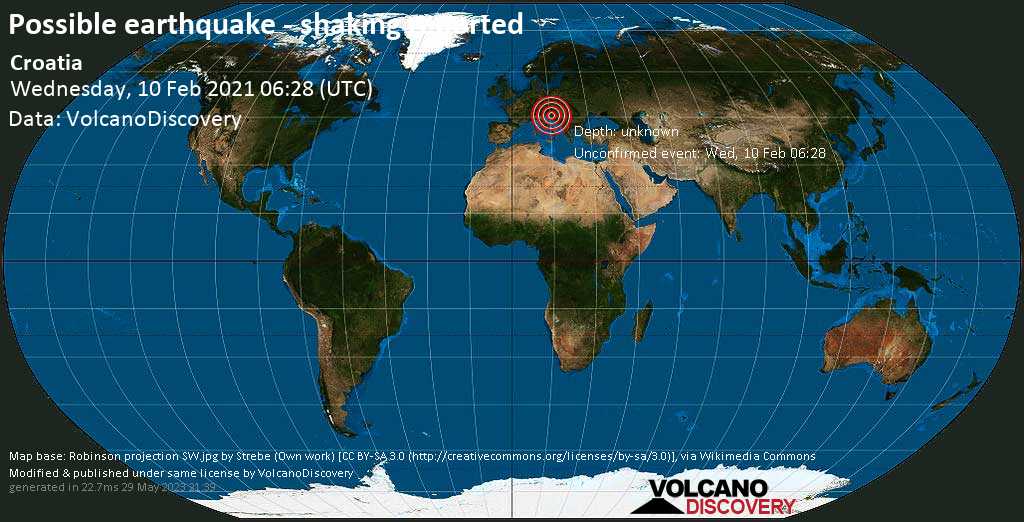 (Croatia)
Weather at epicenter at time of quake:
Overcast Clouds

3.3°C (38 F), humidity: 93%, wind: 3 m/s (6 kts) from S
Primary data source: VolcanoDiscovery
[show map]
Show interactive Map
[smaller] [bigger]
If you felt this quake (or if you were near the epicenter), please share your experience and submit a short "I felt it" report! Other users would love to hear about it!
Also if you did NOT feel the quake although you were in the area, please report it! Your contribution is valuable also to earthquake science and earthquake hazard analysis and mitigation efforts. You can use your device location or the map to indicate where you were during the earthquake. Thank you!

Info: The more agencies report about the same quake and post similar data, the more confidence you can have in the data. It takes normally up to a few hours until earthquake parameters are calculated with near-optimum precision.
Most recent quakes Top 20 quakes past 24 hrs Quakes in Croatia