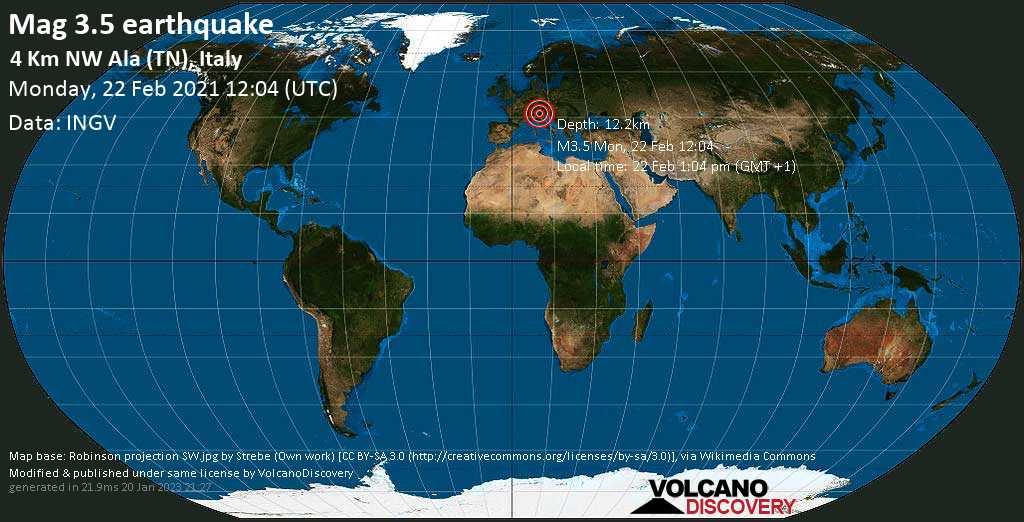 22 Feb 12:06 UTC: First to report: SED after 2 minutes.
22 Feb 12:20: Now using data updates from INGV
Update Mon, 22 Feb 2021, 13:12
Small aftershocks were recorded following the quake. None of these shocks were large enough to be felt.
Update Mon, 22 Feb 2021, 12:58
Magnitude 3.5 earthquake strikes near famous Garda Lake in northern Italy
3.5 quake 22 Feb 1:04 pm (GMT +1)
A shallow magnitude 3.5 earthquake hit near Italy's famous Garda lake on Monday, 22 Feb. 2021, at 1:04 pm local time. According to Italy's National Institute of Geophysics and Volcanology (INGV), the quake occurred at a shallow depth of 12 km. Shallow earthquakes are felt more strongly than deeper ones as they are closer to the surface.
The exact magnitude, epicenter, and depth of the quake might be revised within the next few hours or minutes as seismologists review data and refine their calculations, or as other agencies issue their report.
A second report was later issued by Austria's Central Research Institute for Meterology and Geodynamics in Vienna (ZAMG), which listed it as a magnitude 3.9 earthquake. Other agencies reporting the same quake include the Swiss Seismological Service (SED) at magnitude 3.7, and the European-Mediterranean Seismological Centre (EMSC) at magnitude 3.5.
Within minutes after the quake, we received numerous user reports describing the quake as weak shaking, especially from the town of Rovereto (pop. 34,200) located 13 km from the epicenter. Based on the feedback it appears the quake could be felt within a radius of 35 km around the epicenter.
There are no reports of damages.
Download the Volcanoes & Earthquakes app to get one of the fastest seismic alerts online:
Android | IOS

11.2°C (52 F), humidity: 57%, wind: 1 m/s (2 kts) from SSW
Primary data source: INGV (Istituto Nazionale di Geofisica e Vulcanologia)
Estimated released energy: 1.1 x 1010 joules (3.12 megawatt hours, equivalent to 2.68 tons of TNT) More info
[show map]
Show interactive Map
[smaller] [bigger]
If you felt this quake (or if you were near the epicenter), please share your experience and submit a short "I felt it" report! Other users would love to hear about it!
Also if you did NOT feel the quake although you were in the area, please report it! Your contribution is valuable also to earthquake science and earthquake hazard analysis and mitigation efforts. You can use your device location or the map to indicate where you were during the earthquake. Thank you!