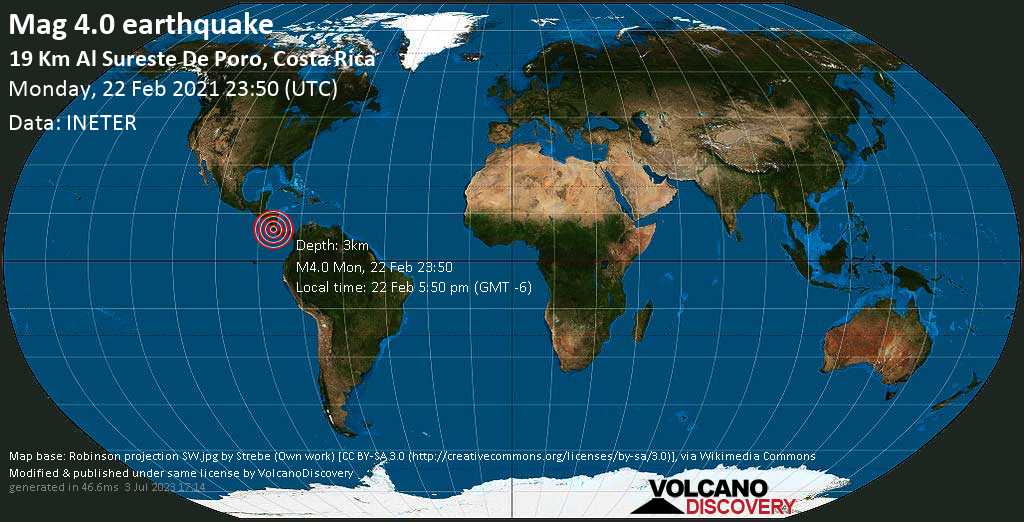 22 Feb 23:56 UTC: First to report: INETER after 6 minutes.
23 Feb 00:28: Magnitude recalculated from 3.9 to 4.0. Hypocenter depth recalculated from 10.0 to 7.0 km (from 6.2 to 4.3 mi).
23 Feb 00:42: Hypocenter depth recalculated from 7.0 to 3.0 km (from 4.3 to 1.9 mi).
Update Tue, 23 Feb 2021, 02:56
Magnitude 4.0 hit earthquake near capital of Costa Rica.
4.0 quake 22 Feb 5:50 pm (GMT -6)
A magnitude 4.0 earthquake hit near the City of San Jose, Costa Rica’s capital, on Monday afternoon, 22 Feb. 2021, at 5:50 pm local time. The quake occurred at a very shallow depth of 3 km at about 24 km distance from the city.
A second report was later issued by the United States Geological Survey, which listed it as a magnitude 3.9 earthquake. A third agency, the European-Mediterranean Seismological Centre (EMSC), reported the same magnitude as well.
Within minutes from the quake, our monitoring service received reports from users who felt the quake. The reports describe the quake as weak shaking. Those within an immediate 5 km radius from the epicenter further detailed the quake as a “double jolt” consisting of a light initial jolt, and a following stronger one. The earthquake was felt within a radius of about 30 km around the epicenter.
People also felt the quake in San Rafael (pop. 25,400) located 19 km from the epicenter, Aserri (pop. 25,900) 19 km away, San Felipe (pop. 25,000) 20 km away, San Miguel (pop. 28,800) 23 km away, Alajuela (pop. 47,500) 24 km away, and San Francisco de Heredia (pop. 21,900) 27 km away.
No damages were reported as a result of this quake. At least one aftershock of magnitude 2.6 was recorded, but not felt.
If you were or still are in this area during the quake help others with your feedback and file a quick report here.
Download the Volcanoes & Earthquakes app to get one of the fastest seismic alerts online:
Android | IOS

22.6°C (73 F), humidity: 60%, wind: 9 m/s (17 kts) from E
Primary data source: INETER
Estimated released energy: 6.3 x 1010 joules (17.5 megawatt hours, equivalent to 15.1 tons of TNT) More info
[show map]
Show interactive Map
[smaller] [bigger]
If you felt this quake (or if you were near the epicenter), please share your experience and submit a short "I felt it" report! Other users would love to hear about it!
Also if you did NOT feel the quake although you were in the area, please report it! Your contribution is valuable also to earthquake science and earthquake hazard analysis and mitigation efforts. You can use your device location or the map to indicate where you were during the earthquake. Thank you!

Info: The more agencies report about the same quake and post similar data, the more confidence you can have in the data. It takes normally up to a few hours until earthquake parameters are calculated with near-optimum precision.
Most recent quakes Top 20 quakes past 24 hrs Quakes in Costa Rica