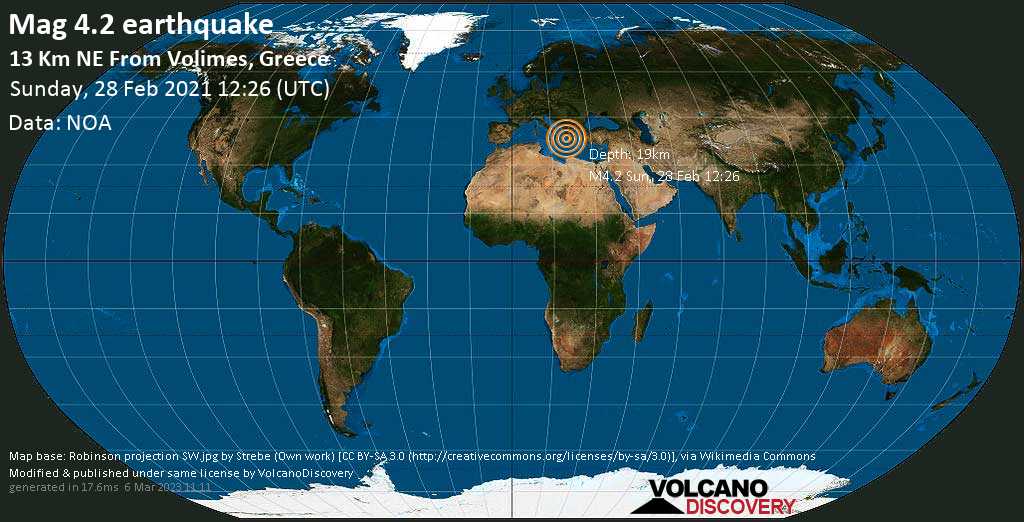 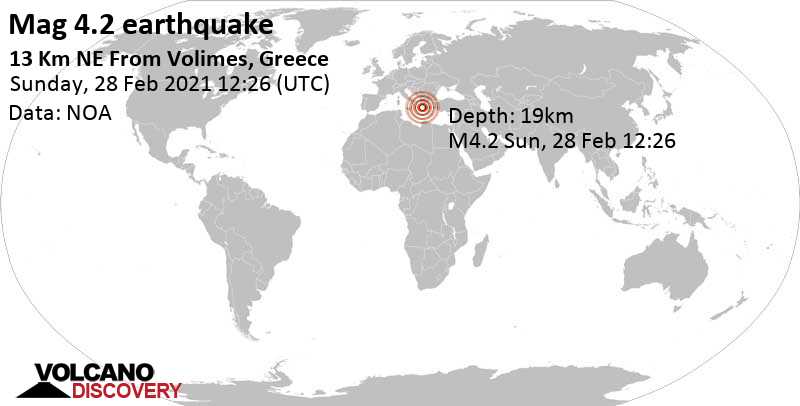 28 Feb 12:29 UTC: First to report: EMSC after 3 minutes.
28 Feb 12:31: Now using data updates from NOA
... [show all] ...28 Feb 12:33: Magnitude recalculated from 4.2 to 4.1.
28 Feb 12:51: Magnitude recalculated from 4.1 to 4.2. Hypocenter depth recalculated from 10.0 to 20.6 km (from 6.2 to 12.8 mi). Epicenter location corrected by 6.6 km (4.1 mi) towards S.
28 Feb 14:21: Hypocenter depth recalculated from 20.6 to 19.0 km (from 12.8 to 11.8 mi).
Update Sun, 28 Feb 2021, 12:33
Moderate tremor of magnitude 4.2 just reported 56 km northwest of Amaliada, Greece
4.2 quake 28 Feb 2:26 pm (GMT +2)
A magnitude 4.2 earthquake near Amaliada, Ilia Prefecture, Western Greece, Greece, was reported only 7 minutes ago by the National Observatory of Athens (NOA), considered the main national agency that monitors seismic activity in Greece. The earthquake occurred at a shallow depth of 10 km beneath the epicenter early afternoon on Sunday 28 February 2021 at 2:26 pm local time. The exact magnitude, epicenter, and depth of the quake might be revised within the next few hours or minutes as seismologists review data and refine their calculations, or as other agencies issue their report.
A second report was later issued by the European-Mediterranean Seismological Centre (EMSC), which listed it as a magnitude 4.5 earthquake. A third agency, the German Research Centre for Geosciences (GFZ), reported the same quake at magnitude 4.5.
Based on the preliminary seismic data, the quake was probably felt by many people in the area of the epicenter. It should not have caused significant damage, other than objects falling from shelves, broken windows, etc.
In Korithi (pop. 48) located 7 km from the epicenter, the quake should have been felt as light shaking.
Weak shaking might have been felt in Katastari (pop. 1,400) located 14 km from the epicenter, Gaitani (pop. 1,900) 22 km away, Zakynthos (pop. 11,500) 24 km away, Argostoli (pop. 9,800) 34 km away, and Lixouri (pop. 3,800) 38 km away.
Other towns or cities near the epicenter where the quake might have been felt as very weak shaking include Gastouni (pop. 8,100) located 45 km from the epicenter, Amaliada (pop. 16,800) 56 km away, and Pýrgos (pop. 22,400) 68 km away.
Download the Volcanoes & Earthquakes app and get one of the fastest seismic alerts online:
Android | iOS

18°C (64 F), humidity: 68%, wind: 3 m/s (5 kts) from NNE
Primary data source: NOA (National Observatory of Athens)
Estimated released energy: 1.3 x 1011 joules (35 megawatt hours, equivalent to 30.1 tons of TNT) | about seismic energy
[show map]
Show interactive Map
[smaller] [bigger]
If you felt this quake (or if you were near the epicenter), please share your experience and submit a short "I felt it" report! Other users would love to hear about it!
If you did NOT feel the quake although you were in the area, please report it! Your contribution is valuable to earthquake science, seismic hazard analysis and mitigation efforts. You can use your device location or the map to indicate where you were during the earthquake. Thank you!

Info: The more agencies report about the same quake and post similar data, the more confidence you can have in the data. It takes normally up to a few hours until earthquake parameters are calculated with near-optimum precision.
Most recent quakes Top 20 past 24 hrs Quakes in Greece