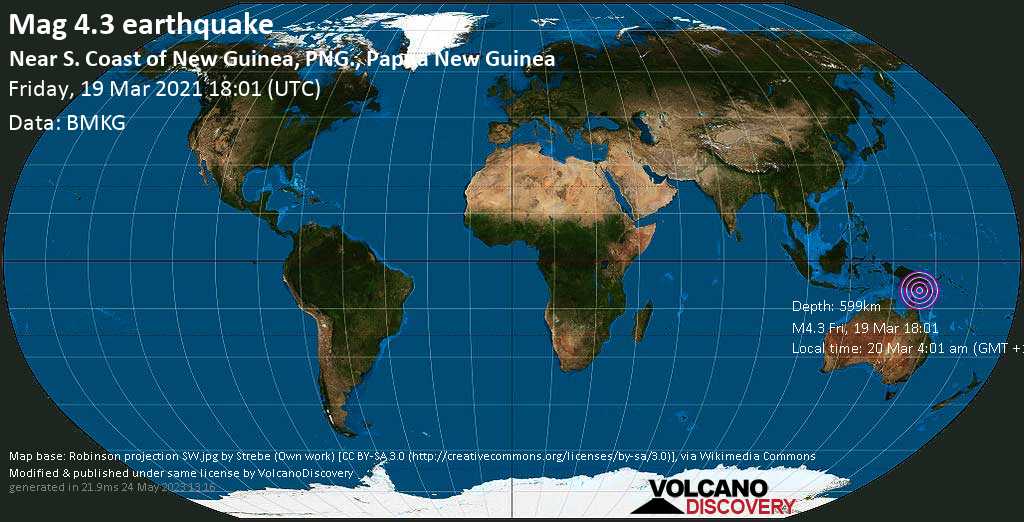 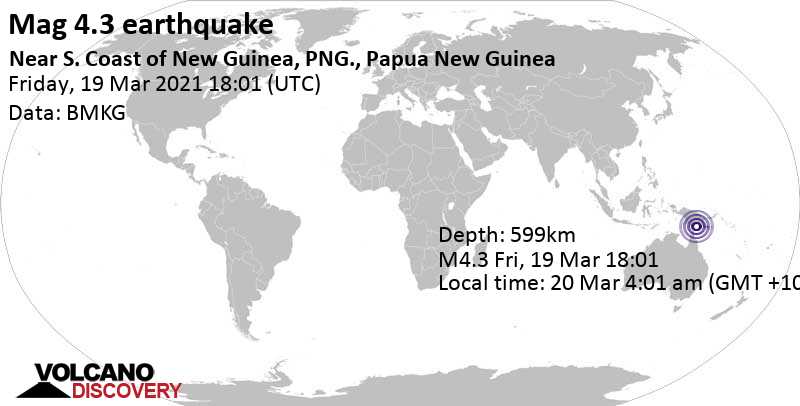 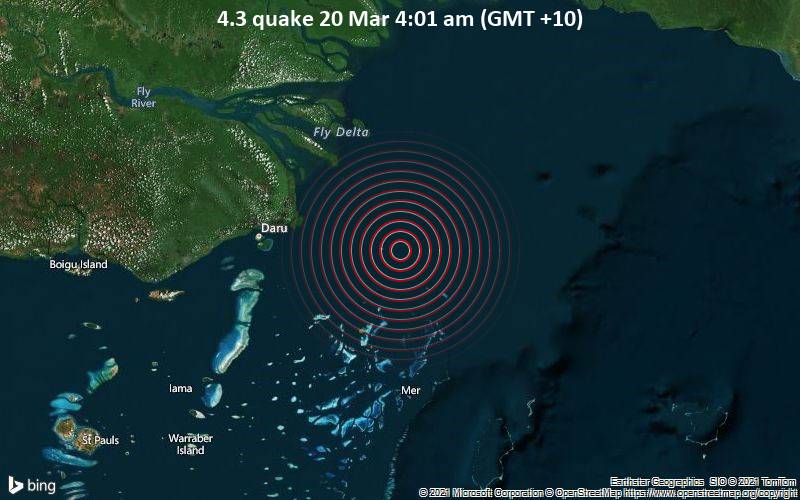 4.3 quake 20 Mar 4:01 am (GMT +10)
A very deep magnitude 4.3 earthquake was reported early morning near Daru, Western Province, Papua New Guinea.
According to Indonesia's Meteorology, Climatology, and Geophysical Agency, the quake hit on Saturday 20 March 2021 at 4:01 am local time at a great depth of 599 km. The strength of the earthquake may have been tempered by its relative great depth below the surface, which makes it feel weaker in absolute terms. The exact magnitude, epicenter, and depth of the quake might be revised within the next few hours or minutes as seismologists review data and refine their calculations, or as other agencies issue their report.
A second report was later issued by the European-Mediterranean Seismological Centre (EMSC), which listed it as a magnitude 4.3 earthquake as well.
According to preliminary calculations, we do not expect that the quake was felt by many people and did not cause any damage. In Daru (pop. 15,200, 85 km away), the quake was probably not felt.
VolcanoDiscovery will automatically update magnitude and depth if these change and follow up if other significant news about the quake become available. If you're in the area, please send us your experience through our reporting mechanism, either online or via our mobile app. This will help us provide more first-hand updates to anyone around the globe who wants to know more about this quake.
Download the Volcanoes & Earthquakes app and get one of the fastest seismic alerts online: Android | iOS
I felt this quake
I didn't feel it

Info: The more agencies report about the same quake and post similar data, the more confidence you can have in the data. It takes normally up to a few hours until earthquake parameters are calculated with near-optimum precision.
Most recent quakes Top 20 past 24 hrs Quakes in Australia

User reports estimate the perceived ground shaking intensity according to the MMI (Modified Mercalli Intensity) scale.
Contribute:
Leave a comment if you find a particular report interesting or want to add to it.
Flag as inappropriate.
Mark as helpful or interesting.
Send your own user report!
Translate
near Lae, Morobe (425.1 km NE of epicenter) [Map] / Light shaking (MMI IV) / vibration and rolling / 20-30 s