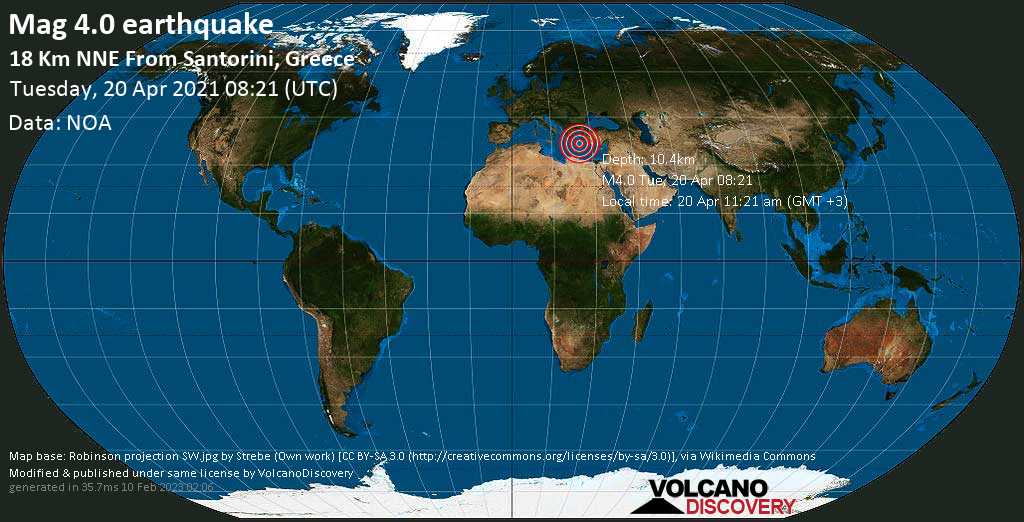 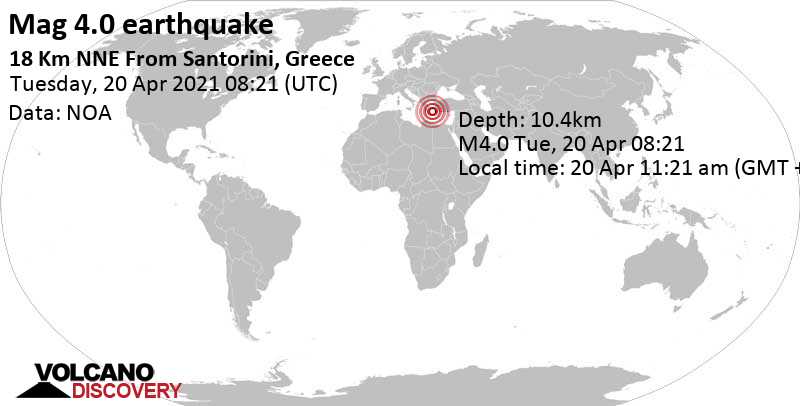 Seismic station on Thirasia recording the earthquake (big blue signal) and many smaller and larger fore-and aftershocks (image: National Observatory of Athens)
This morning, a magnitude 4.0 earthquake occurred 10 km northeast of Santorini Island. The quake hit at 11.21 am local time. It was felt by many people on Santorini, especially in the northern part of the island in the town of Oia, mostly as weak shaking that lasted a few seconds.
The quake was preceded and followed by a series of smaller fore- and aftershocks, with magnitudes of up to 3.4. During the past months, seismic activity in this area had been somewhat higher, but the most interesting aspect is likely that the quakes occurred very close at or directly under an active submarine volcano located 8 km northeast of Santorini island.
Called Kolumbo, it is considered the potentially most dangerous active volcano in Greece. This is first because of its underwater setting, it is capable of triggering tsunamis, and second, because it has the potential to produce large explosive eruptions. It did so during its only known historic eruption in 1650, which devastated Santorini and killed many people and thousands of livestock by toxic gasses. A large tsunami invaded the island's flat coasts, which back then were uninhabited, but now quite crowded with hotels and towns enjoying the location at Santorini's famous black-sand beaches.
So, the question asked is whether the current quakes might be a sign of the volcano becoming more active?
Since it is hidden under the water and only has had one eruption in historic times, Kolumbo is certainly the least known of the active volcanoes in the country, which makes interpreting the potential significance of such events more difficult.
According to a post by Gerasimos Papadopoulos, Research Director of Seismology at National Observatory of Athens, there is currently no sign that the volcano might be becoming restless, and remains in its normal dormant state.
While earthquakes like today's, directly under the volcano, can be caused by volcanic processes that eventually might precede a new eruption, they by no means are necessarily so and most of time are purely tectonic in nature, not affecting the state of the volcano.
In any case, its status merits close monitoring: a volcano getting restless close to popular Santorini island, one of Greece's main tourist attractions, would certainly not be good news, especially now that the country is preparing to open its tourist season in May.
Download the Volcanoes & Earthquakes app and get one of the fastest seismic alerts online:
Android | iOS

Info: The more agencies report about the same quake and post similar data, the more confidence you can have in the data. It takes normally up to a few hours until earthquake parameters are calculated with near-optimum precision.
Most recent quakes Top 20 past 24 hrs Quakes in Greece

Click here to search our database for earlier earthquakes in the same area since 1900!
Most recent quakes Top 20 past 24 hrs Quakes in Greece
Try our free app!