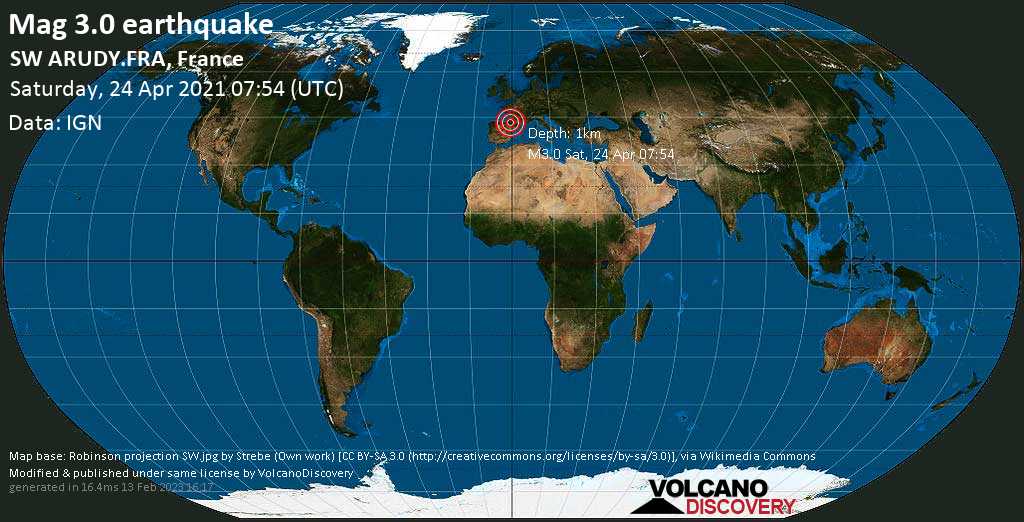 24 Apr 07:57 UTC: First to report: IGN after 3 minutes.
24 Apr 08:17: Hypocenter depth recalculated from 5.0 to 1.0 km (from 3.1 to 0.6 mi). Epicenter location corrected by 3 km (1.9 mi) towards N.
Update Sat, 24 Apr 2021, 08:03
Magnitude 3.0 earthquake strikes near Pau, Pyrénées-Atlantiques, Nouvelle-Aquitaine, France
3.0 quake 24 Apr 9:54 am (GMT +2)
Spain's Instituto Geográfico Nacional (IGN) reported a magnitude 3.0 quake in France near Pau, Pyrénées-Atlantiques, Nouvelle-Aquitaine, only 9 minutes ago. The earthquake hit in the morning on Saturday 24 April 2021 at 9:54 am local time at a very shallow depth of 5 km. The exact magnitude, epicenter, and depth of the quake might be revised within the next few hours or minutes as seismologists review data and refine their calculations, or as other agencies issue their report.
A second report was later issued by the European-Mediterranean Seismological Centre (EMSC), which listed it as a magnitude 2.9 earthquake. A third agency, France's Réseau National de Surveillance Sismique (RéNaSS), reported the same quake at magnitude 2.7.
Based on the preliminary seismic data, the quake should not have caused any significant damage, but was probably felt by many people as light vibration in the area of the epicenter.
Weak shaking might have been felt in Bilhères (pop. 170) located 2 km from the epicenter.
Other towns or cities near the epicenter where the quake might have been felt as very weak shaking include Arudy (pop. 2,400) located 7 km from the epicenter, Laruns (pop. 1,500) 8 km away, and Oloron-Sainte-Marie (pop. 12,600) 20 km away. In Billère (pop. 14,900, 29 km away), Lons (pop. 13,900, 30 km away), Pau (pop. 82,700, 31 km away), and Lourdes (pop. 15,800, 35 km away), the quake was probably not felt.
Download the Volcanoes & Earthquakes app and get one of the fastest seismic alerts online:
Android | iOS