Our monitoring service AllQuakes received reports of shaking caused by a seismic-like event, possibly an earthquake, in or near Near Tulare, California, USA at around 19:36 GMT. Unless confirmed by at least one national or international seismological agency, its status as possible earthquake remains unconfirmed. This may or may not turn out to be an actual naturally occurring quake.
Quake Data | Interactive map | User Reports | Earlier quakes in same area | Quakes in the US | California 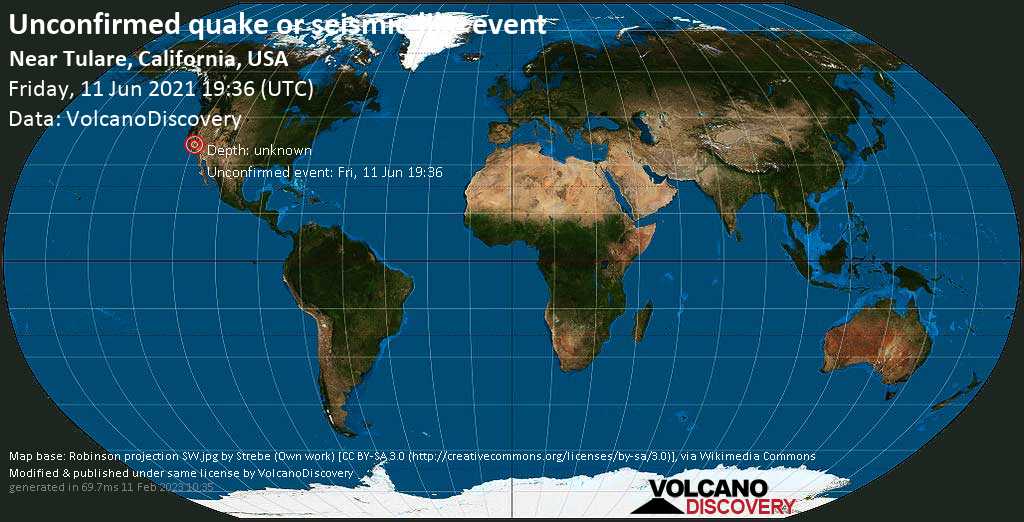 (Tulare, California, United States)
Nearest volcano: Golden Trout Creek (74 km / 46 mi)
Primary data source: VolcanoDiscovery
[show map]
Show interactive Map
[smaller] [bigger]
If you felt this quake (or if you were near the epicenter), please share your experience and submit a short "I felt it" report! Other users would love to hear about it!
Also if you did NOT feel the quake although you were in the area, please report it! Your contribution is valuable also to earthquake science and earthquake hazard analysis and mitigation efforts. You can use your device location or the map to indicate where you were during the earthquake. Thank you!

At magnitude 2.6, this quake might have been felt very close to the epicenter and under calm conditions.
User reports estimate the perceived ground shaking intensity according to the MMI (Modified Mercalli Intensity) scale.
Contribute:
Leave a comment if you find a particular report interesting or want to add to it.
Flag as inappropriate.
Mark as helpful or interesting.
Send your own user report!
93314 / Moderate shaking (MMI V) / complex motion difficult to describe / 2-5 s : Everyone watched glass in house windows bending, houses creaking loud, dogs barking, neighbors confirmed as well | 2 users found this interesting.
Porterville, Tulare, California (3.7 km NNW of epicenter) [Map] / Very weak shaking (MMI II) : I heard the windows shaking but I didn't feel it.
Tipton California 93272 / Weak shaking (MMI III) / rattling, vibrating / 5-10 s : Was using the bathroom and the toilet paper rack which sit on the tile floor began to rattle and shake then the light bulb on the ceiling started to flicker . After it was over the bulb went out. When I went to replace it I realized it was loose not burnt out. I didn’t realize it was a earthquake until my neighbor and talked. She also felt it.
Terra Bella / Very weak shaking (MMI II)
Porterville / Light shaking (MMI IV) / rattling, vibrating / very short : Mostly noise and slight shuttering sound . Wooden house slight creaking noise .
Porterville (2.4 km NNW of epicenter) [Map] / Weak shaking (MMI III) / rattling, vibrating / 2-5 s : My windows shaked
North Las Vegas / Light shaking (MMI IV) / 2-5 s
Porterville california (4.8 km SSE of epicenter) [Map] / Very weak shaking (MMI II) / rattling, vibrating / 1-2 s
Look up aftershocks or earlier quakes
Try our free app!