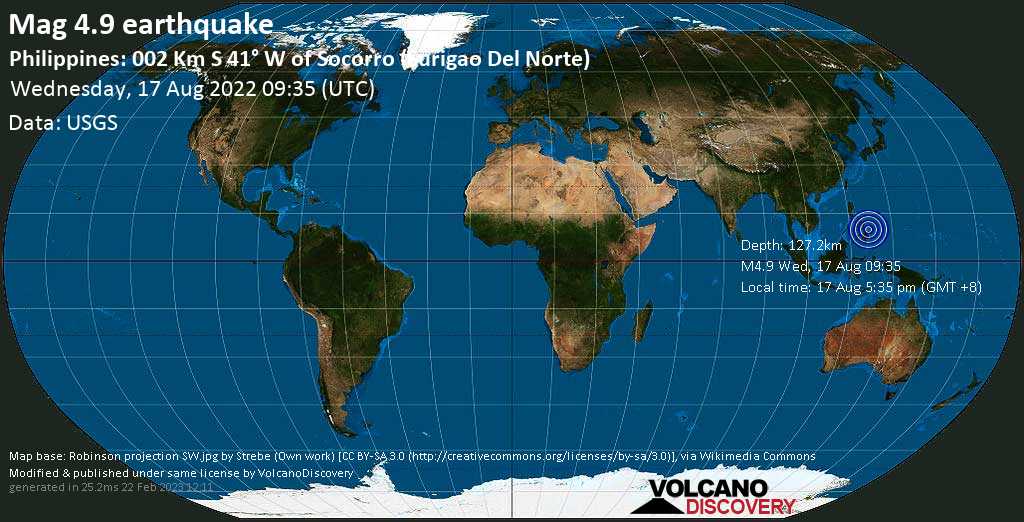 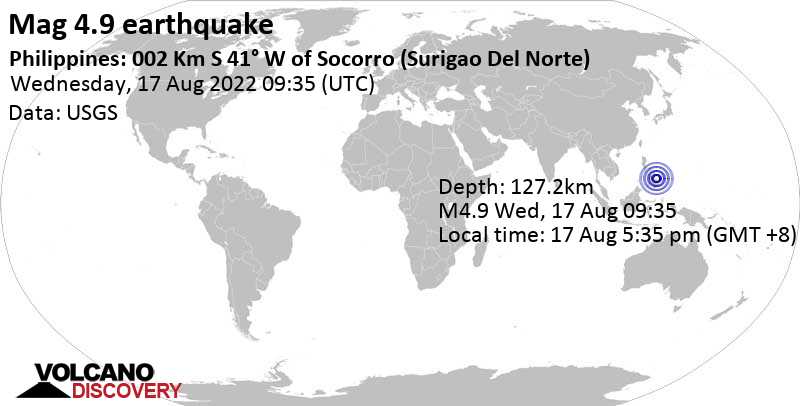 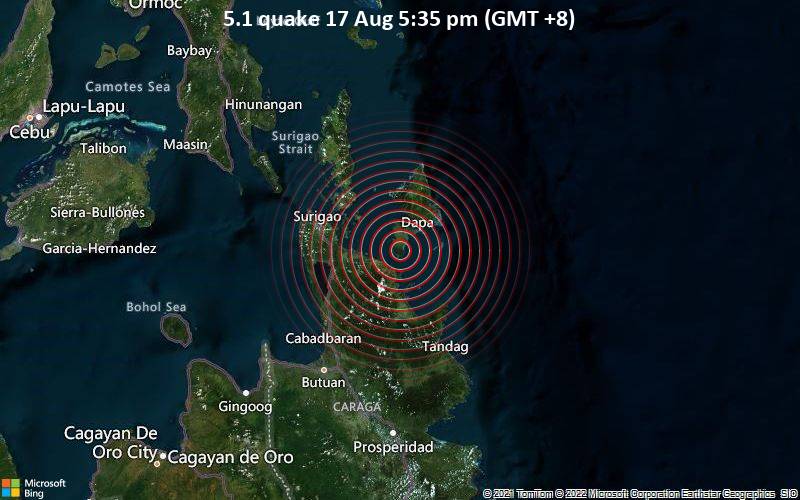 5.1 quake 17 Aug 5:35 pm (GMT +8)
An earthquake of magnitude 5.1 occurred in the afternoon on Wednesday, August 17th, 2022, at 5:35 pm local time near Butuan, Agusan del Norte, Caraga, Philippines, as reported by the Philippine Institute of Volcanology and Seismology (PHIVOLCS).
According to preliminary data, the quake was located at an intermediate depth of 129 km. The strength of the earthquake may have been tempered by its relative great depth below the surface, which makes it feel weaker in absolute terms. The exact magnitude, epicenter, and depth of the quake might be revised within the next few hours or minutes as seismologists review data and refine their calculations, or as other agencies issue their report.
A second report was later issued by France's Réseau National de Surveillance Sismique (RéNaSS), which listed it as a magnitude 5.3 earthquake.
Based on the preliminary seismic data, the quake should not have caused any significant damage, but was probably felt by many people as light vibration in the area of the epicenter.
Weak shaking might have been felt in Socorro (pop. 9,700) located 3 km from the epicenter, and Surigao City (pop. 87,800) 54 km away.
Other towns or cities near the epicenter where the quake might have been felt as very weak shaking include Tandag (pop. 29,000) located 64 km from the epicenter, Cabadbaran (pop. 31,100) 70 km away, Butuan (pop. 309,700) 85 km away, Libertad (pop. 250,400) 88 km away, Buenavista (pop. 18,700) 91 km away, and Bayugan (pop. 40,600) 96 km away.
VolcanoDiscovery will automatically update magnitude and depth if these change and follow up if other significant news about the quake become available. If you're in the area, please send us your experience through our reporting mechanism, either online or via our mobile app. This will help us provide more first-hand updates to anyone around the globe who wants to know more about this quake.
Download the Volcanoes & Earthquakes app and get one of the fastest seismic alerts online: Android | iOS
I felt this quake
I didn't feel it

User reports estimate the perceived ground shaking intensity according to the MMI (Modified Mercalli Intensity) scale.
Contribute:
Leave a comment if you find a particular report interesting or want to add to it.
Flag as inappropriate.
Mark as helpful or interesting.
Send your own user report!
Translate
Butuan City (87.4 km SSW of epicenter) [Map] / Very weak shaking (MMI II) / horizontal (sideways) swinging / 10-15 s : I was in a car during a stop light, the shaking is a bit magnified. I noticed the wires above didn't swing as much. (reported through our app)
Butuan City (87.3 km SSW of epicenter) [Map] / Light shaking (MMI IV) : Chandelier swinging