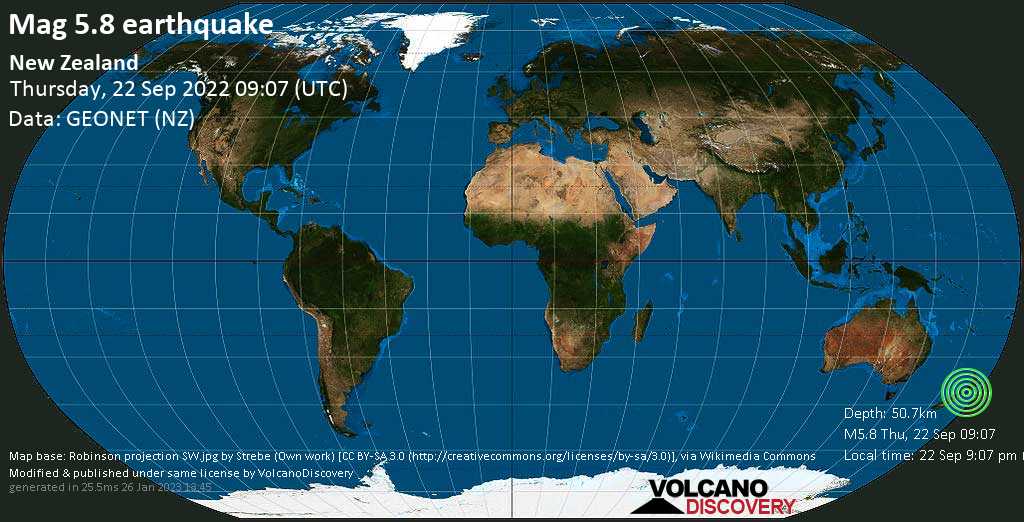 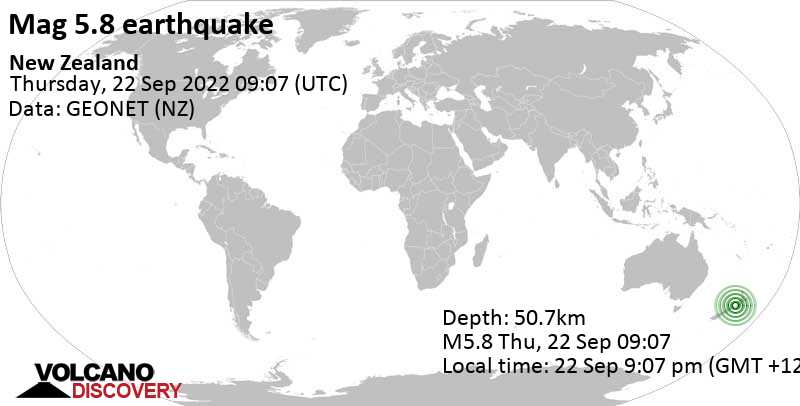 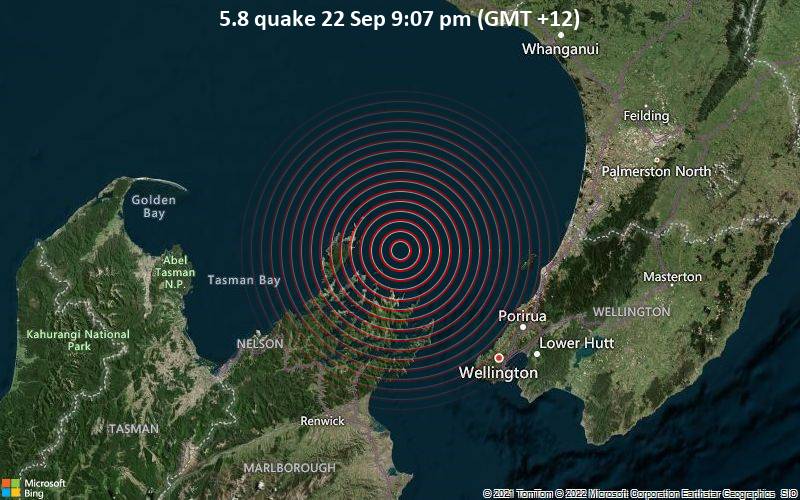 5.8 quake 22 Sep 9:07 pm (GMT +12)
New Zealand was shaken near Wellington, Wellington City, by an earthquake of magnitude 5.8 only 8 minutes ago, New Zealand's Earthquake Commission and Geological Survey (GeoNet) reported.
The quake hit at a moderately shallow depth of 50.7 km beneath the epicenter near Wellington, Wellington City, New Zealand, in the evening on Thursday, September 22nd, 2022, at 9:07 pm local time. The exact magnitude, epicenter, and depth of the quake might be revised within the next few hours or minutes as seismologists review data and refine their calculations, or as other agencies issue their report.
Our monitoring service identified a second report from the European-Mediterranean Seismological Centre (EMSC) which listed the quake at magnitude 5.6.
Based on the preliminary seismic data, the quake was probably felt by many people in the area of the epicenter. It should not have caused significant damage, other than objects falling from shelves, broken windows, etc.
In Picton (pop. 4,800) located 56 km from the epicenter, Porirua (pop. 50,900) 65 km away, Paraparaumu (pop. 30,600) 69 km away, Wellington (pop. 381,900) 72 km away, Lower Hutt (pop. 101,200) 75 km away, Upper Hutt (pop. 38,400) 80 km away, Wainuiomata (pop. 19,400) 81 km away, Blenheim (pop. 26,600) 82 km away, Levin (pop. 19,800) 92 km away, and Nelson (pop. 59,200) 93 km away, the quake should have been felt as light shaking.
VolcanoDiscovery will automatically update magnitude and depth if these change and follow up if other significant news about the quake become available. If you're in the area, please send us your experience through our reporting mechanism, either online or via our mobile app. This will help us provide more first-hand updates to anyone around the globe who wants to know more about this quake.
If you were or still are in this area during the quake help others with your feedback and report it here.
Download the Volcanoes & Earthquakes app and get one of the fastest seismic alerts online: Android | iOS
I felt this quake
I didn't feel it

Info: The more agencies report about the same quake and post similar data, the more confidence you can have in the data. It takes normally up to a few hours until earthquake parameters are calculated with near-optimum precision.
Most recent quakes Top 20 past 24 hrs Quakes in New Zealand

[More info]
Based on its magnitude, the fault that was active during the quake ruptured along a surface of approx. 63 km2 (=24 sqare miles) as a first-order estimate. The length of the rupture zone thus was probably around 14 km (9 mi).
Aftershocks typically occur during the days and weeks following the quake at or near the same fault, at distances of up to approx. two times the length of the rupture zone.
The often broadly linear arrangement of aftershock epicenters encompasses the rupture zone of the main shock (check on the map below to verify).

Click here to search our database for earlier earthquakes in the same area since 1900!
Most recent quakes Top 20 past 24 hrs Quakes in New Zealand
Try our free app!