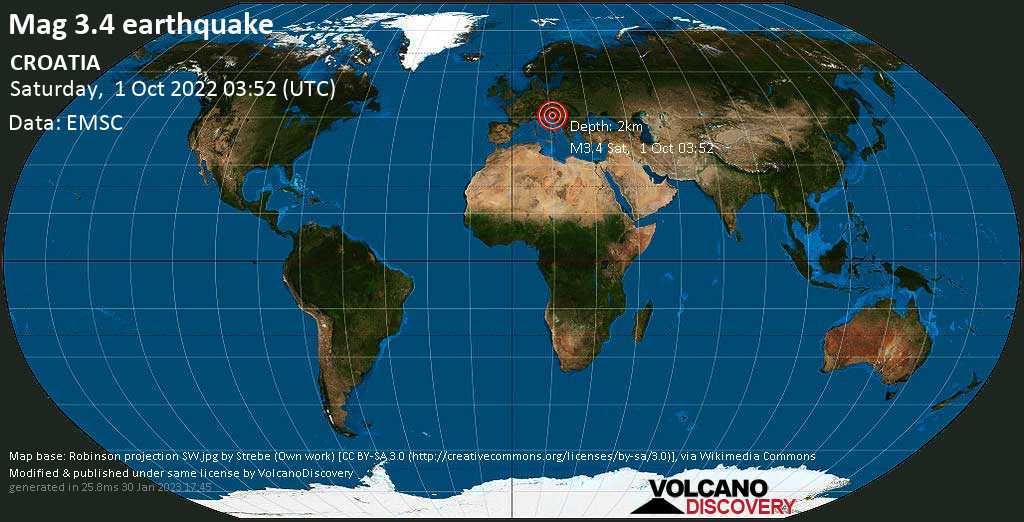 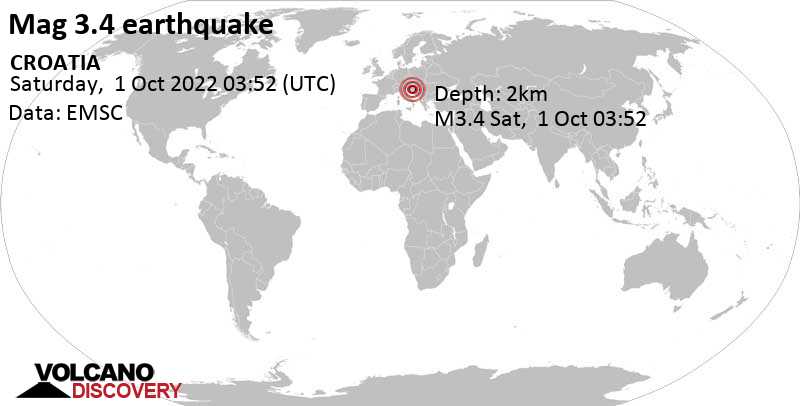 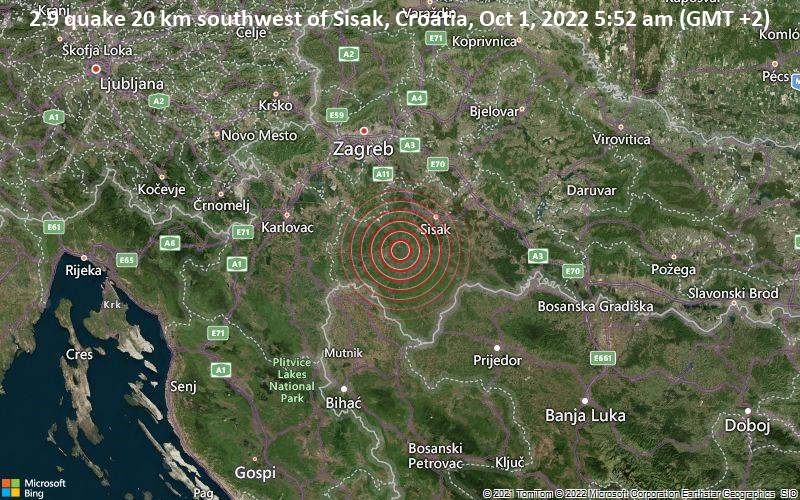 2.9 quake 20 km southwest of Sisak, Croatia, Oct 1, 2022 5:52 am (GMT +2)
A magnitude 2.9 earthquake near Sisak, Sisak-Moslavina, Croatia, was reported only 17 minutes ago by the European-Mediterranean Seismological Centre (EMSC), considered one of the key international agencies that monitor seismic activity worldwide. The earthquake occurred at a very shallow depth of 2 km beneath the epicenter early morning on Saturday, October 1st, 2022, at 5:52 am local time. The exact magnitude, epicenter, and depth of the quake might be revised within the next few hours or minutes as seismologists review data and refine their calculations, or as other agencies issue their report.
A second report was later issued by Hungary's Seismological Observatory (Hungarian National Seismological Network), which listed it as a magnitude 3.8 earthquake. Other agencies reporting the same quake include the citizen-seismograph network of RaspberryShake at magnitude 3.7, and the German Research Centre for Geosciences (GFZ) at magnitude 3.7.
Based on the preliminary seismic data, the quake should not have caused any significant damage, but was probably felt by many people as light vibration in the area of the epicenter.
Weak shaking might have been felt in Brnjeuška (pop. 13) located 1 km from the epicenter, and Glina (pop. 4,700) 7 km away.
Other towns or cities near the epicenter where the quake might have been felt as very weak shaking include Petrinja (pop. 15,700) located 13 km from the epicenter, Mošćenica (pop. 2,500) 17 km away, Sisak (pop. 35,700) 20 km away, Gvozd (pop. 1,100) 24 km away, and Budaševo (pop. 1,700) 24 km away. In Vrnograč (pop. 6,900, 28 km away), Podzvizd (pop. 6,700, 31 km away), and Zagreb (pop. 699,000, 53 km away), the quake was probably not felt.
Download the Volcanoes & Earthquakes app and get one of the fastest seismic alerts online: Android | iOS
I felt this quake
I didn't feel it

Info: The more agencies report about the same quake and post similar data, the more confidence you can have in the data. It takes normally up to a few hours until earthquake parameters are calculated with near-optimum precision.
Most recent quakes Top 20 past 24 hrs Quakes in Bosnia and Herzegovina

Click here to search our database for earlier earthquakes in the same area since 1900!
Most recent quakes Top 20 past 24 hrs Quakes in Bosnia and Herzegovina
Try our free app!