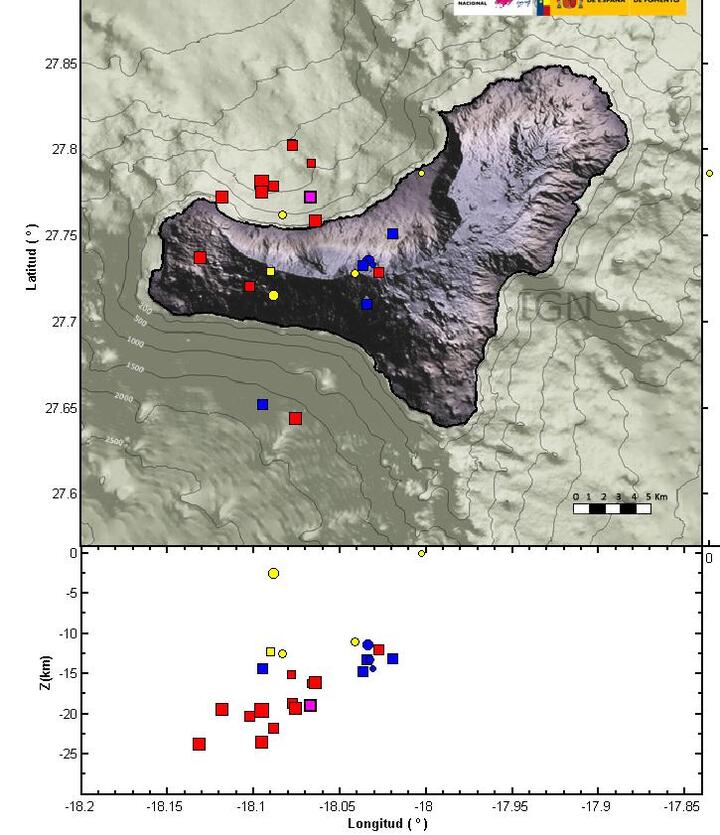 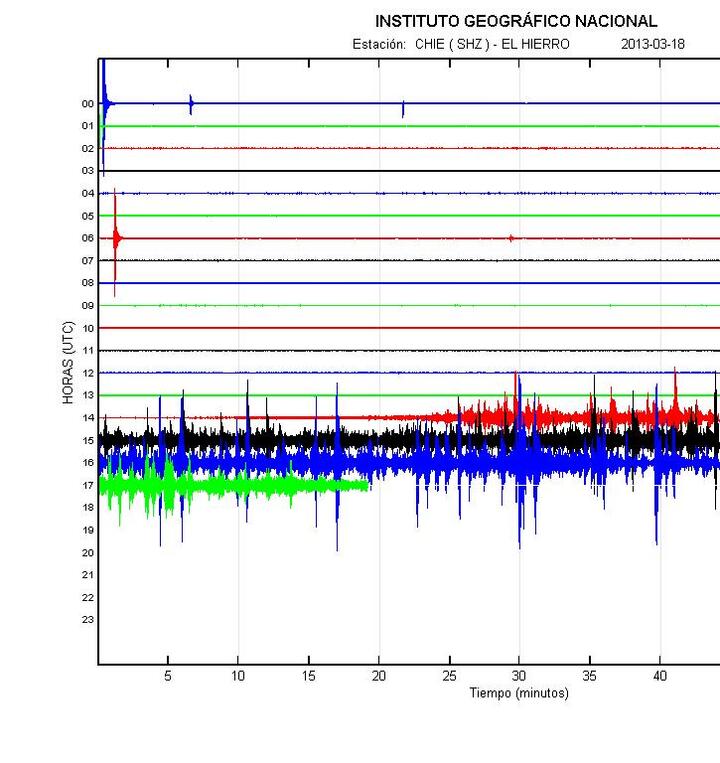 Seismic signal from El Hierro (IGN)
A powerful new earthquake swarm accompanied by volcanic tremor has started under the western part of the island. So far, the quakes are mostly at about 20 km depth. A plausible cause is that another magma intrusion from the mantle into the crust under the island has just started.
Update Sun 10 Feb 12:51

Depth vs time of recent quakes under El Hierro
The number of earthquakes continues to be a bit above background with 1-6 small daily events.

Update Fri 08 Feb 09:25
Some new data suggest that a second submarine eruption might actually have occurred at El Hierro occurred at the sea floor SW off El Hierro Island during the strong seismic crises in end of June - July 2012.
Evidence of this claimed eruption were sonar images which, according to the researchers, showed volcanic material erupted in an area less than 2 NM from the coast and at depths of 64 to 88 meters. The material formed a plume that rose up to a depth of 48 meters. However, some doubts about this evidence remain because while the earthquake swarm was very intense, there were no shallow earthquakes associated with the possible opening of a new eruptive vent. Read all.
Read more about the June-July 2012 seismic activity.

Time and depth of recent earthquakes at El Hierro 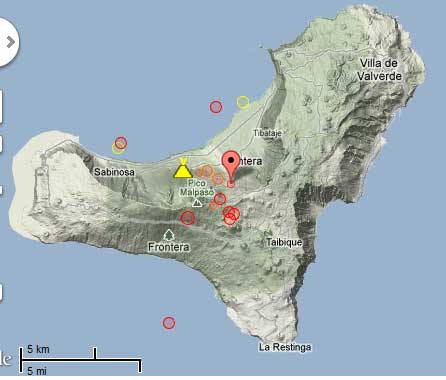 Map of recent earthquakes at El Hierro
Small earthquakes have started to occur again in increased numbers. Following a period of calm with many days without any quakes, about 9 small quakes in the range of magnitude 1-2 have been recorded over the past 48 hours. Most of them were located at depths of 10-15 km depth under the central part of the island.
Update Fri 04 Jan 10:30
It seems that the swarm has already ended. 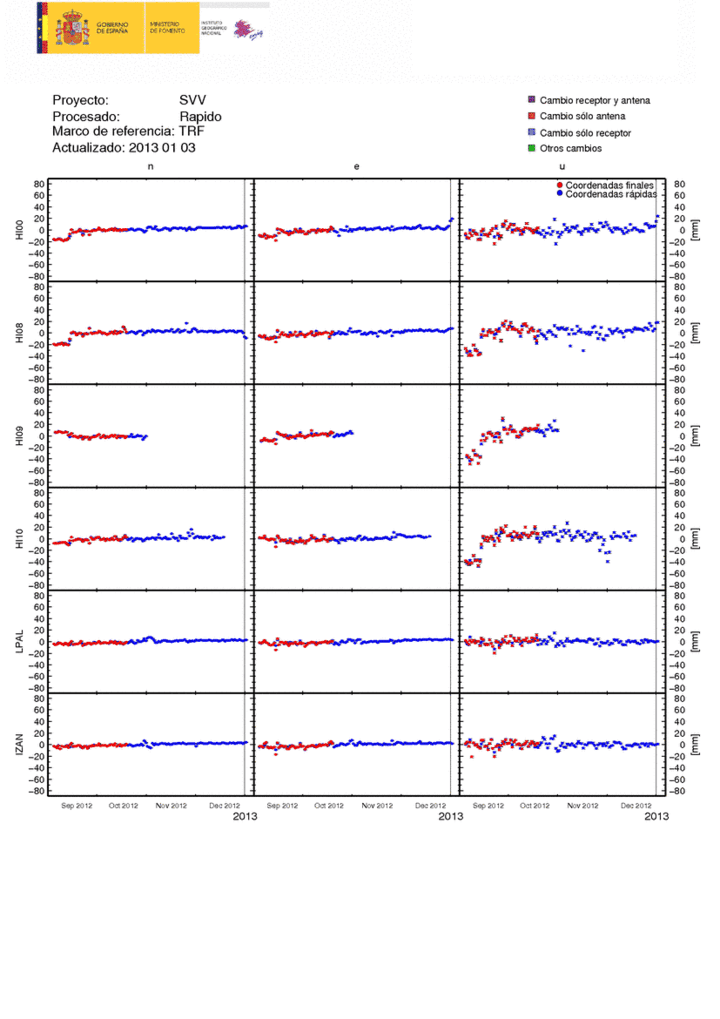 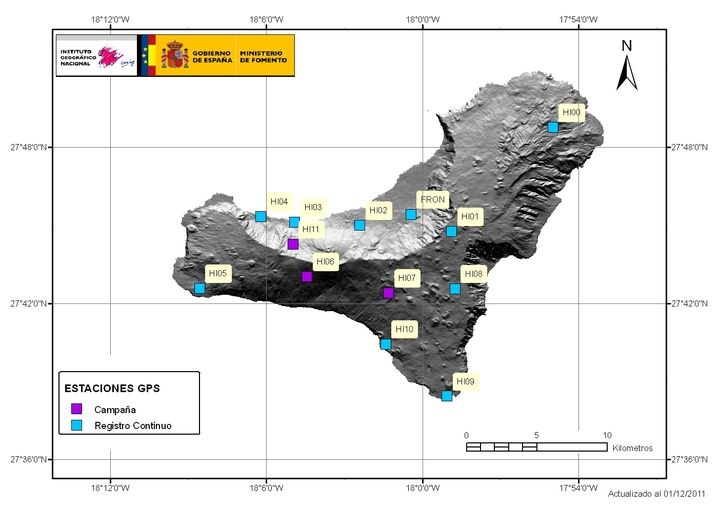 Location of GPS stations (IGN)
Earthquakes continue under in the eastern El Golfo area. GPS station HI00 in the NE part of the island shows a clear inflation, which suggests that some magma intrusion has been taking place. The tremor signal recorded by IGN is low. 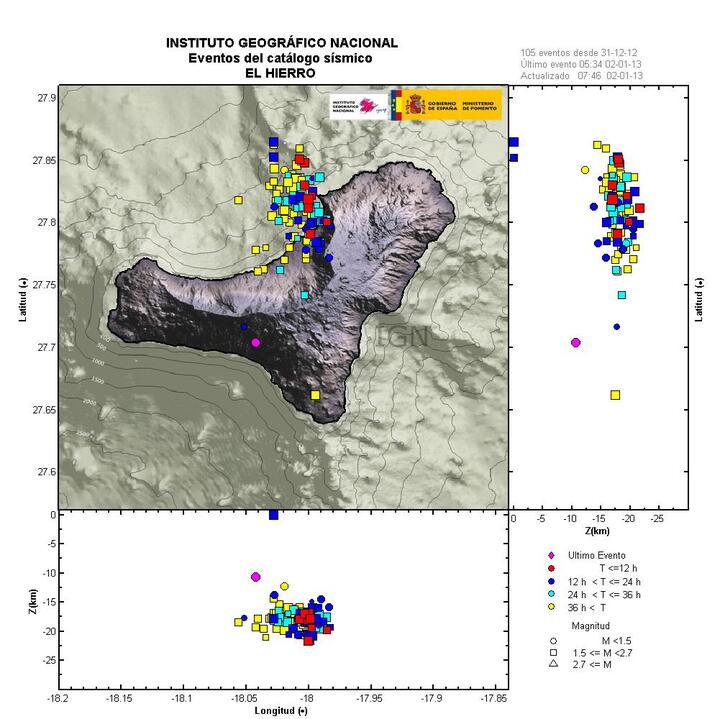 Volcano-Photo.com
Fine art prints, gifts and other photo products from a selection of our volcano photos. Check out the new website volcano-photo.com!
Fuego

Current activity of Bardarbunga volcano, Iceland
An intense seismic crisis started at Bárdarbunga volcano on 16 August 2014 and is continuing at the time of writing (23 Aug). It may or may not lead to a volcanic eruption, possibly under the Vatnajökull ice cap.
Follow updates as news come in!
VAAC