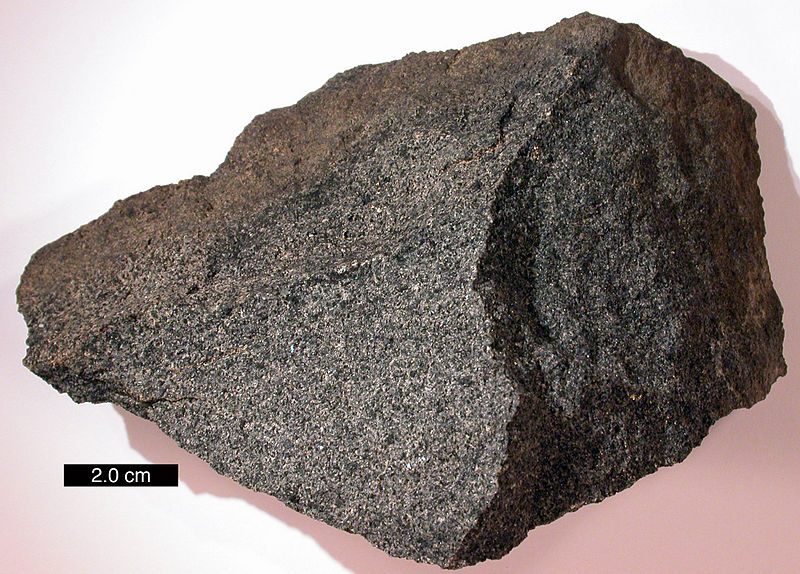 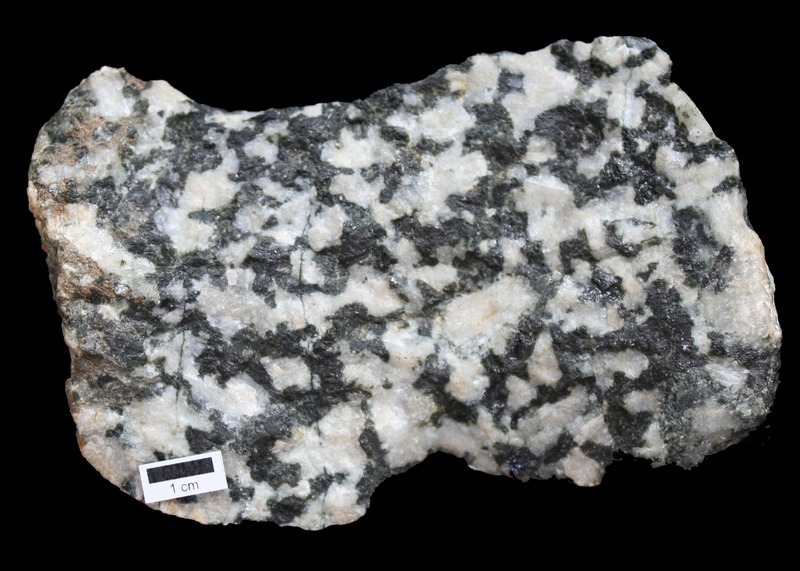 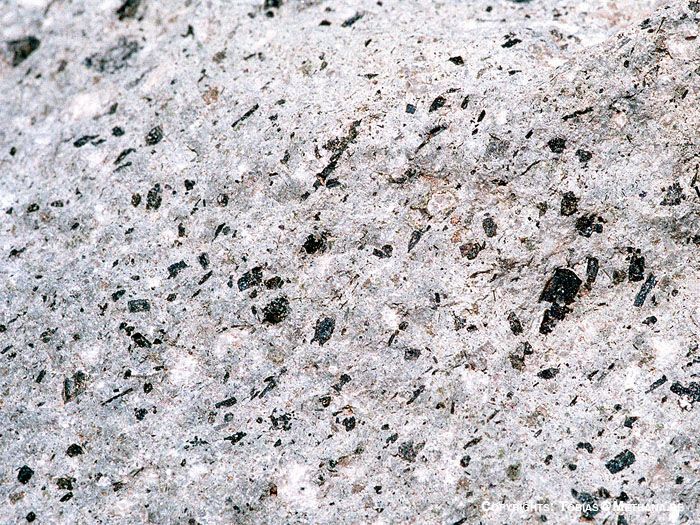 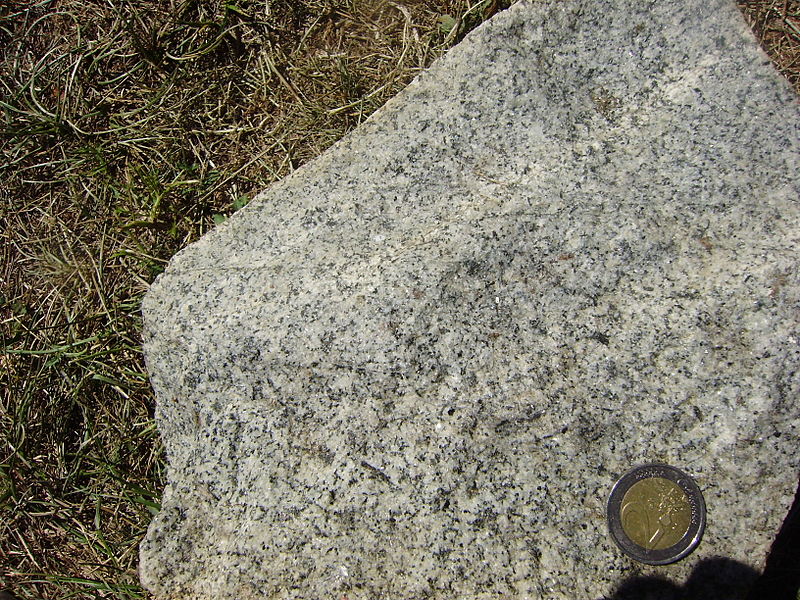 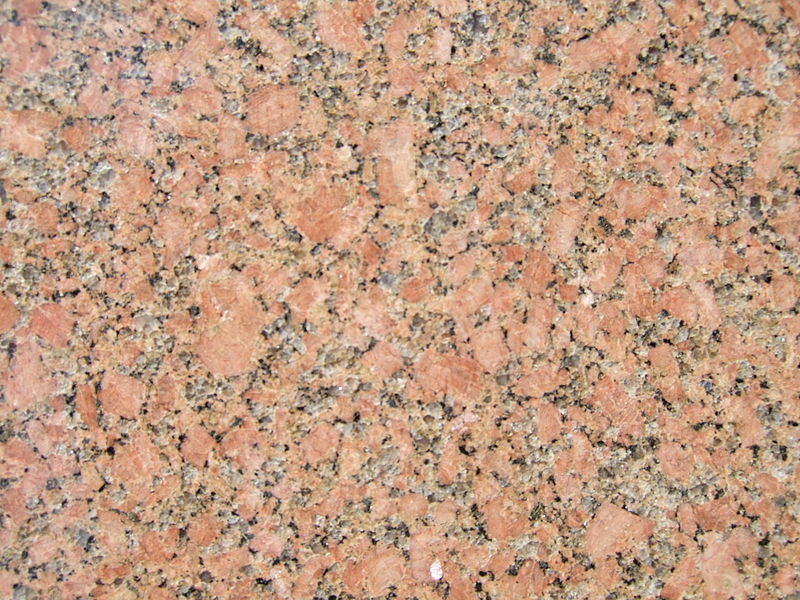 Granite (image: Friman / Wikimedia Commons)
Granite, the equivalent of its extrusive (volcanic) rock type rhyolite, is a very common type of intrusive igneous rock. It contains more than 68% weight % of silica in composition and is granular and coarse-grained in texture. Its principal minerals are feldspars, quartz, and mica.
Granites can be predominantly white, pink, or gray in color, depending on their mineralogy. 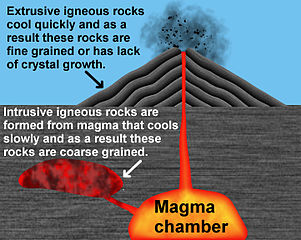 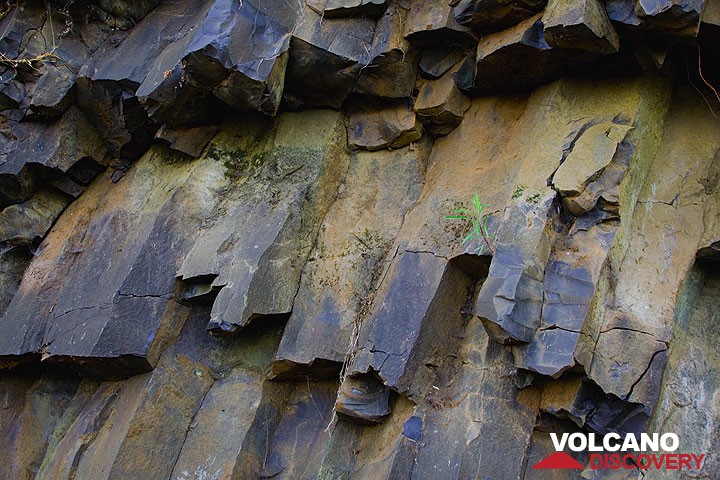 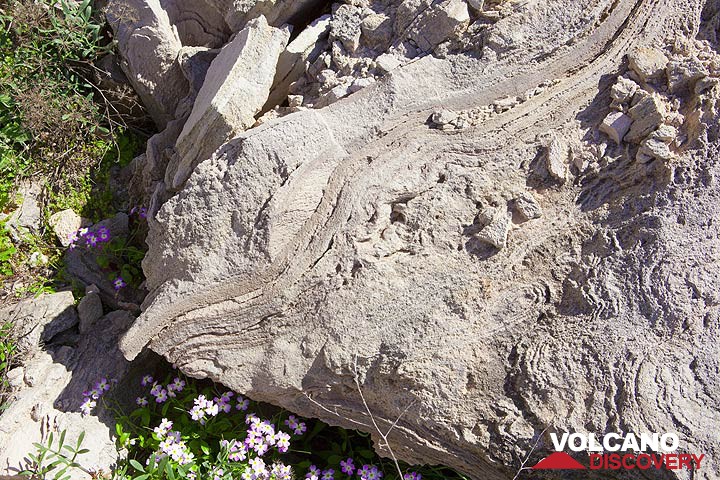 Rhyolite from Milos island, Greece, erupted approx. 84,000 years ago. Rhyolite is the extrusive equivalent to the plutonic rock type granite - both form from the same magma. Rhyolite lava flows are very viscous. Due to their high viscosity, they only move through laminar flow along sheer planes that form where gas bubbles concentrate. These flow structures are usually visible in the cooled rock. They are also at the Greek origin of the name of the rock, stemming from rheo ("flowing") and lithos ("rock").
Try our free app!

Small spherical balls of volcanic ash that form from a wet nucleus falling through a volcanic ash cloud.
Dallol

Dallol hot springs
One of the most bizarre landscapes on earth: Dallol is a vast and very active hydrothermal field creating a colorful array of hot springs, small geysers, salt towers, colorful lakes and ponds in the middle of the deepest part of the Danakil desert and the Karum salt lake.
Raung

Raung volcano photos
One of the largest and most active volcanoes in East Java, rarely-visited and relatively unknown Raung became (in)famous during its recent eruption in 2015 when its frequent ash plumes forced the repeated closure of Bali's airport.
Bardarbunga update

Current activity of Bardarbunga volcano, Iceland
An intense seismic crisis started at Bárdarbunga volcano on 16 August 2014 and is continuing at the time of writing (23 Aug). It may or may not lead to a volcanic eruption, possibly under the Vatnajökull ice cap.
Follow updates as news come in!
Hawai'i

Volcano Tours on Hawai'i
The Hawaiian Islands are not only home to the most active volcanoes in the world, Kilauea and Mauna Loa on the Big Island, but also boast a unique natural environment. Born by volcanic activity of a very active hot spot in the middle of the Pacific Plate, they are a showcase of natural history.
Why is there advertising on this site?
Sources: VolcanoDiscovery / VolcanoAdventures and other sources as noted.
Use of material: Most text and images on our websites are owned by us. Re-use is generally not permitted without authorization. Contact us for licensing rights.
Volcanoes & Earthquakes