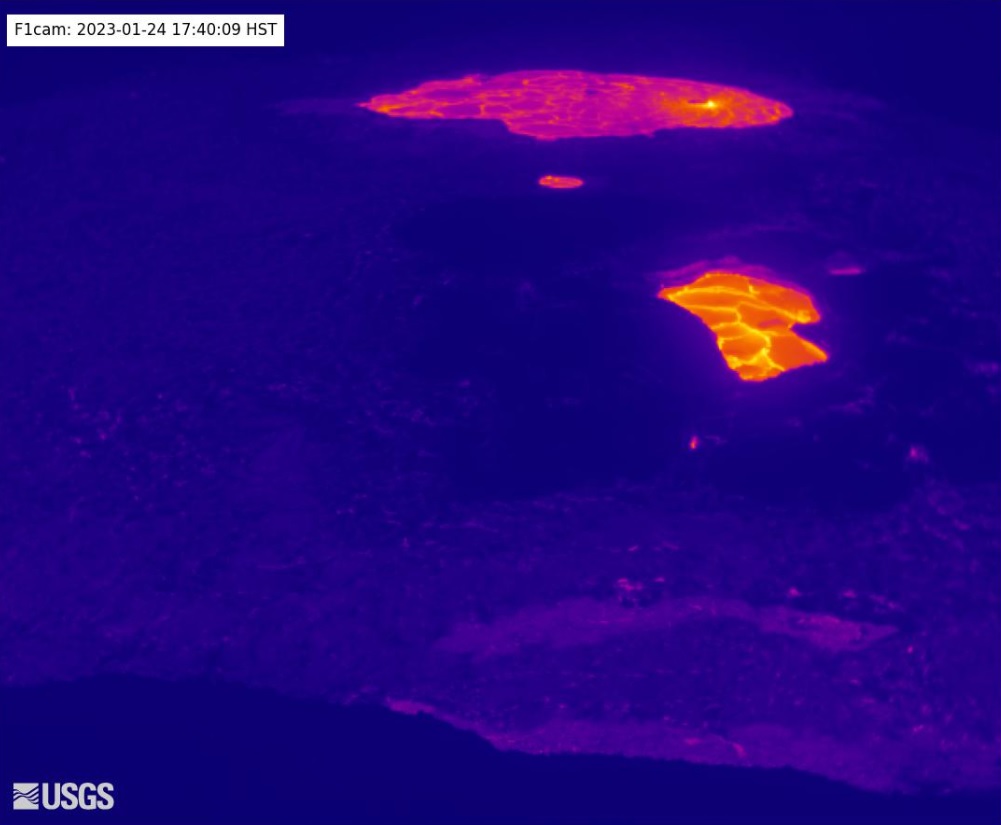 Thermal F1 image of both active lava lakes within Halemaʻumaʻu crater with small lava pit in between them (image: F1 HVO)

A true colour satellite image of Kilauea volcano with IR highlights composite depicting both active lava lakes (image: Sentinel-2)
The effusive eruption at the volcano continues.
Both lava lakes, the large one in the eastern half of the crater and 2021-2022 western, smaller one, continue to be active within the Halemaʻumaʻu crater.
The eastern lava lake is currently well-defined by its levee boundaries, though there are periods of frequent overflows.
The flux of SO2 emissions reached to a 3,000 tonnes on 20 January.
A live-stream video of the activity is available here.
Source: Hawaiian Volcano Observatory volcano activity update 25 January 2023 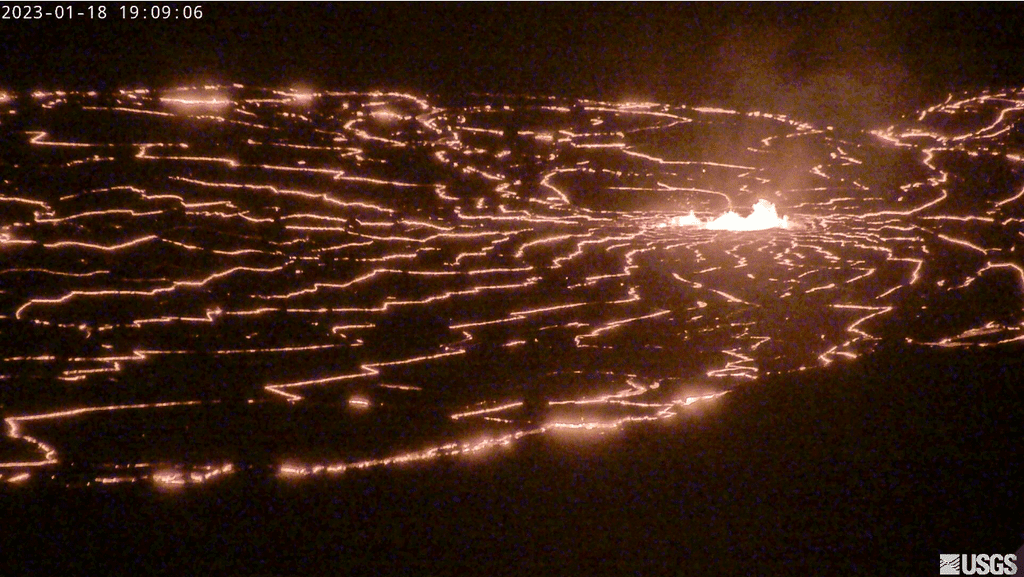 View of the west vent in Halemaʻumaʻu and the lava lake (image: HVO)
The effusive eruption within the Halemaʻumaʻu crater continues.
The main activity is confined to the 2023 large lava lake, located in the eastern half of the crater, as well as to the 2021-2022 smaller, western lava lake.
The fissure vent continues to erupt one prevailing lava fountain, about 6-7 meters tall, feeding lava into the eastern lava lake. The current lava lake area refers to approx. 30 acres measured on 10 January.
Summit tiltmeters monitored an inflation pattern early yesterday, consistent with the inflation phase of a summit deflation-inflation event.
The volcanic tremor has not shown significant variations.
Sulfur dioxide (SO2) emissions reached to a 3,500 tonnes on 9 January.
Source: Hawaiian Volcano Observatory volcano activity update 19 January 2023 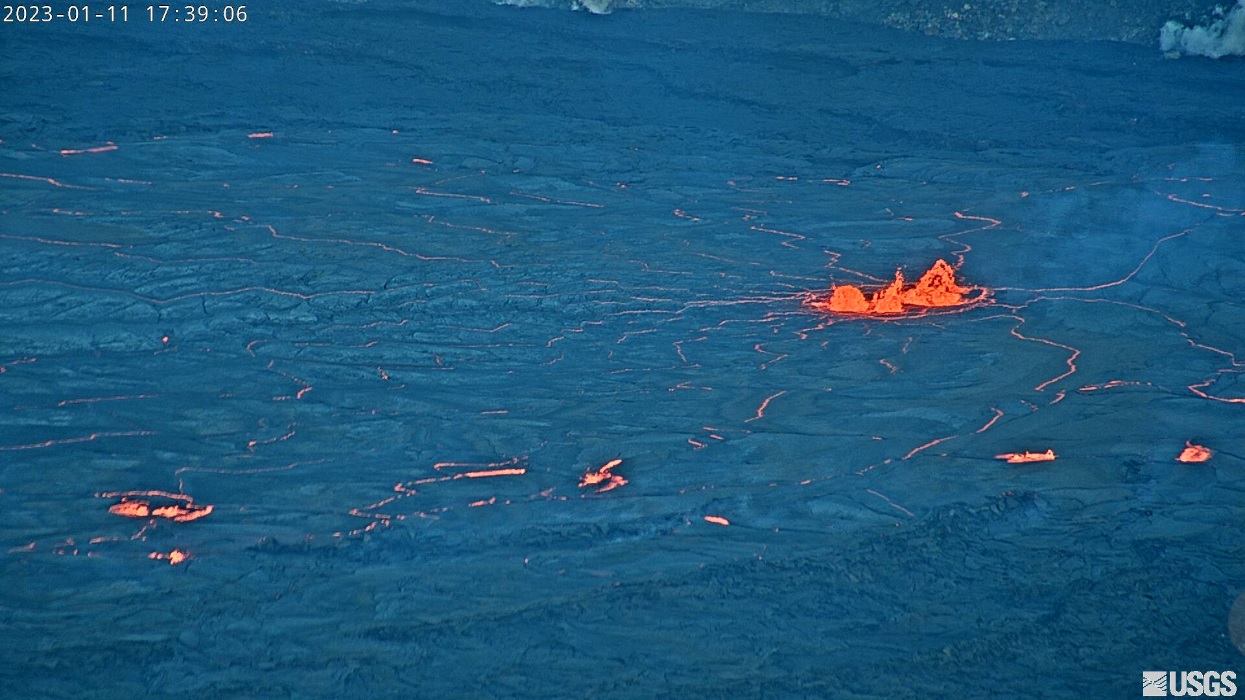 Spattering activity at the fissure vent within Halemaʻumaʻu crater (image: HVO)
The effusive eruption from the eruptive vents in the eastern half of the Halemaʻumaʻu crater continues.
Judging from the here, several small lava fountains have reduced themselves into one dominant lava bursting. The summit of the volcano has been inflated until about midday yesterday, but later on, it reverted to a deflation mode again. SO2 emissions reached to a 3,500 tonnes on 9 January. <i>Source: Hawaiian Volcano Observatory volcano activity update 12 January 2023</i> 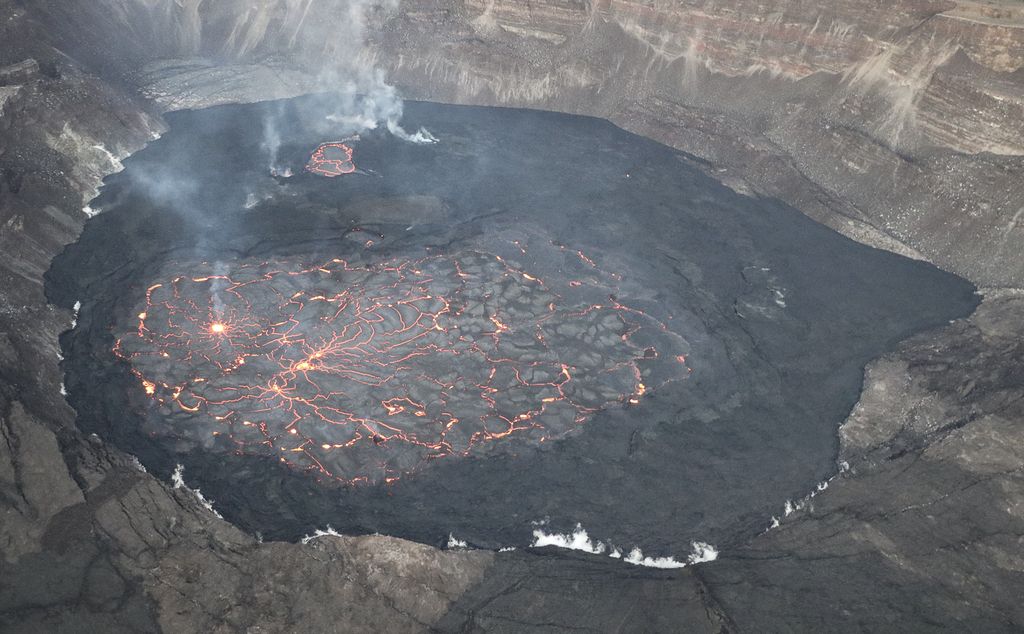 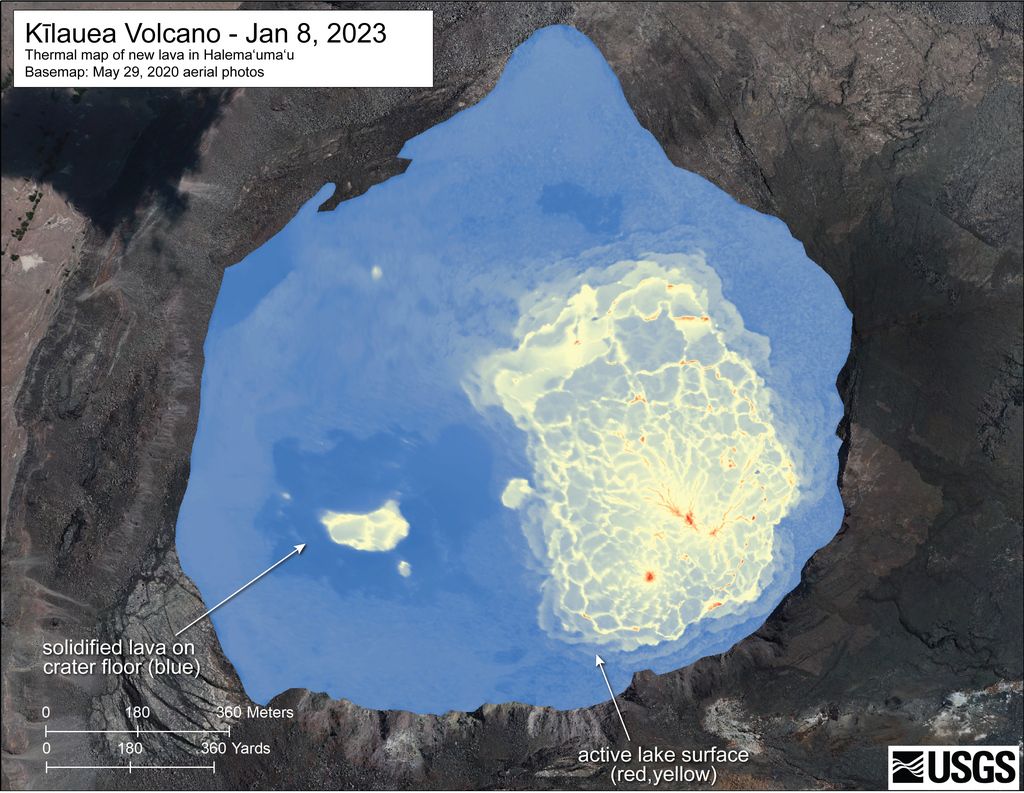 Thermal map of the new lava lake (right) with small solidified lava on the crater floor (left) (image: HVO)
The effusive eruption within Halemaʻumaʻu crater has slightly slowed down over the past 24 hours.
Small, sustained lava fountains continue to feed the lava spreading into the newly formed lava lake, currently concentrated in the eastern half of the crater.
The flux of SO2 emissions reached to a 4,000 tonnes on 8 January.
A live-stream video of the activity is available here.
Source: Hawaiian Volcano Observatory volcano activity update 10 January 2023

A timelapse video of the resumption of the activity between 5 and 9 January (source: Dane duPont)

Timelapse of #Kilauea Eruption Resumption (1.5-1.9.23)Lava rapidly covers the footprint of the previous lava lake in the first hours of the eruption and then lava in the foreground begins to solidify and shrink the size of the active lava lake. #hawaii pic.twitter.com/iu2HwMJxJ1 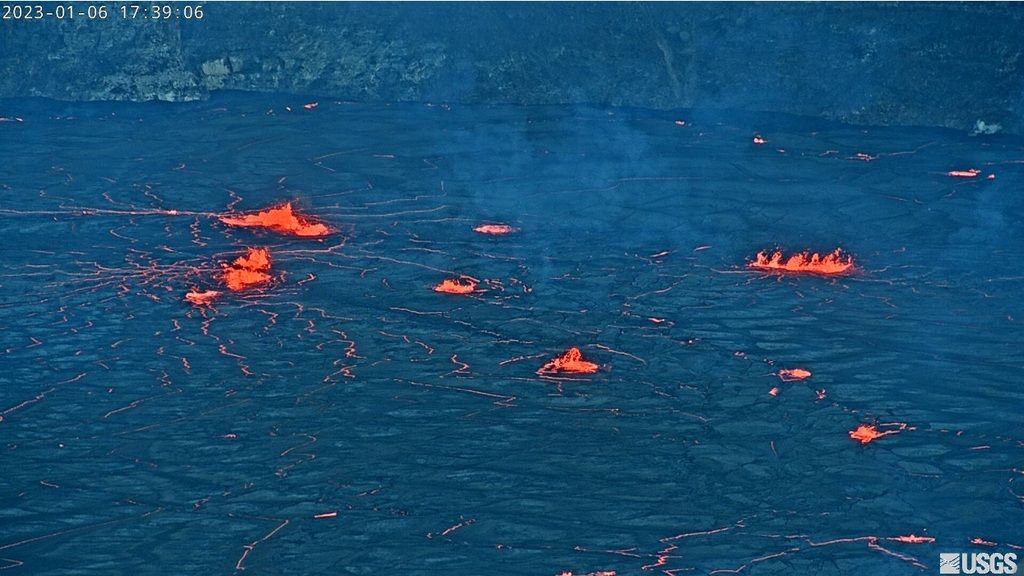 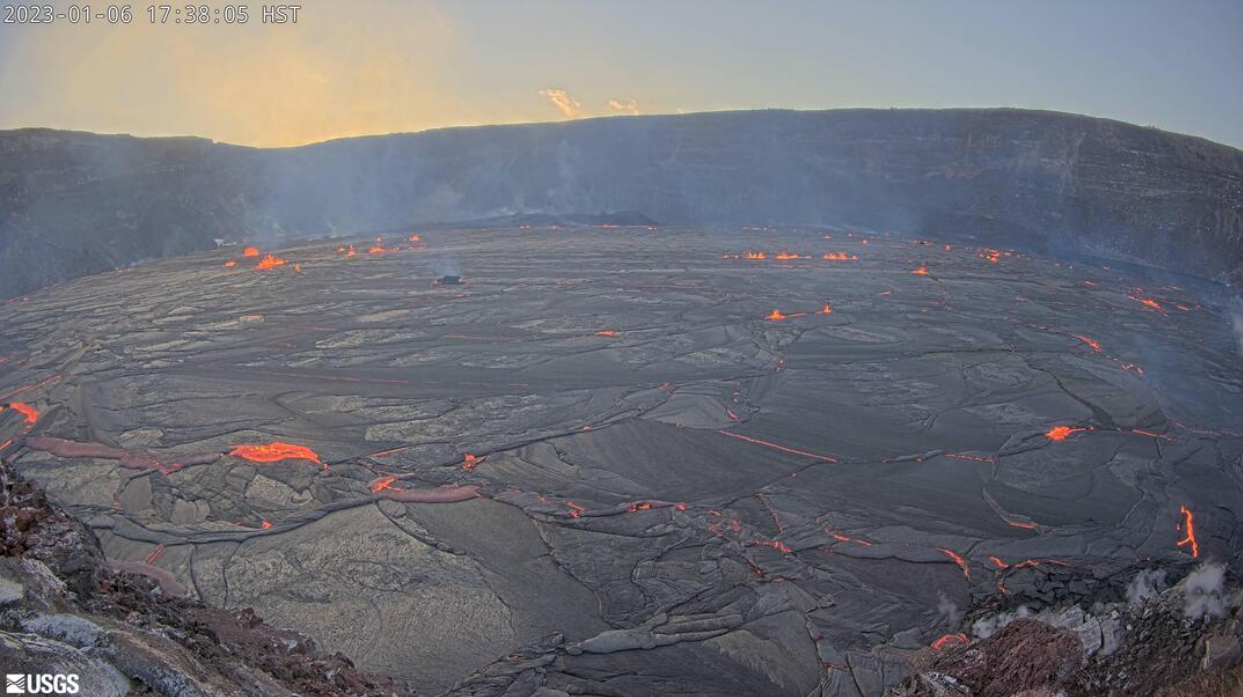 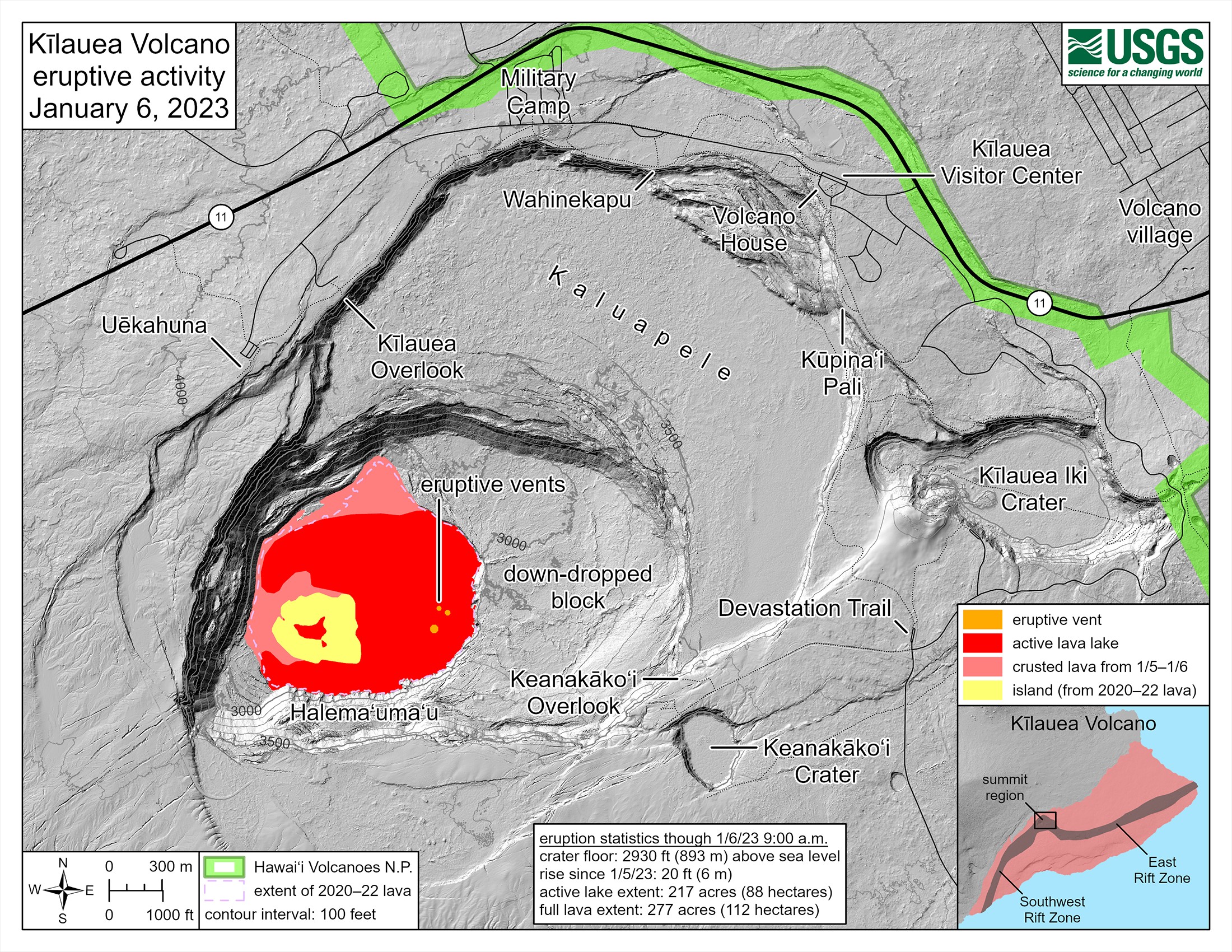 New map for the renewed lava lake eruption of Halema‘uma‘u at Kīlauea's summit (image: HVO)
The effusive activity is confined within the Halema'uma'u crater.
The vast area of the crater floor is being covered by lava flow field with slabs of dark, solidified crust that have continued to shift on the lava field surface, accompanied by typical bright orange lava glow where several weak lava spattering is seen between them.
The HVO observatory doesn't expect the eruption to migrate elsewhere out of the summit area.
The alert status is being lowered from "Warning" to "Watch" as the effusion rate has been declining over the past hours and the Aviation Color Code from "Red" to "Orange" because there is currently no threat of significant volcanic ash emission into the atmosphere outside of the hazardous closed area within Hawai'i Volcanoes National Park.
Source: Hawaiian Volcano Observatory volcano activity update 7 January 2023 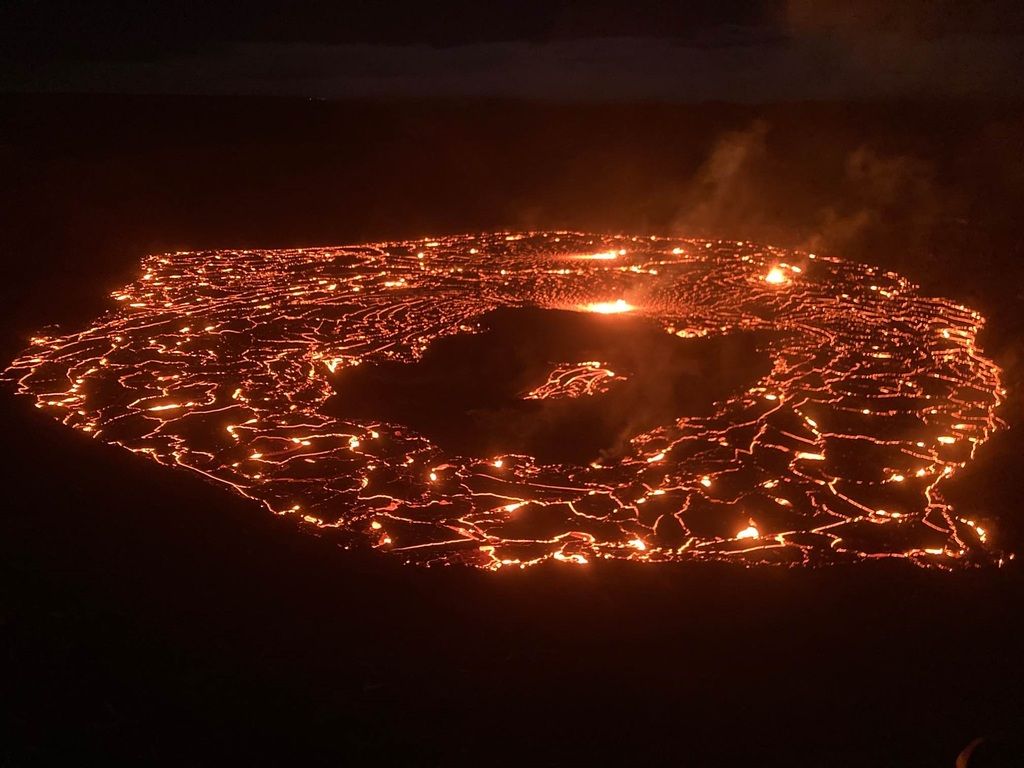 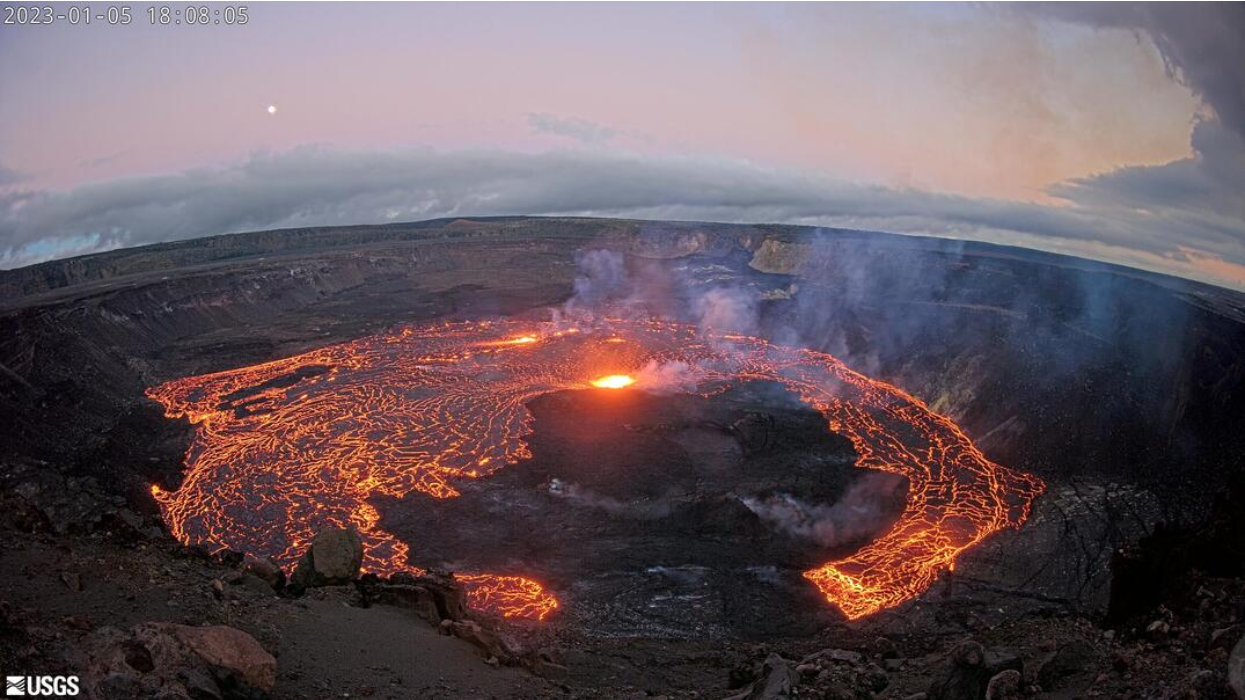 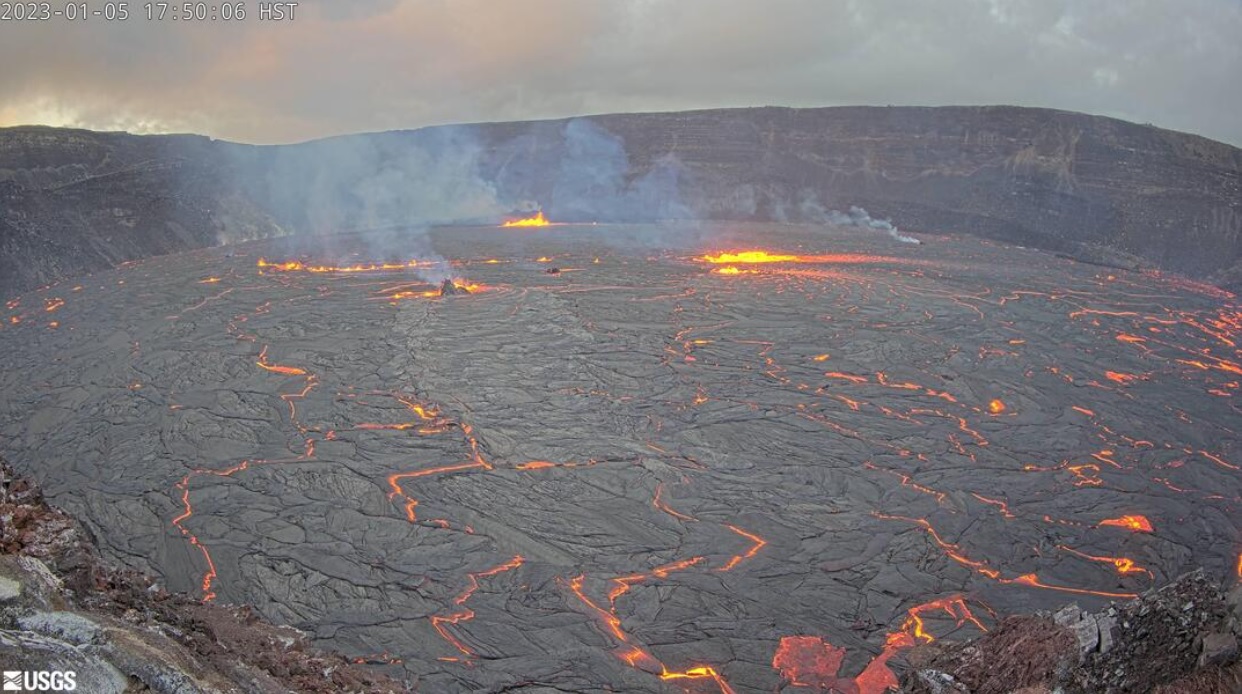 Typical slabs of dark, solidified crust have continued to shift on the lava field surface, accompanied by typical bright orange lava glow between them (image: HVO) 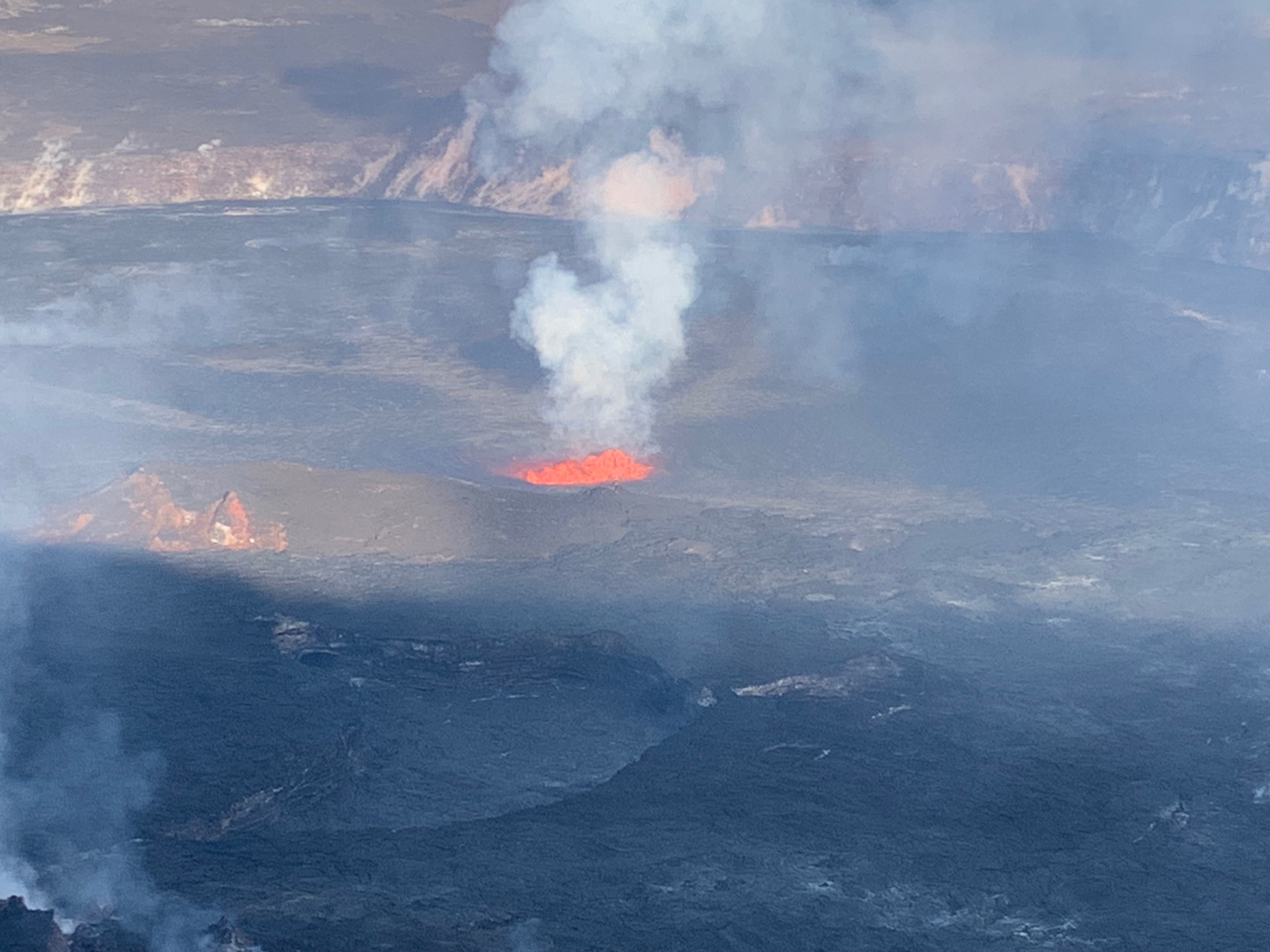 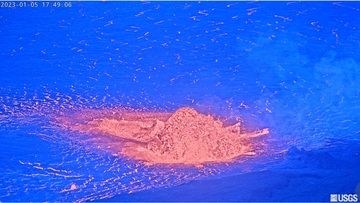 Colima volcano photos
This beautiful stratovolcano in western Mexico is one of the most active volcanoes on the American continents. It is known for its often spectacular explosions and sometimes glowing avalanches.
RSS feeds

Volcano & Earthquake news feeds
If you like to use RSS to access the latest news about volcanoes and earthquakes without needing to visit the site, have a look at our available news feeds!
Erta Ale + Dallol

1-3 day excursions
If you're interested in volcanoes, there are a number of excursions you should not miss if you're in the area: hike to the craters of Stromboli volcano, climb Etna volcano, get to know the unique volcanic history of Santorini - some examples of shorter (1-3 days) tours and excursions we offer.
Why is there advertising on this site?