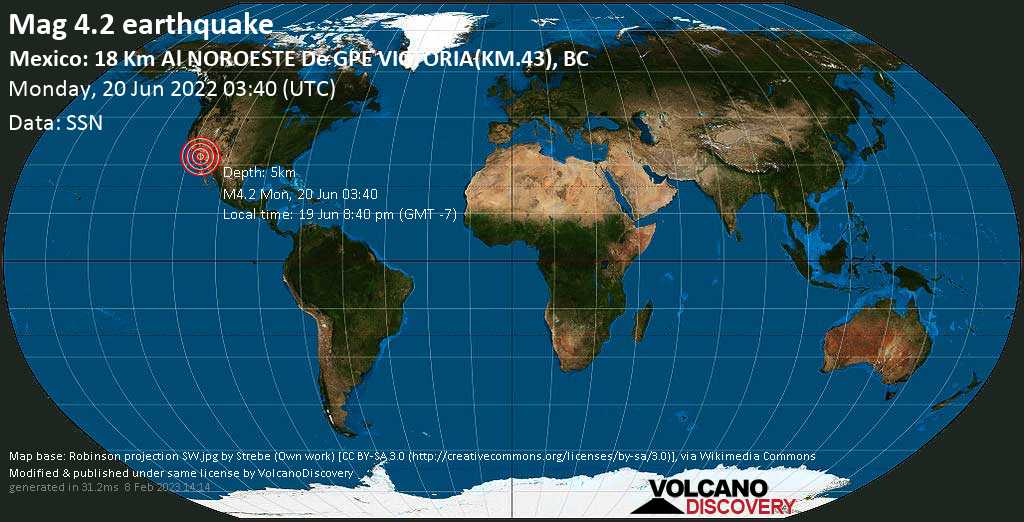 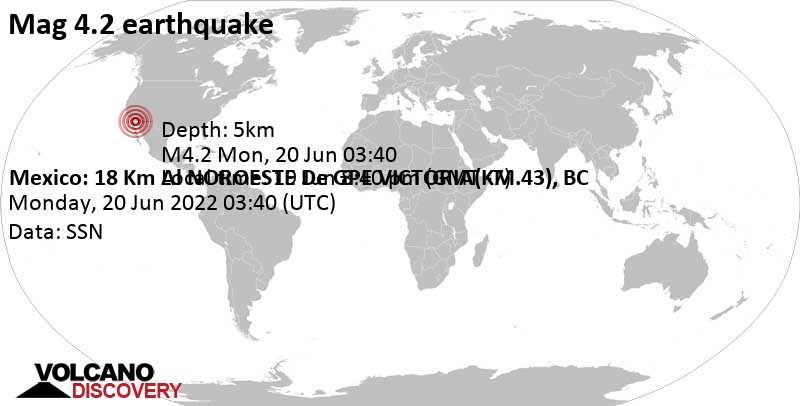 20 Jun 03:43 UTC: Πρώτα να αναφέρει: USGS after 3 λεπτά.
20 Jun 03:46: Magnitude recalculated from 3.7 to 3.8.
20 Jun 04:07: Now using data updates from SSN
Update Mon, 20 Jun 2022, 04:12
Moderate 4.2 quake hits near Mexicali, Baja California, Mexico
4.2 quake 19 Jun 8:40 pm (GMT -7)
A magnitude 4.2 earthquake near Mexicali, Baja California, Mexico, was reported 32 minutes ago by Mexico's National Seismological Service (SSN), considered the main national agency that monitors seismic activity in Mexico. The earthquake occurred at a very shallow depth of 5 km beneath the epicenter in the evening on Sunday, June 19th, 2022, at 8:40 pm local time. Magnitude and other quake parameters can still change in the coming hours as the agency continues to process seismic data.
A second report was later issued by the United States Geological Survey, which listed it as a magnitude 3.8 earthquake. Other agencies reporting the same quake include the citizen-seismograph network of RaspberryShake at magnitude 3.8, and the European-Mediterranean Seismological Centre (EMSC) at magnitude 3.5.
Based on the preliminary seismic data, the quake was probably felt by many people in the area of the epicenter. It should not have caused significant damage, other than objects falling from shelves, broken windows, etc.
In Margarito Medina (Ejido Nuevo Leon) (pop. 10) located 6 km from the epicenter, Nuevo Leon (pop. 3,700) 6 km away, and Delta (pop. 5,200) 6 km away, the quake should have been felt as light shaking.
Weak shaking might have been felt in Guadalupe Victoria (pop. 17,100) located 18 km from the epicenter, Doctor Alberto Oviedo Mota (pop. 8,100) 20 km away, Puebla (pop. 15,200) 22 km away, Mexicali (pop. 689,800) 33 km away, Calexico (pop. 40,100) 40 km away, and Santa Isabel (pop. 29,300) 41 km away.
Other towns or cities near the epicenter where the quake might have been felt as very weak shaking include San Luis Rio Colorado (pop. 158,100) located 45 km from the epicenter.
Download the Volcanoes & Earthquakes app and get one of the fastest seismic alerts online:
Android | iOS