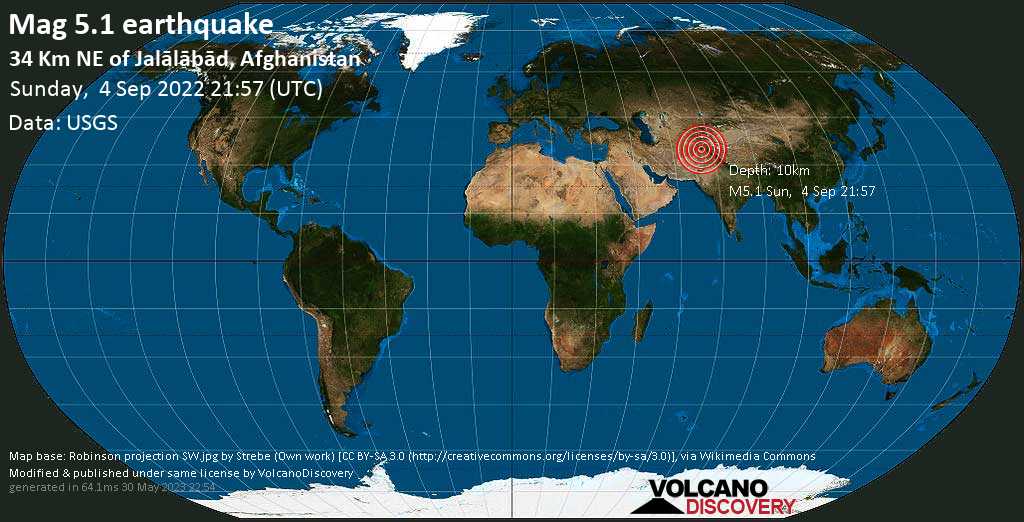 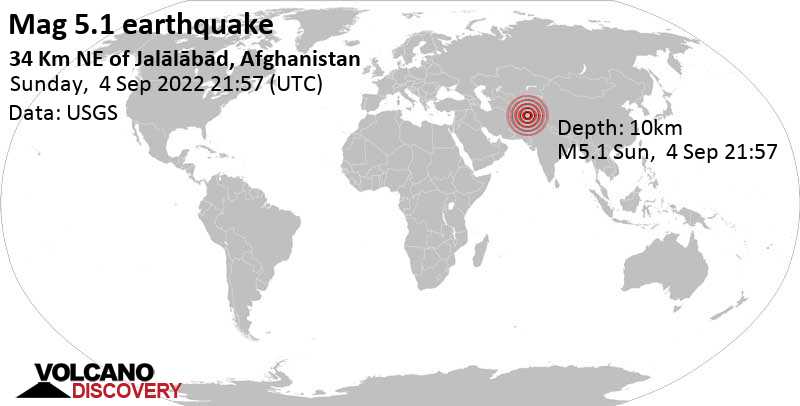 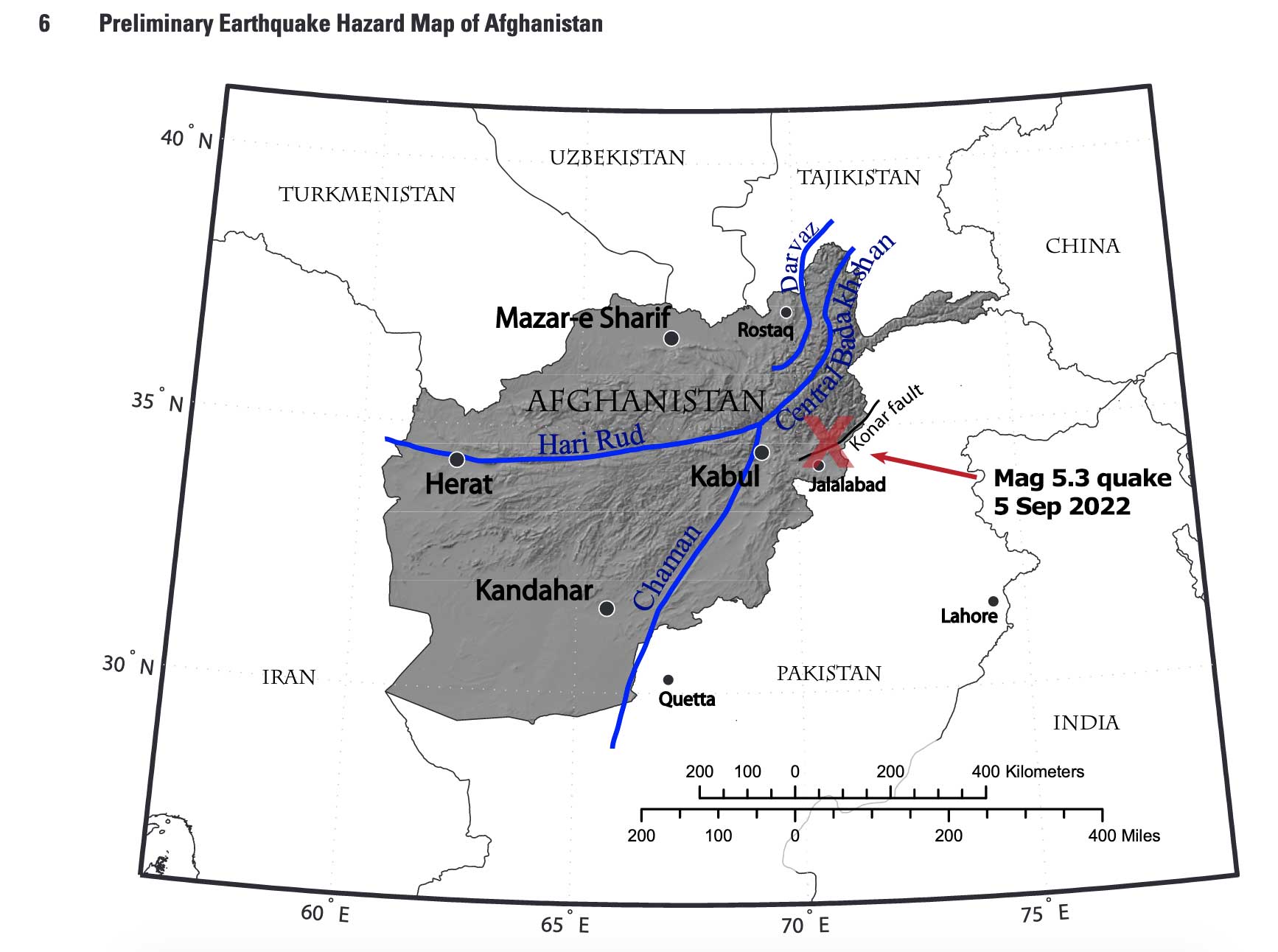 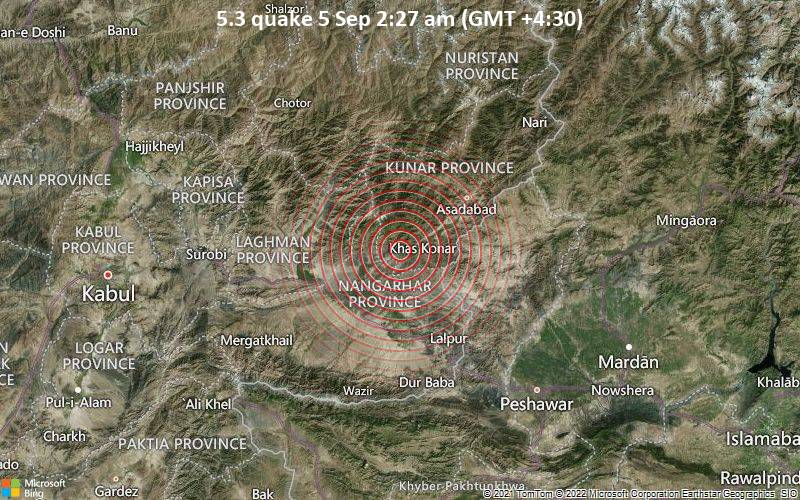 5.3 quake 5 Sep 2:27 am (GMT +4:30)
An earthquake of magnitude 5.3 occurred only 14 minutes ago 42 km southwest of Assad-Abad, Afghanistan, the German Research Centre for Geosciences (GFZ) reported.
The quake hit at a shallow depth of 10 km beneath the epicenter near Assad-Abad, Asadābād, Kunar, Afghanistan, early morning on Monday, September 5th, 2022, at 1:57 am local time. The exact magnitude, epicenter, and depth of the quake might be revised within the next few hours or minutes as seismologists review data and refine their calculations, or as other agencies issue their report.
Our monitoring service identified a second report from the citizen-seismograph network of RaspberryShake which listed the quake at magnitude 5.3 as well. A third agency, the European-Mediterranean Seismological Centre (EMSC), reported the same quake at magnitude 5.3.
Based on the preliminary seismic data, the quake was probably felt by many people in the area of the epicenter. It should not have caused significant damage, other than objects falling from shelves, broken windows, etc.
In Jalalabad (pop. 200,300) located 38 km from the epicenter, Assad-Abad (pop. 48,400) 42 km away, Bāsawul (pop. 6,800) 44 km away, and Markaz-e Woluswalī-ye Āchīn (pop. 15,100) 58 km away, the quake should have been felt as light shaking.
Weak shaking might have been felt in Āsmār (pop. 15,700) located 69 km from the epicenter, Shabqadar (pop. 66,500) 85 km away, and Tangi (pop. 29,400) 88 km away.
VolcanoDiscovery will automatically update magnitude and depth if these change and follow up if other significant news about the quake become available. If you're in the area, please send us your experience through our reporting mechanism, either online or via our mobile app. This will help us provide more first-hand updates to anyone around the globe who wants to know more about this quake.
Κατεβάστε την εφαρμογή Volcanoes & Earthquakes και λάβετε μία από τις ταχύτερες σεισμικές ειδοποιήσεις στο διαδίκτυο: Android | iOS
ΈΝΙΩΣΑ ΑΥΤΌ ΤΟ ΣΕΙΣΜΌ
I didn't feel it

Info: The more agencies report about the same quake and post similar data, the more confidence you can have in the data. It takes normally up to a few hours until earthquake parameters are calculated with near-optimum precision.
Πιο πρόσφατοι σεισμοί Top 20 τελ. 24 ώρες Σεισμοί: Πακιστάν

[Περισσότερες πληροφορίες]
Based on its magnitude, the fault that was active during the quake ruptured along a surface of approx. 13 km2 (=5 sqare miles) as a first-order estimate. The length of the rupture zone thus was probably around 6 km (4 mi).
Aftershocks typically occur during the days and weeks following the quake at or near the same fault, at distances of up to approx. two times the length of the rupture zone.
The often broadly linear arrangement of aftershock epicenters encompasses the rupture zone of the main shock (check on the map below to verify).