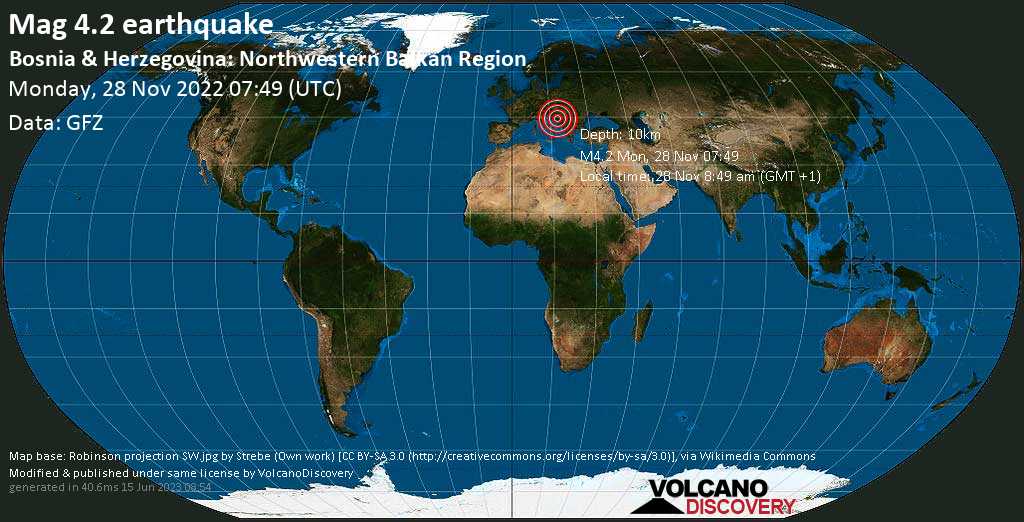 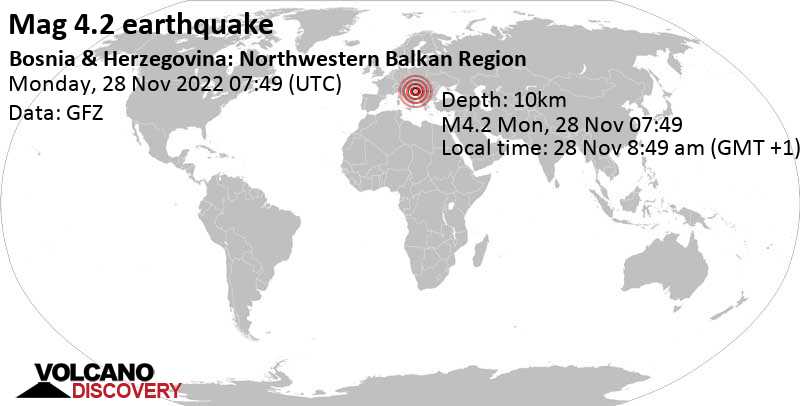 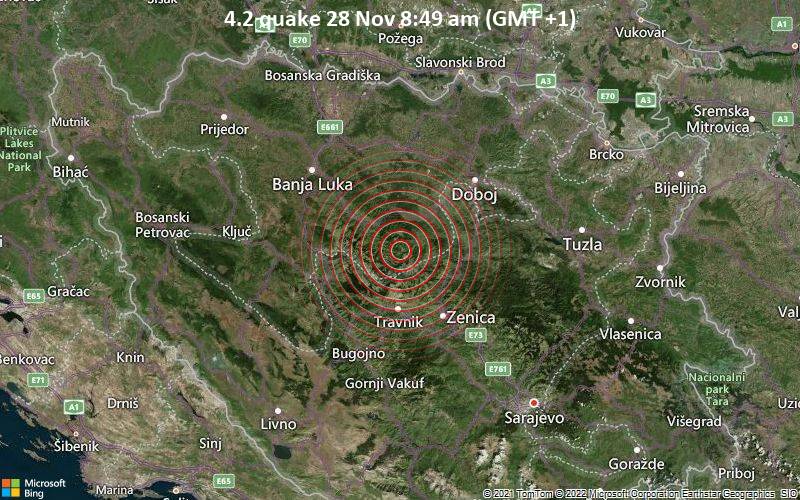 4.2 quake 28 Nov 8:49 am (GMT +1)
A magnitude 4.2 earthquake near Zenica, Federation of B&H, Bosnia & Herzegovina, was reported 37 minutes ago by the German Research Centre for Geosciences (GFZ), considered one of the key international agencies that monitor seismic activity worldwide. The earthquake occurred at a shallow depth of 10 km beneath the epicenter in the morning on Monday, November 28th, 2022, at 8:49 am local time. Magnitude and other quake parameters can still change in the coming hours as the agency continues to process seismic data.
Our monitoring service identified a second report from Austria's Central Research Institute for Meterology and Geodynamics in Vienna (ZAMG) which listed the quake at magnitude 4.6. Other agencies reporting the same quake include Italy's National Institute of Geophysics and Volcanology (INGV) at magnitude 4.3, the citizen-seismograph network of RaspberryShake at magnitude 4.2, and the European-Mediterranean Seismological Centre (EMSC) at magnitude 4.3.
Based on the preliminary seismic data, the quake should not have caused any significant damage, but was probably felt by many people as light vibration in the area of the epicenter.
Weak shaking might have been felt in Blatnica (pop. 5,700) located 12 km from the epicenter, Kneževo (pop. 6,900) 23 km away, Travnik (pop. 31,100) 26 km away, and Zenica (pop. 164,400) 34 km away.
Other towns or cities near the epicenter where the quake might have been felt as very weak shaking include Doboj (pop. 27,200) located 45 km from the epicenter, Bugojno (pop. 41,400) 48 km away, Banja Luka (pop. 221,100) 52 km away, Gračanica (pop. 15,800) 57 km away, Lukavac (pop. 44,500) 69 km away, and Sarajevo (pop. 696,700) 87 km away.
Κατεβάστε την εφαρμογή Volcanoes & Earthquakes και λάβετε μία από τις ταχύτερες σεισμικές ειδοποιήσεις στο διαδίκτυο: Android | iOS
ΈΝΙΩΣΑ ΑΥΤΌ ΤΟ ΣΕΙΣΜΌ
I didn't feel it

Info: The more agencies report about the same quake and post similar data, the more confidence you can have in the data. It takes normally up to a few hours until earthquake parameters are calculated with near-optimum precision.
Πιο πρόσφατοι σεισμοί Top 20 τελ. 24 ώρες Σεισμοί: Βοσνία και Ερζεγοβίνη