Current activity of Bardarbunga volcano, Iceland
An intense seismic crisis started at Bárdarbunga volcano on 16 August 2014 and is continuing at the time of writing (23 Aug). It may or may not lead to a volcanic eruption, possibly under the Vatnajökull ice cap.
Follow updates as news come in! 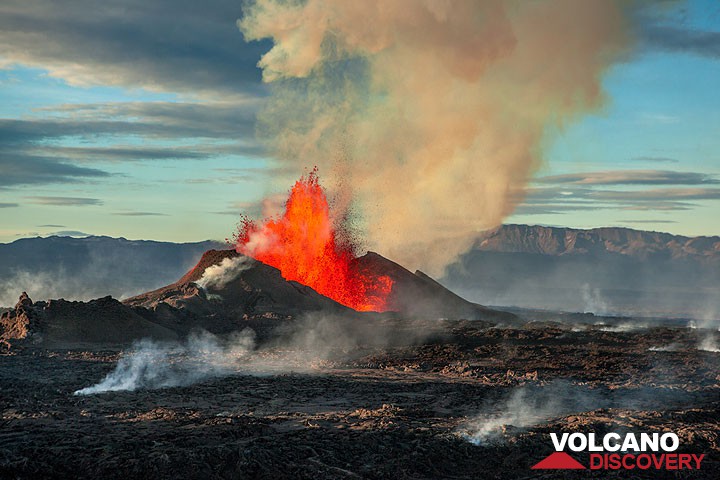 Bardarbunga (Bárðarbunga) is a large central volcano lying underneath Iceland's 500-m thick Vatnajokull glacier in the center of the country. It is located at the junction between the eastern and northern volcanic rift zones in the area where the present-day center of the mantle hot spot beneath Iceland is thought to be.
Bardarbunga has had about 300-400 eruptions during the past 10,000 years which includes only 23 eruptions historic times (approx the past 1000 years), i.e. it seems to erupt currently at rates of approx. twice per century, the last one having occurred in 1910. A massive explosive-effusive eruption (VEI 6) in 1477 resulted in a large ash and pumice fall-out deposit.
Approx 8600 years ago, Bardarbunga produced the largest known lava flow during the past 10,000 years on earth (more than 21 cubic kilometers of volume). The lava was erupted from the Veidivötn fissure system and traveled more than 100 km to the south coast.

The volcano is hidden beneath the northwestern part of the Vatnajökull glacier, and contains a 700-m-deep caldera that is hidden beneath ice and has extensive flank fissures, from where eruptions have taken place: the Veidivötn fissure extends for over 100 km to the SW, almost reaching Torfajökull volcano, while the Trollagigar fissure extends 50 km to the NE touching Askja volcano.

A major risk from Bárdarbunga are jökulhlaups (glacier-outburst floods), that can be hazardous for areas in all directions around Bárdarbunga.

The Icelandic Met Office (IMO) recorded an earthquake with magnitude M 4.8 at 9.1 km depth in Bárðarbunga volcano at 00:06 local time yesterday. Few smaller aftershocks have been detected in the area. Tremor has not shown significant variations. The earthquakes of this magnitude (M 4.8) were detected in April and January this year. Read all
Tue, 14 Jul 2020, 08:53
Bardarbunga volcano (Iceland): seismic unrest yesterday

On 13 July at 23:41 local time Icelandic Met Office (IMO) recorded an earthquake with magnitude M 3.0 at 2.4 km depth beneath the SE caldera. In one hour later an earthquake M 3.3 occurred in similar location. Last time an M 3.0 or larger earthquake occurred about a month ago. ... Read all
Try our free app!

Sakurajima volcano photos
One of the world's most active volcanoes, Sakurajima on Japan's Kyushu Island is famous for its frequent vulcanian explosions, often accompanied by eruption lightning.
Kilauea

Kilauea volcano photos
The most active volcano in the world with a record long lasting eruption since 1983: images of lava flows, lava lakes, explosions, lava meeting the ocean, aerials and more.
Quake Reports

Glossary of geologic terms
A growing list of often illustrated explanations and definitions of geological terms and keywords, with focus on volcanology and seismology.
Quakes Felt

See quakes that people felt in the last week
Why is there advertising on this site?
Support us - Help us upgrade our services!
We truly love working to bring you the latest volcano and earthquake data from around the world. Maintaining our website and our free apps does require, however, considerable time and resources.
We need financing to increase hard- and software capacity as well as support our editor team. We're aiming to achieve uninterrupted service wherever an earthquake or volcano eruption unfolds, and your donations can make it happen! Every donation will be highly appreciated. If you find the information useful and would like to support our team in integrating further features, write great content, and in upgrading our soft- and hardware, please make a donation (PayPal or Online credit card payment).