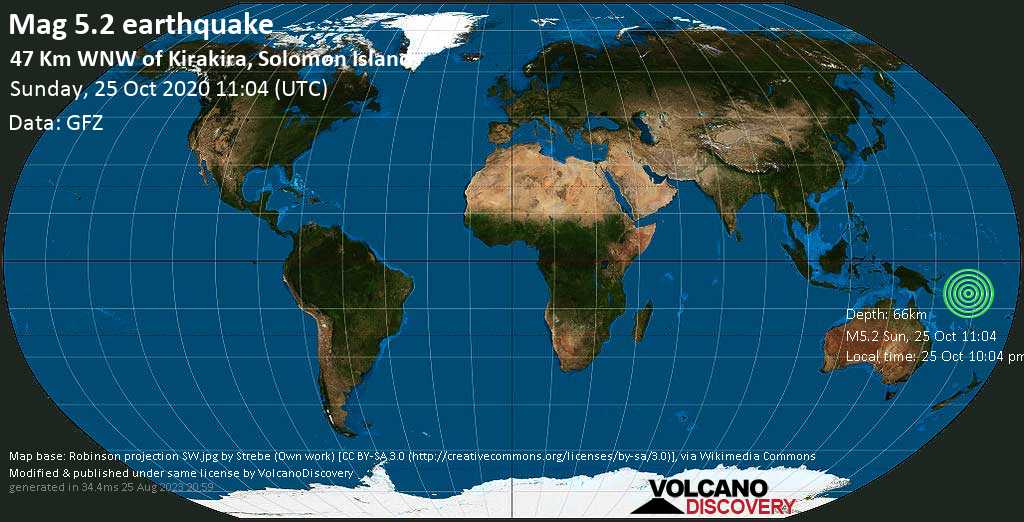 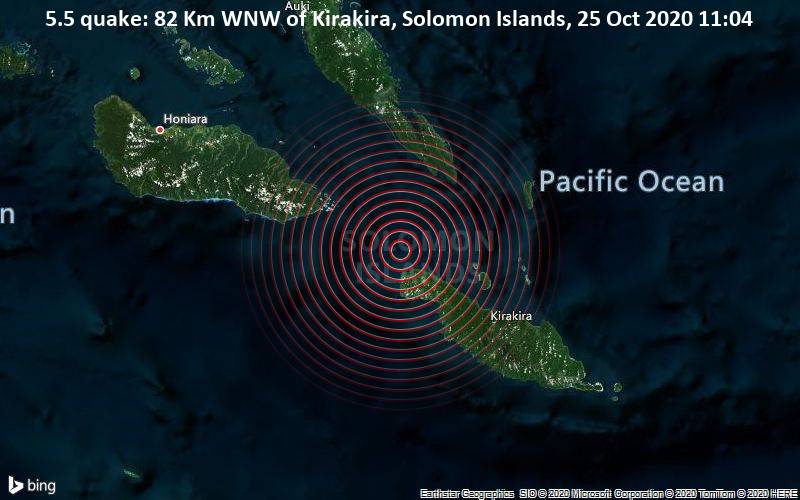 5.5 quake: 82 Km WNW of Kirakira, Solomon Islands, 25 Oct 2020 11:04
A shallow magnitude 5.5 earthquake was reported late at night near the town of Kirakira, Solomon Islands. According to the German Research Centre for Geosciences in Potsdam (GFZ), the quake hit late at night on Sunday 25 October at 10.04 pm local time at a shallow depth of 10 km. Shallow earthquakes are felt more strongly than deeper ones as they are closer to the surface. The magnitude, exact epicenter location and depth of the quake are likely to be revised within the next few hours as seismologists review data and refine their calculations, or as other agencies issue their report.
A second report was later issued by the European-Mediterranean Seismological Centre (EMSC) agency, which listed it as a magnitude 5.1 earthquake.
Based on the preliminary seismic data, the quake should have been widely felt by almost everyone in the area of the epicenter. It might have caused light to moderate damage.
Towns or cities near the epicenter that are likely to be affected include Kirakira (pop. 1,100) at a distance of 82 km with light shaking, Auki (pop. 6,800) at a distance of 160 km with weak shaking, Honiara (pop. 56,300) at a distance of 162 km with weak shaking, and Tulagi (pop. 1,800) at a distance of 165 km with weak shaking.
This story will be updated soon by VolcanoDiscovery. If you’re in the area, please send us your experience through our reporting mechanism. This will help us provide more first-hand updates to anyone around the globe who wants to know more about this quake.
Download the Volcanoes & Earthquakes app to get one of the fastest seismic alerts online:
Android | IOS

Bromo volcano photos: Bromo is one of Indonesia's most visited volcanoes. It is the most active vent inside the huge Tengger caldera and erupts every few years.
Kuril Islands

Photos from Iceland: Volcanoes in the land of fire and ice. Iceland is one of the volcanically most active places on earth.
Why is there advertising on this site?