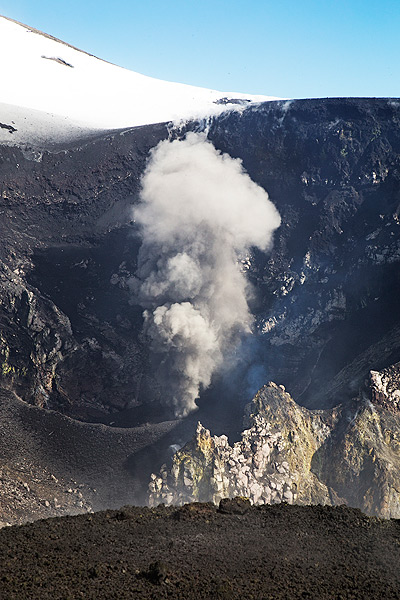 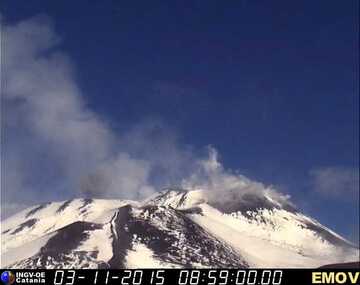 Ash emission from Bocca Nuova crater (Montagnola webcam, INGV Catania)
On November 1st a quite energetic seismo-volcanic event occurred most probably from the Bocca Nuova crater. Since that time there has been a change in the seismic tremor.
During last weekend cloud cover prevented direct observations but today it was possible to observe very weak ash emissions most probably due to the activity inside the Voragine crater. 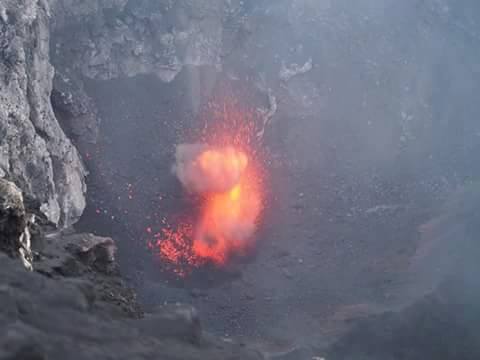 Strombolian activity inside Etna's Voragine crater (photo: Biagio Ragonese / EtnaWeb)
After several weeks of calm, new activity has started during the past days inside the central Voragine crater. Mild strombolian explosions have been observed from a vent at the bottom of the crater.
Photo credit: Etna Web (facebook) 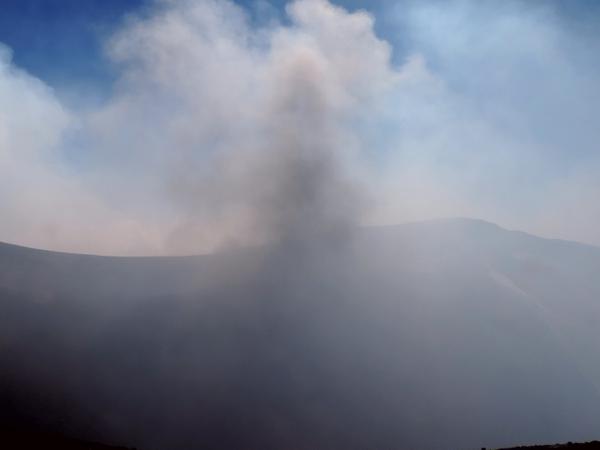 Ash emission from Etna's Voragine (photo: Boris Behncke / twitter)
Etna has been mostly calm during the past months. However, signs of unrest have appeared in the form of dilute ash emissions from the central crater (Voragine).
The emissions originate probably from older material, but according to volcanologists, magma is not far from the surface. 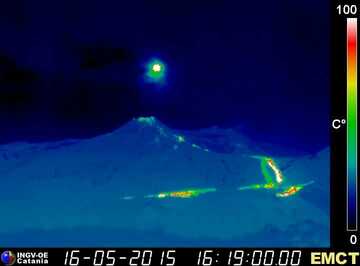 Current tremor signal (ECPN station / INGV Catania)
The eruption has almost ended.
Tremor has descended back to low levels and lava effusion has almost completely ceased and stopped ca. 5 km from eruptive fissure .
The most advanced flow front is slightly below 1700 m elevation just above Rocca Musarra.
Explosive activity and ash emissions seem to have ceased. 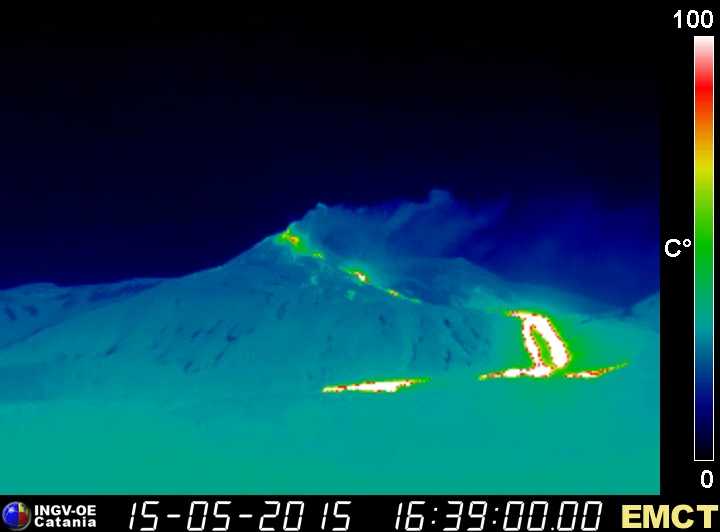 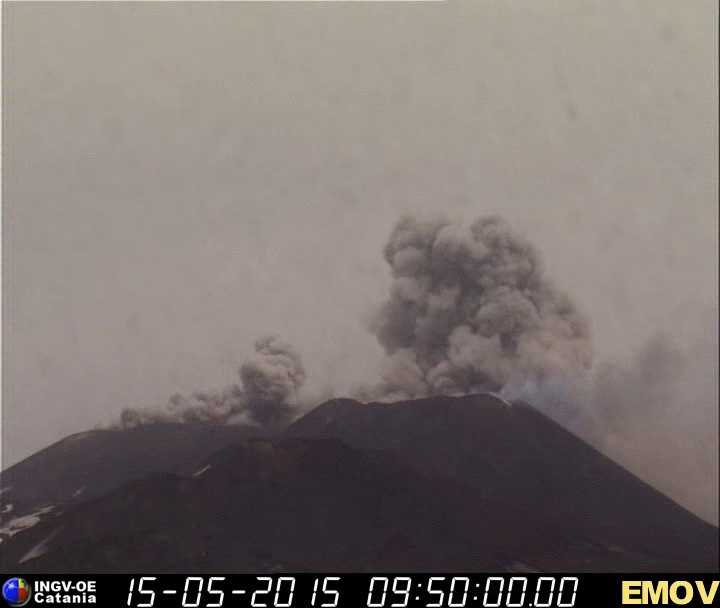 Ash emissions from Bocca Nuova crater (Montagnola webcam, INGV Catania)
The eruption continues, although its intensity has decreased compared to yesterday.
Moderate strombolian explosions occur at the summit vent of the New SE crater and lava effusion from the fissure vents at its base continues to feed the lava flow, which since yesterday evening has split into 2 branches in the northern Valle del Bove one descending to the south of Monte Simone and another towards the center of the valley.
At 11:50 (local time ) a moderate explosion occurred at Bocca Nuova crater followed by intermittent ash emissions.

Strombolian activity and the lava flow this morning (14 May) (photo: Emanuela / VolcanoDiscovery Italia) 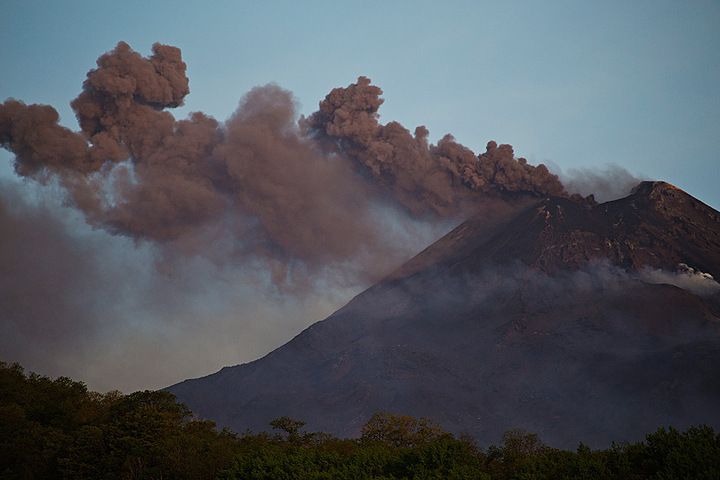 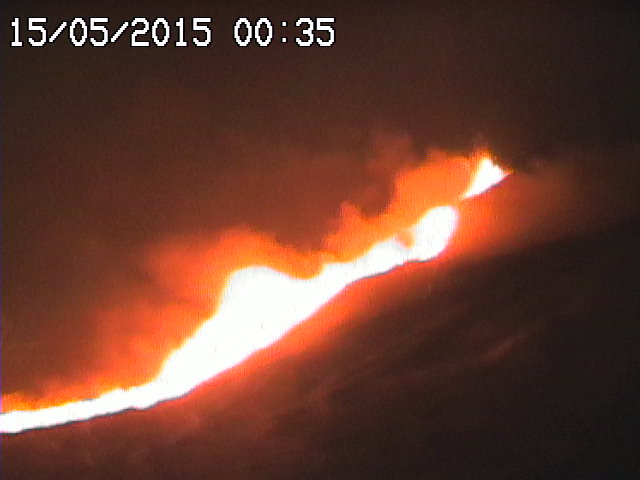 Lava flow and strombolian activity this evening
A new paroxysm is occurring at the volcano. Increasing near-continuous strombolian eruptions occur from the summit vent of the New SE crater and a lava flow is issuing from a vent at its eastern base into Valle del Bove. Tremor is still rising.
After the onset of mild strombolian activity on 12 May, activity first decreased during the night 12-13 May and then started to rise again gradually. Early in the morning (between 06:11-06:23 local time), an effusive fissure opened on the eastern flank of the cone, from where a lava flow emerged. Accompanied by violent collapse events, triggering small pyroclastic flows, the fissure enlarged during the morning and lava effusion increased. At the same time, explosive activity at the summit vent continued intermittently.
During the night 13-14 May, the activity - both effusive and explosive - significantly gained strength and tremor continued to rise. By the morning of 14 May, a second effusive vent opened below the first one at the base of the cone, and the lava flow had a length of approx. 1.5 km and had passed Monte Simone in the northern part of Valle del Bove.
During the day until the evening, activity has continued to increase slowly. Strombolian explosions have been merging into low, pulsating fountains and the lava flow has extended more than 4 km by now. 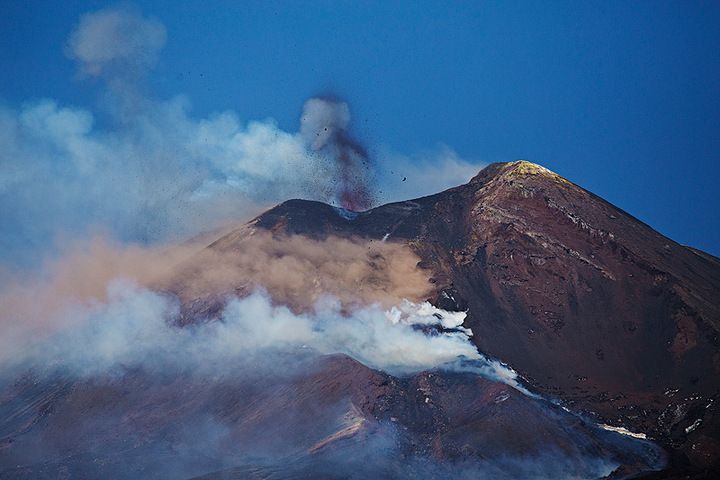 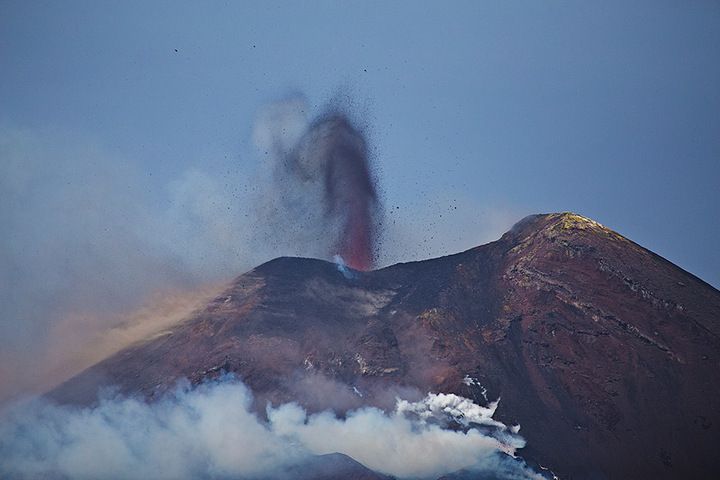 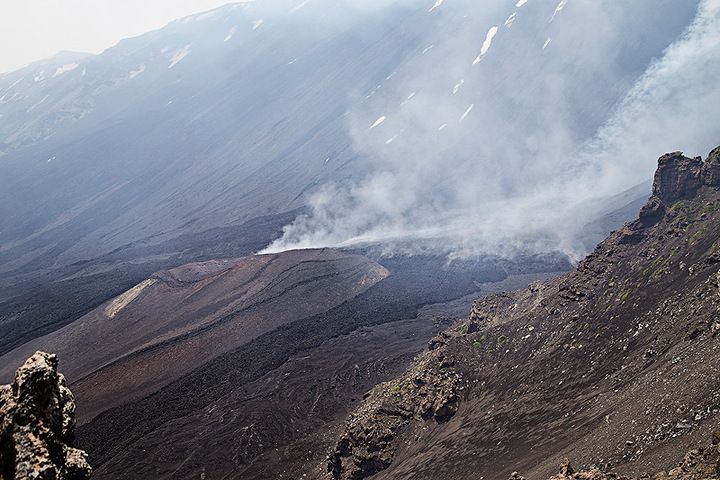 The lava flow at Monte Simone 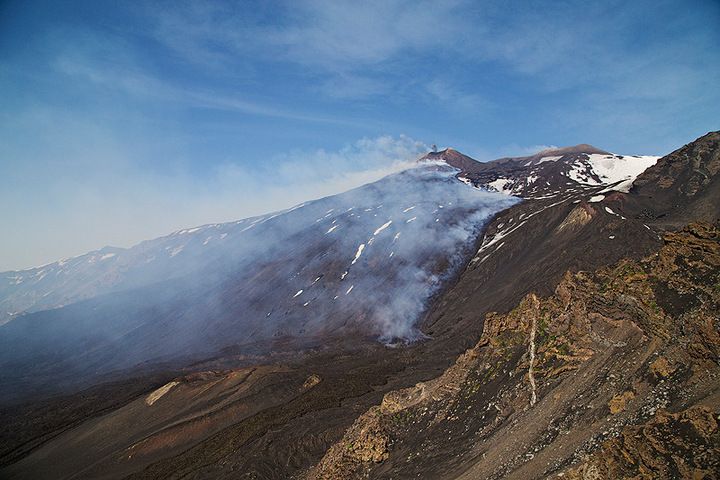 View of the northern sector of Valle del Bove
Some impressions of today's activity by Emanuela / VolcanoDiscovery Italia: 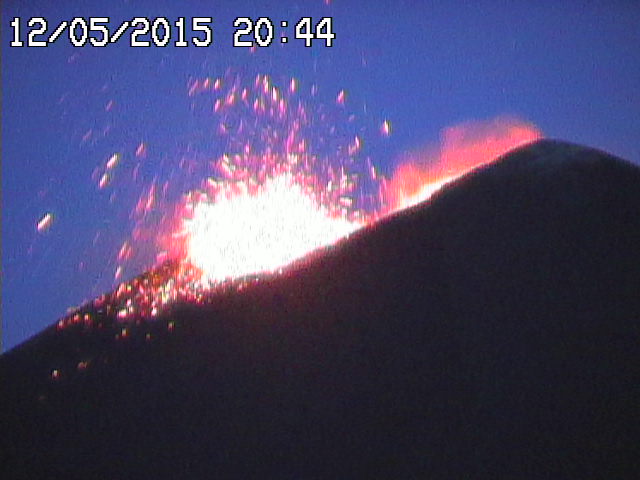 Current tremor amplitude (ECPNZ station, INGV Catania)
Strombolian activity began again today at the New SE crater. Accompanied by rising tremor, this activity is increasing at the moment.
The current pattern is very similar to many past episodes which often culminated in violent explosive (lava fountaining) and effusive (lava flow) paroxysms and could very well build up to a new one, maybe similar to the previous one during 1-2 Feb this year. 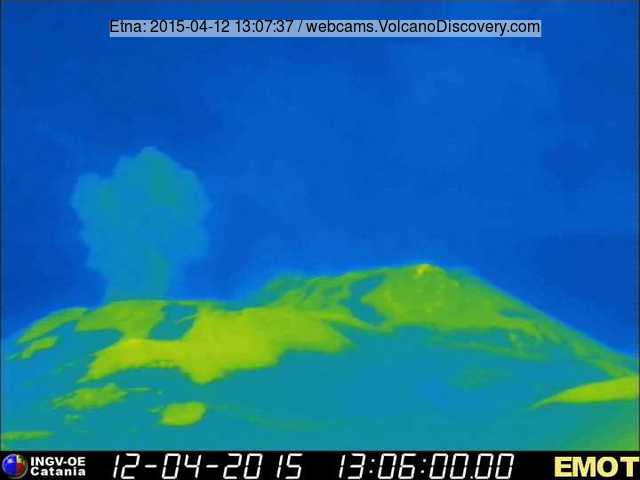 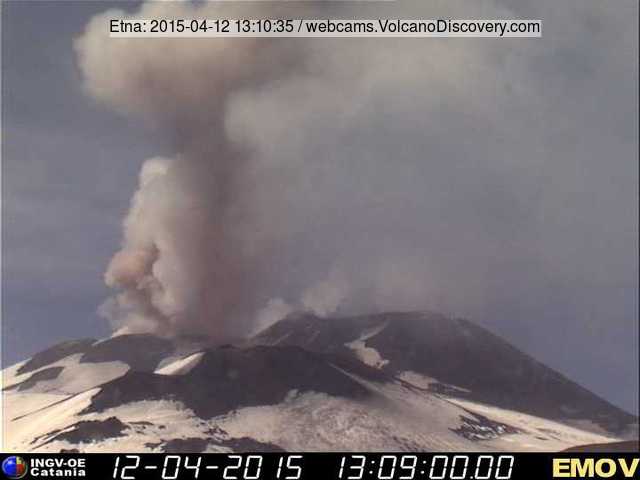 Some impressions from the new lava flow on Etna's SW side 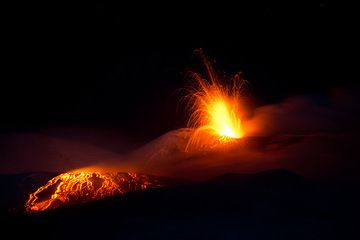 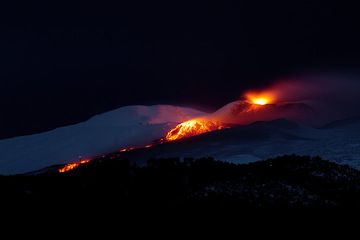 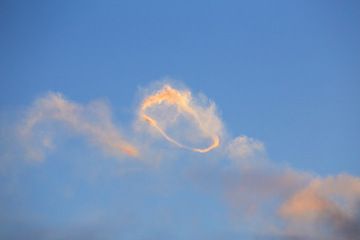 
Large lava flow to the SW side

Update Sun 01 Feb 23:43
More details start to emerge about the new eruptive phase. Strombolian activity from the SE crater accompanies important lava effusion, feeding an impressive lava flow.
The lava flow has been taking a path to the SW, passing the 2002 cones on their western side and descending already to approx. 2000 m or less altitude, a few km west of the provincial road to La Sapienza.
Sources: Etna Walk, Boris Behncke and others 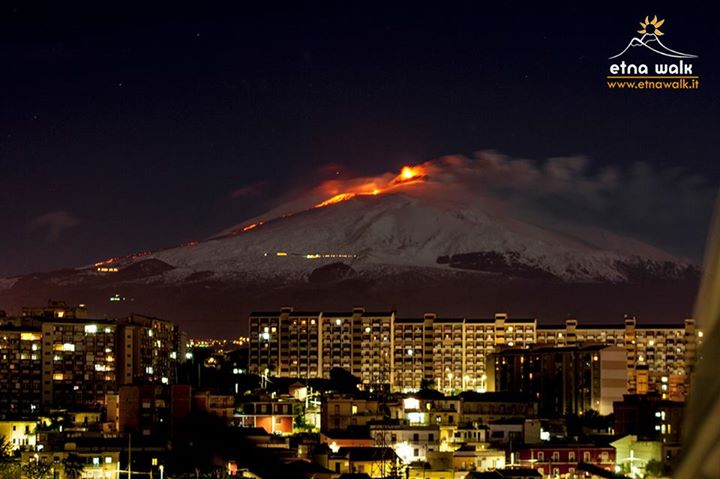 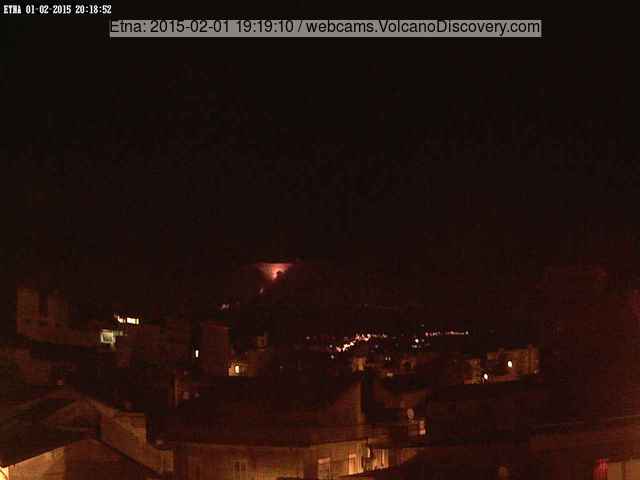 Etna seen from Paternó on the SSW flank

Current tremor amplitude (ESLN station, INGV Catania)
The new eruptive phase continues. Dense cloud cover has prevented detailed observations, but from occasional clearings and other observations, it seems that the intense strombolian eruptions are going on from a vent between the old and New SE crater, feeding a lava flow, at least 2.5 km long onto the southwestern slope.
Tremor remains high.

Current tremor signal (ESLNZ station, INGV Catania)
After a few days of apparent calm, new activity resumes on Etna: Seismic tremor started to rise steeply this morning about 6:00 (local time). At the moment it is still elevated with an overall increasing tendency.
Unfortunately, the weather is very bad to see what is going on.
Ash fall was reported in the east sector of the volcano. 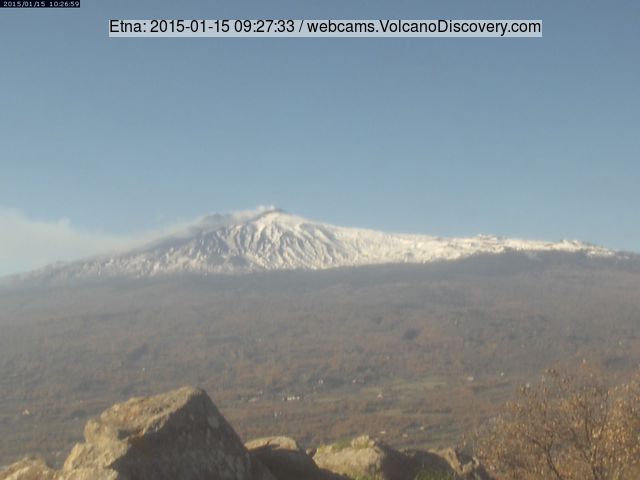 Dilute ash emissions from Etna's NE crater on 15 Jan 2015 (Etnatrekking webcam Linguaglossa)
Unrest continues at the summit craters. After strombolian activity from the Central Crater (Voragine) had ceased around 13 Jan, weak ash emissions occurred from the North-East crater yesterday.
Tremor remains elevated.
Older updates
First visit to our site? If you havn't done it yet, download the Volcanoes & Earthquakes app to get one of the fastest volcano news online:
Android | IOS

The latest updates are on the top. Reload this page from time to time if you want to check for updates. If you like to share and contribute, you are welcome to leave a comment.
Try our free app!