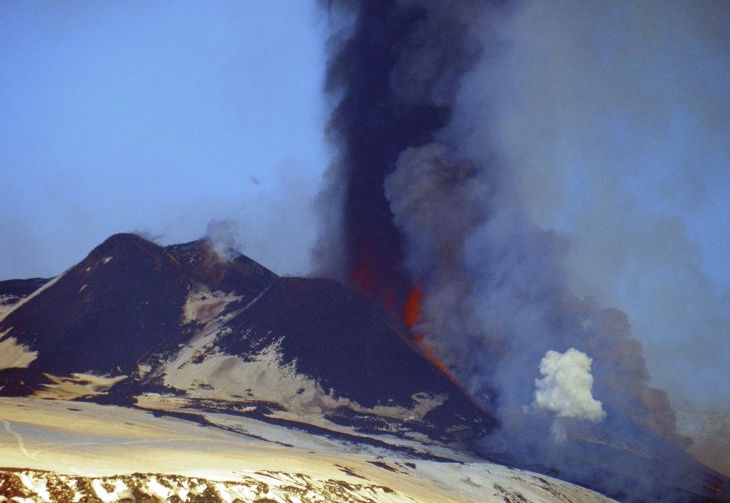 Lava fountaining from the NSEC during the 22nd paroxysm (photo: Boris Behncke)
abbreviated USGS / GVP version of the official report by INGV Catania:

The 22nd paroxysm at New SE Crater (New SEC) of Etna occurred during the morning of 18 March following two weeks of quiescence. Roaring from high-pressure degassing was heard on 16 March. The next day there was incandescence and multiple vapor clouds with minor ash content that rose from New SE Crater. In the early hours of 18 March the incandescence intensified due to Strombolian activity on the crater floor, and volcanic tremor amplitude rapidly increased. Strombolian activity continued to intensify, and just before 0700 lava flowed through the deep breach in the SE crater rim. At about 0825 the ash content in the gas plume rising from the crater became more significant and pulsating lava fountains from a vent on the crater floor rose about 100 m high. Shortly before 0900 two vents were active within the crater and a jet of lava was emitted from another vent within the breach in the SE crater rim.

During 0900-0915 lava fountaining was essentially continuous from all three vents. An intense shower of coarse-grained pyroclastic material falling onto the N and NE flanks of the cone generated avalanches and clouds of rock and dust, which traveled to the base of the cone. A plume rose 4-5 km above Etna and drifted E. Ash and lapilli fell mainly in the area between the villages of Zafferana Etnea and Sant'Alfio, extending toward the Ionian Sea between Riposto and Pozzillo.

The main lava flow descended the steep W slope of the Valle del Bove. Several lava lobes, however, took a more northerly path to areas covered with thick snow. The interaction of the lava and snow led to rapid melting of the snow, generating small lahars, and strong explosions that produced ground-hugging vapor-and-ash clouds resembling pyroclastic flows, which repeatedly descended on the floor of the Valle del Bove. The vapor-and-ash clouds rose 1-1.5 km above the floor of the Valle del Bove. This phenomenon continued intermittently for some time after the cessation of the lava fountaining and ash emission, until about 1130.

Lava fountaining and strong ash emission continued without significant variations until about 1040; afterwards the activity rapidly diminished in intensity, and the last ash clouds were observed around 1110. Similar to the previous episodes, the lava that flowed through the breach in the SE crater rim advanced for several hours after the cessation of the paroxysmal activity into the upper part of the Valle del Bove. The lava reached a distance of about 4 km from the source, stagnating S of Monte Centenari. A small lava flow, emitted from a fracture on the N flank of the cone, followed the same path as a flow emitted from the same fracture during the 4 March paroxysm, and traveled a few hundred meters.
Update Sun 18 Mar 11:39
The eruption is already ending. Similar to the last paroxysm on 4 March, it was a rather short event. 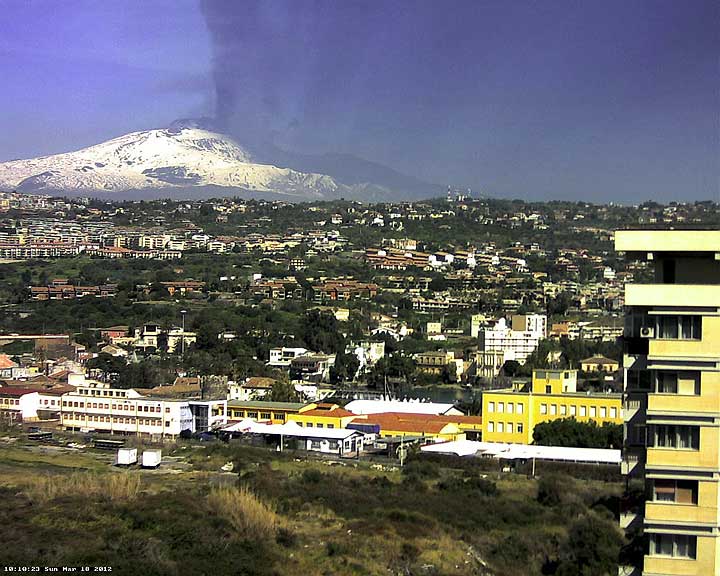 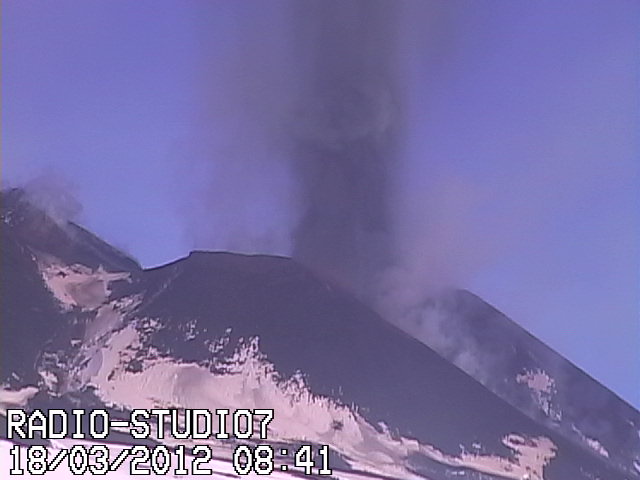 The steep rise of volcanic tremor (INGV Catania)
The strombolian activity from the New SE crater which had started yesterday continued during the night. From 03:30 local time, the glow had been continuous and the frequency of explosions rose to 25-30 per hour. Large incandescent bombs were observed landing on the outer flanks of the cone.
At the time of writing (8:30 local time), another paroxysm is about to occur. Strong explosions generating a rising ash plume and a steep increase of tremor can be observed.
The intervals between paroxysms are becoming shorter, as well as the precursor activity ! 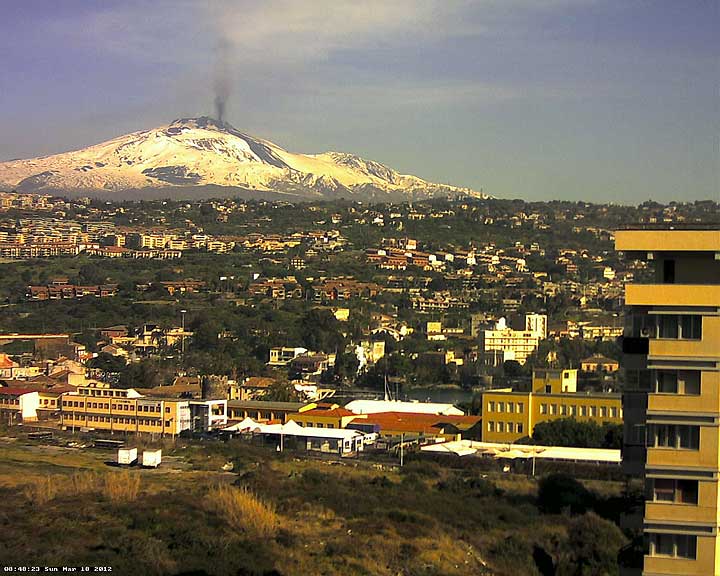 The start of the paroxysm seen from Catania 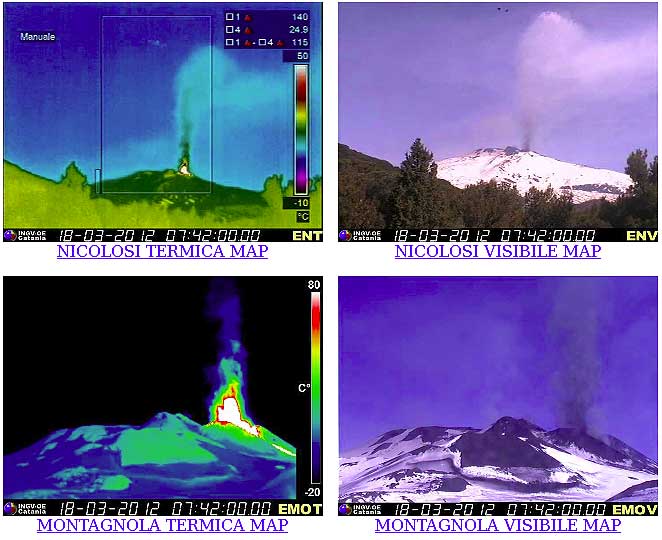 INGV webcam images at the beginning of the paroxysm
Reader Jani Patanen kindly sent us the following images from Catania:

Update Sat 17 Mar 17:38
Since this morning, weak explosive activity has been observed from the new South East crater (NSEC). Small ash ejections were observed by Etna Walk from Piano del Lago, accompanied by distinct explosions, and in some cases forming small ash mushrooms that rose and dissipated some 100 m above the crater.
Seismic signals of INGV show no significant changes of volcanic tremor, but this could be the start of the foreplay towards another paroxysm if Etna's eruptive behavior stays as has been during the past 14 months.
Source: Esplosioni al Cratere di SudEst (LAST UPDATE 12:25 UTC+1) - sabato, 17 marzo 2012 (Etna Walk)
Update Mon 05 Mar 13:07
Weather is deteriorating, and there might not be much visibility at the summit, but most likely, there will be a pause in activity now after the eruption yesterday, until ...?

Tremor signal has dropped back to background level 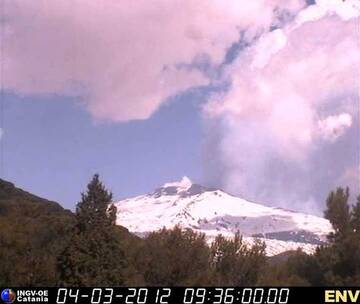 Etna seen from Nicolosi; the eruption has stopped
The eruption has ended, this time very quickly as often during paroxysms of Etna. Tremor is back to near zero, and the eruption column and lava fountains have disappeared, as the magma column inside the conduit has dropped.
The wait for the next eruption can begin!
First visit to our site? If you havn't done it yet, download the Volcanoes & Earthquakes app to get one of the fastest volcano news online:
Android | IOS

After two weeks of relative calm, the New Southeast Crater of Etna has produced a new paroxysmal eruptive episode on the morning of 18 March 2012, the 22nd such event in the series initiated in January 2011.
As its predecessors, also this episode has been characterized by tall lava fountains, a tephra and vapor column several kilometers high (leading to ash and lapilli falls over the eastern sector of the volcano), and lava flows that descended into the Valle del Bove, locally interacting explosively with thick snow cover on the ground. The paroxysmal phase lasted less than two hours. A more detailed report will be posted here on Monday, 19 March 2012.
(Source: INGV Catania)

Kilauea volcano photos
The most active volcano in the world with a record long lasting eruption since 1983: images of lava flows, lava lakes, explosions, lava meeting the ocean, aerials and more.
Ibu

Ibu volcano photos
Ibu in Halmahera is one of the most active, but rarely visited volcanoes in Indonesia. A spectacular lava dome is growing inside the volcano's breached crater, with frequent explosions.
Find Quakes

Find an earthquake
Look up quakes anywhere in the world, near your city or region!
Top 20 quakes

Largest 20 earthquakes past 24 hrs
Our continuously updated worldwide map and list of the most recent largest earthquakes in the world during the past 24 hours.
You can also find top 20 lists for given past days / months / years from the archive.
Nyiragongo

Nyiragongo volcano photos
Nyiragongo (DR Congo) has the world's largest and most active lava lake. Enjoy our pictures taken during several expeditions over the past years.
Why is there advertising on this site?