On the morning of 24 April 2012, Etna's new South-East Cone erupted its 25th paroxysm of the sequence started on January 2011. Marco Fulle was able to film the eruption from Schiena dell'Asino, at about 4km South of the vent. 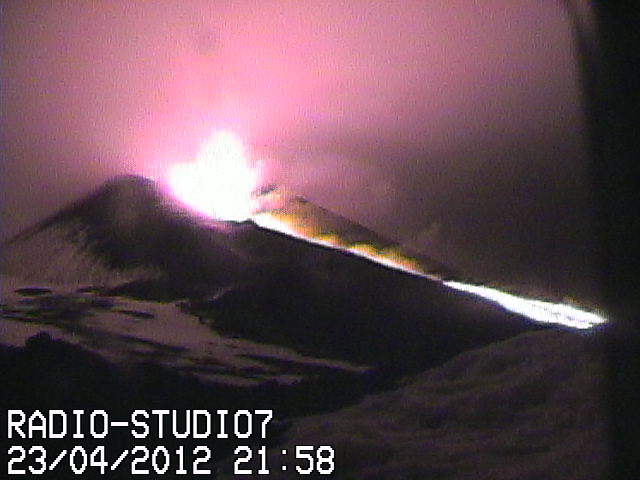 Strombolian activity and the lava flow from the NSEC
The 25th paroxysm of Etna's New SE crater is happening at the time of writing. It started around 16:00 hrs local time with week Strombolian explosions accompanied by a steeply increasing tremor. Now, explosions are becoming near-continuous and a lava flow is being emitted from the SE-running fissure of the cone and flowing into the Valle del Bove.

Update Sat 21 Apr 00:04
Weak ash emissions from deep strombolian activity within the New SE crater has been observed since last evening (20 April). If the eruption patterns remains more or less the same, a new paroxysm is probably under way within the next days.
Part of our team is under way in the hope to see it.
Update Sun 15 Apr 16:36
Etna is calm after the paroxysm on 12 April. It seems that the intervals are becoming shorter again, and probably, a next paroxysm could be expected in about a week from now. 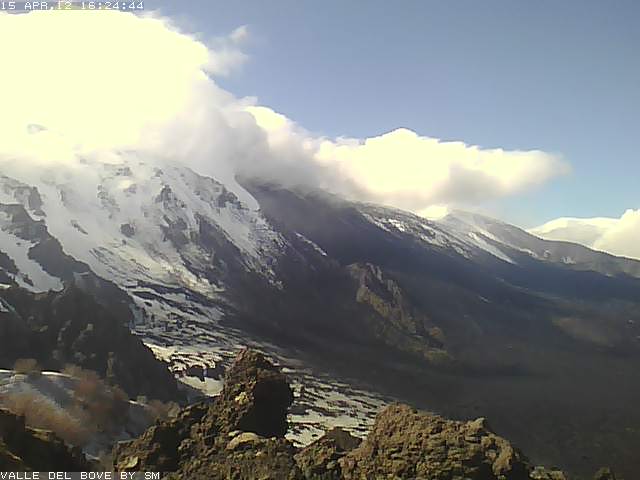 Etna seen from Schiena dell'Asino (Etna-Trekking webcam 4)
First visit to our site? If you havn't done it yet, download the Volcanoes & Earthquakes app to get one of the fastest volcano news online:
Android | IOS

The 25th paroxysmal eruptive episode since January 2011 took place at New SE Crater (New SEC) of Etna during the morning of 24 April following about 11 days of quiescence.
During 21-22 April a series of small ash emissions observed by web cameras drifted downslope to the E. On 22 April prolonged emissions of white vapor rose from an area in the upper portion of the fissure that cuts the SE flank of the cone. At night several incandescent spots were visible on the NE and S crater rims, where hot gas heated the surrounding rocks.
On 23 April a small thermal anomaly in the area of New SE Crater was produced by a tiny lava flow, which issued from the same vent that had produced the prolonged vapor emissions on the previous day. The lava flow slowly advanced a few hundred meters toward the Valle del Bove, but stagnated on the W rim. Another lava flow was produced later that day.
At around 1800 the effusive vent started to vigorously spatter. A second vent became active a few tens of meters further upslope, which initially ejected spatter, but activity rapidly evolved into frequent Strombolian explosions accompanied by a slow rise in the volcanic tremor amplitude. During the following hours, sporadic explosions were also observed from a vent located within the New SEC; the activity remained more or less consistent, while the volcanic tremor amplitude fluctuated at only slightly elevated levels. At 0210 0n 24 April the Strombolian activity showed a marked increase and turned into sustained lava fountaining at 0230. A plume with a heavy load of ash and lapilli rose a few kilometers, drifted NE, and produced ashfall 15-17 km NE in Linguaglossa, Piedimonte, and Presa. The upper part of the plume drifted E and produced pea-sized lapilli fall in the area between Fornazzo (10 km E) and Giarre (17 km E).
The phase of most intense lava fountaining lasted approximately 25 minutes, from 0240 until 0305 on 24 April, after which the intensity rapidly decreased and returned to Strombolian activity, before ceasing completely around 0340.
(Source: INGV & Smithsonian / USGS Weekly Volcanic Activity Report)
Try our free app!

Kelut volcano photos
A new lava dome grew inside the crater lake during the effusive eruption in late 2007, replacing most of the lake. Watch the birth of a new mountain!
Volcano Calendar 2016

Round-the-world volcano tour
Have you ever dreamt of travelling around the world? VolcanoDiscovery makes this dream come true.
Pilot tours

Exploring the unknown
We sometimes invite you to "test" new itineraries or destinations with us. Such trips are a reduced cost and require a higher degree of flexibility, but often offer a great deal of adventure.
Why is there advertising on this site?