Guagua Pichincha is one of Ecuador's most active volcanoes. The stratovolcano is part of a complex that rises immediately west of the capital Quito, at only 8 km distance from the city center. 3 major explosive eruptions have occurred at Guagua Pichincha in the past 2000 years, the most recent one in 1660. An event of similar size today is a major threat to the ca. 2 million city of Quito.
The volcano and the older extinct Rucu Pichincha stratovolcano form a broad volcanic massif 23 km in diameter. Historical activity of the volcano has included large explosive eruptions some of which produced sub-plinian and plinian eruption columns, lava domes. Guagua Pichincha volcano's eruptions frequently produce dangerous pyroclastic flows.
Following a 100 year long interval of being dormant, Guagua Pichincha volcano has entered a new phase of low seismic, phreatic and magmatic activity in 1981.

from Smithsonian / GVP volcano information:
A lava dome is located at the head of a 6-km-wide breached caldera that formed during a late-Pleistocene slope failure of Guagua Pichincha about 50,000 years ago. Subsequent late-Pleistocene and Holocene eruptions from the central vent in the breached caldera consisted of explosive activity with pyroclastic flows accompanied by periodic growth and destruction of the central lava dome. Many minor eruptions have occurred since the beginning of the Spanish era at Guagua Pichincha, which is one of Ecuador's most active volcanoes. The largest historical eruption took place in 1660, when ash fell over a 1000 km radius, accumulating to 30 cm depth in Quito. Pyroclastic flows and surges also occurred, primarily to the west, and affected agricultural activity, causing great economic losses.


2008 eruptions
7 phreatic eruptions occurred at Guagua Pichincha Volcano on 1 February 2008. The eruptions were preceded by a magnitude 4.1 earthquake on 6 December 2007.


2003 possible eruption
On 17 April 2003, seismic signals were detected that could have accompanied a minor eruption at Guagua Pichincha, but there was no visual confirmation that an eruption happened.


2001 eruption - lava dome growth and ash explosions
Guagua Pichincha's activity in early 2001 consisted principally of gradual lava dome growth. There were ash eruptions on 18, 31 March, and 25 May 2001. The explosion on 25 May produced a ash cloud reaching an altitude of 8.5 km. On 26 November 2001, seismic signals indicated a 20 minute-long phreatic explosion around noon, followed by 16 hours of continuous tremor.


2000 eruptions
During 2000, Guagua Pichincha produced a series of mostly minor ash explosions. A partial collapse of its lava dome which grew in December 199 and January ("dome 8") occurred on 12 July.


1993 eruptions and fatalities
A phreatic explosion at 11h46 local time on 12 March 1993 from Guagua Pichincha's central dome killed 2 young volcanologists. A warning of possible activity had been transmitted to them by radio at 10h30, but for unknown reasons they were still on the lava dome when the eruption occurred.
(source: GVP monthly reports)


1981 reawakening after 100 years of slumber
New activity started in 1981 with phreatic ash explosions and an increase in fumarole activity. This was the first activity after about 100 years of dormancy and started a new cycle of activity.


1660 Plinian eruption of Guagua Pichincha
Quito has been significantly affected several times by eruptions of Guagua Pichincha. The worst of these events occurred in 1660, when as much as 25 cm of ash covered the city. A similar event today, as the its population approaches 2 millions, could spell a major disaster.
The eruption in 1660 began on 28 October 1and lasted for 12 hours. A plinian eruption column developed, reached ca. 25 km altitude and deposited ash and pumice over Quito, which was in a total darkness during the eruption. Pyroclastic flows and surges swept down the flanks of the volcano, but the topographic relief of Rucu Pichincha prevented flows from reaching Quito itself.
The ash fell as far north as Popayan, Columbia (300 km ), and to the south at Loja (430 km ), and to the west it reached the Pacific coast (170 km). Earthquakes during the eruption caused panic in Quito.
There are no reports of fatalities, but the the eruption caused a significant economic downturn to the city and its surrounding region.
Latest satellite images 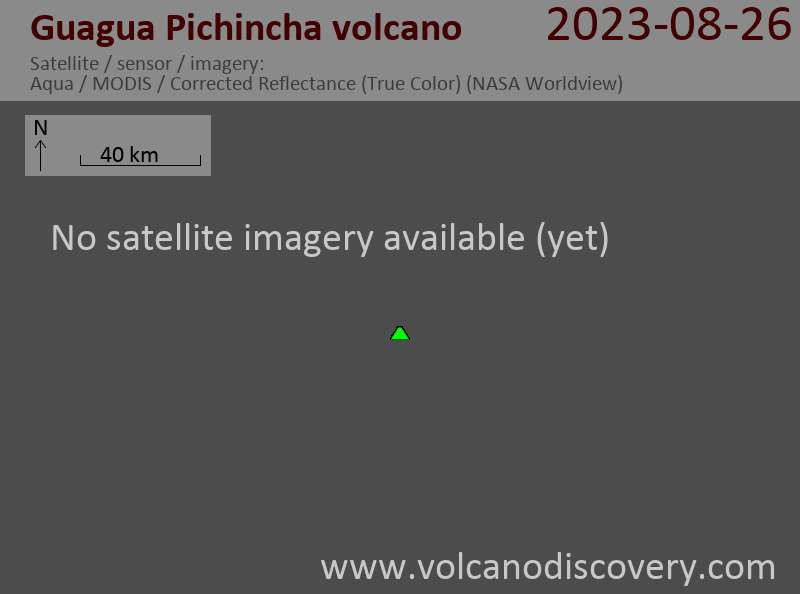 See also: Sentinel hub | Landsat 8 | NASA FIRMS
First visit to our site? If you havn't done it yet, download the Volcanoes & Earthquakes app to get one of the fastest volcano news online:
Android | IOS
Latest news
mié, 8 jun 2016, 06:00

The Washington VAAC reported that on 14 June a possible ash emission from Guagua Pichincha was visible in satellite images drifting NW. Seismicity was elevated. A VAAC report issued about five hours later noted that no further notices of activity had been received. ... Read all
lun, 20 abr 2015, 10:25 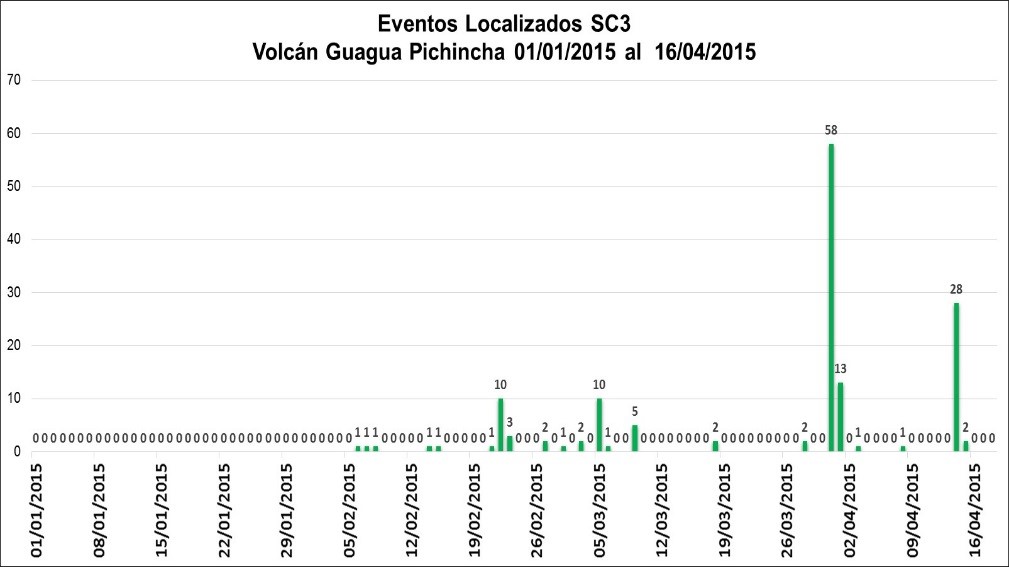 Photos of lava lakes
Quakes near me

Earthquakes by Lat/Lon
Look up recent and past quakes worldwide or by selecting an area on the map!
Kelut lava dome

Kelut volcano's lava dome in 2007
One of the most impressive lava dome eruptions in recent years. A new dome formed in the crater lake of Kelut volcano (East Java) in late 2007. Enjoy some unique pictures.
Nyiragongo

Nyiragongo volcano photos
Nyiragongo (DR Congo) has the world's largest and most active lava lake. Enjoy our pictures taken during several expeditions over the past years.
Volcano Tours

Join our volcano tours worldwide
Why is there advertising on this site?