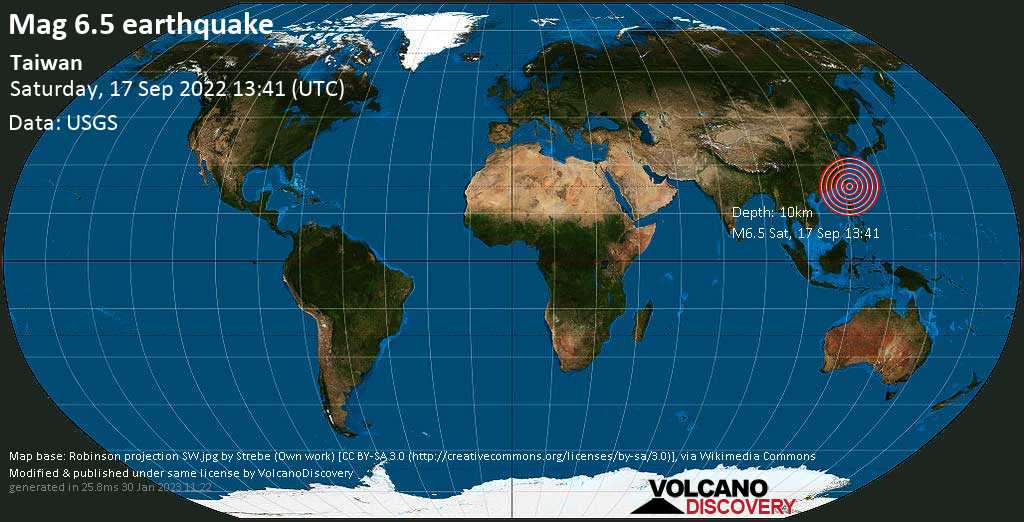 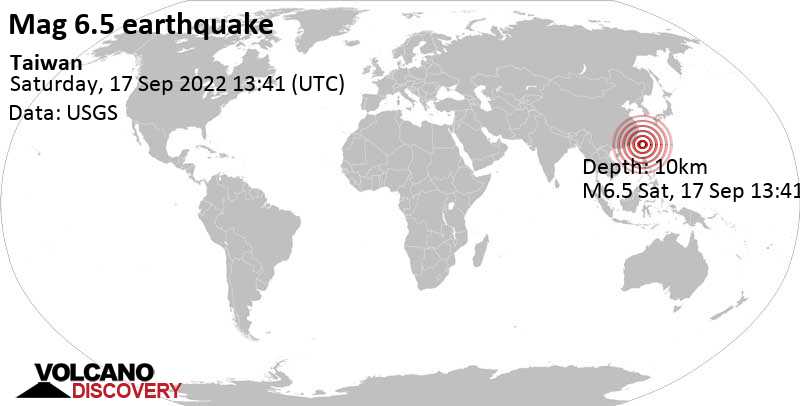 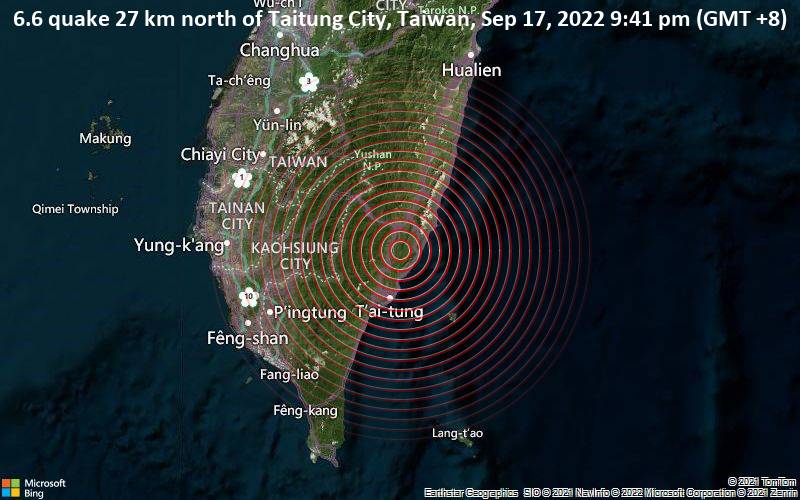 6.6 quake 27 km north of Taitung City, Taiwan, Sep 17, 2022 9:41 pm (GMT +8)
A magnitude 6.6 earthquake near Taitung City, Taiwan, was reported only 16 minutes ago by the United States Geological Survey, considered one of the key international agencies that monitor seismic activity worldwide. The earthquake occurred at a moderately shallow depth of 45 km beneath the epicenter in the evening on Saturday, September 17th, 2022, at 9:41 pm local time. The exact magnitude, epicenter, and depth of the quake might be revised within the next few hours or minutes as seismologists review data and refine their calculations, or as other agencies issue their report.
Our monitoring service identified a second report from the German Research Centre for Geosciences (GFZ) which listed the quake at magnitude 6.6 as well. Other agencies reporting the same quake include Geoscience Australia (GeoAu) at magnitude 6.6, the citizen-seismograph network of RaspberryShake at magnitude 6.6, France's Réseau National de Surveillance Sismique (RéNaSS) at magnitude 6.3, and the European-Mediterranean Seismological Centre (EMSC) at magnitude 6.5.
Generally quakes of this magnitude are recorded by more than one agency and the results can vary, with subsequent reports that come in after the first one often showing more accuracy.
Based on the preliminary seismic data, the quake should have been widely felt by almost everyone in the area of the epicenter. It might have caused light to moderate damage.
Moderate shaking probably occurred in Taitung City (pop. 109,600) located 27 km from the epicenter, and Yujing (pop. 16,600) 77 km away.
In Lugu (pop. 19,600) located 95 km from the epicenter, Donggang (pop. 47,700) 97 km away, Kaohsiung City (pop. 1,519,700) 100 km away, Tainan City (pop. 771,200) 101 km away, Douliu (pop. 104,700) 104 km away, Nantou City (pop. 105,700) 116 km away, and Zhongxing New Village (pop. 25,500) 119 km away, the quake should have been felt as light shaking.
VolcanoDiscovery will automatically update magnitude and depth if these change and follow up if other significant news about the quake become available. If you're in the area, please send us your experience through our reporting mechanism, either online or via our mobile app. This will help us provide more first-hand updates to anyone around the globe who wants to know more about this quake.
Descarga la app de Volcanes y Terremotos y obtén una de las alertas sísmicas más rápidas en línea: Android | iOS
Lo he sentido este temblor
No lo sentí

Info: The more agencies report about the same quake and post similar data, the more confidence you can have in the data. It takes normally up to a few hours until earthquake parameters are calculated with near-optimum precision.
Most recent quakes Top 20 past 24 hrs Sismos en Taiwán Taiwán