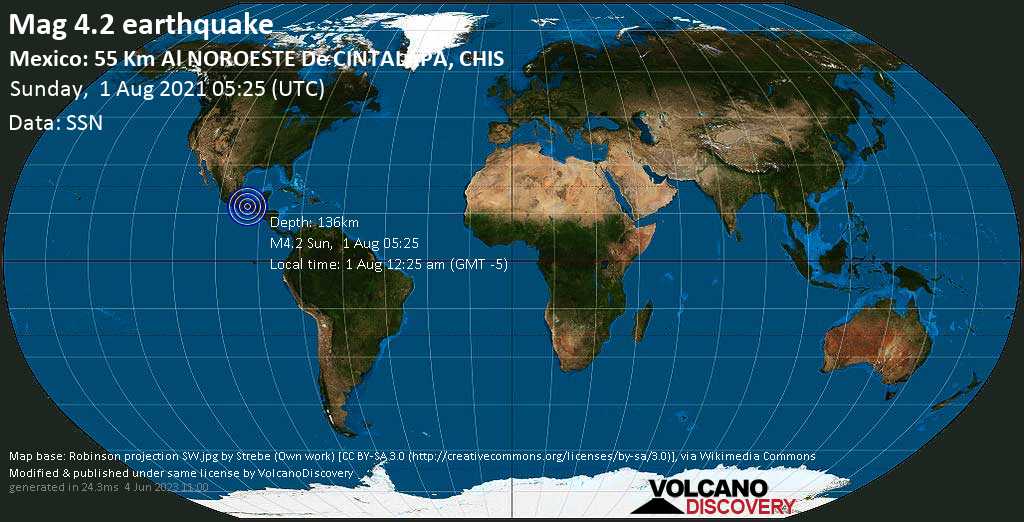 1 Aug 05:49 UTC: Primero en informar: SSN después de 23 minutos.
Update Sun, 1 Aug 2021, 05:54
Magnitude 4.2 earthquake strikes near Cintalapa de Figueroa, Cintalapa, Chiapas, Mexico
4.2 quake 1 Aug 12:25 am (GMT -5)
An intermediate magnitude 4.2 earthquake was reported after midnight near Cintalapa de Figueroa, Cintalapa, Chiapas, Mexico.
According to Mexico's National Seismological Service (SSN), the quake hit on Sunday 1 August 2021 at 12:25 am local time at an intermediate depth of 136 km. The strength of the earthquake may have been tempered by its relative great depth below the surface, which makes it feel weaker in absolute terms. The exact magnitude, epicenter, and depth of the quake might be revised within the next few hours or minutes as seismologists review data and refine their calculations, or as other agencies issue their report.
A second report was later issued by the European-Mediterranean Seismological Centre (EMSC), which listed it as a magnitude 4.2 earthquake as well.
According to preliminary calculations, we do not expect that the quake was felt by many people and did not cause any damage. In Nuevo San Juan (pop. 52, 9 km away), La Horqueta (Poblado Doce) (pop. 1,500, 35 km away), Santo Domingo Zanatepec (pop. 7,200, 49 km away), Cintalapa de Figueroa (pop. 42,500, 56 km away), San Pedro Tapanatepec (pop. 7,400, 59 km away), El Espinal (pop. 7,600, 60 km away), Jiquipilas (pop. 9,900, 63 km away), and Chahuites (pop. 9,800, 67 km away), the quake was probably not felt.
Download the Volcanoes & Earthquakes app and get one of the fastest seismic alerts online:
Android | iOS

16.4°C (62 F), humidity: 97%, wind: 1 m/s (2 kts) from N
Fuente primaria de datos: SSN (Servicio Sismológico Nacional)
Energía liberada estimada: 1.3 x 1011 joules (35 MWh, equivalente a 30.1 toneladas de TNT) Más info
[Mostrar mapa]
Mostrar mapa interactivo
[Reducir] [Agrandar]
If you felt this quake (or if you were near the epicenter), please share your experience and submit a short "I felt it" report! Other users would love to hear about it!
If you did NOT feel the quake although you were in the area, please report it! Your contribution is valuable to earthquake science, seismic hazard analysis and mitigation efforts. You can use your device location or the map to indicate where you were during the earthquake. Thank you!

Info: The more agencies report about the same quake and post similar data, the more confidence you can have in the data. It takes normally up to a few hours until earthquake parameters are calculated with near-optimum precision.
Most recent quakes Top 20 past 24 hrs Sismos en Mexico