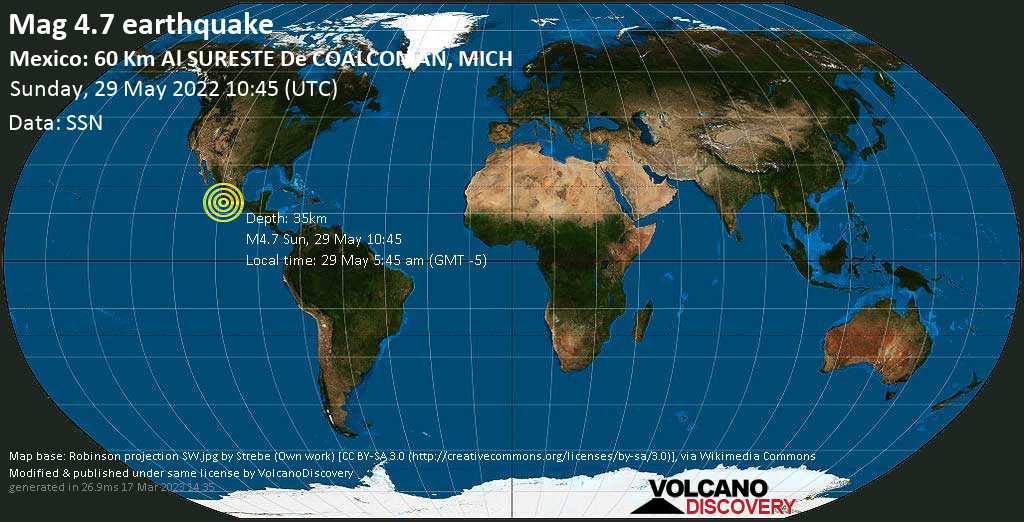 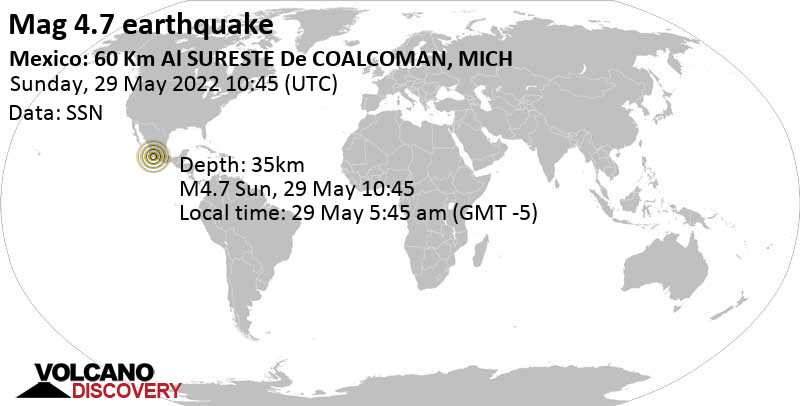 29 May 10:55 UTC: Primero en informar: VolcanoDiscovery después de 11 minutos.
29 May 11:07: Ahora usando una nueva fuente de datos: SSN
Update Sun, 29 May 2022, 11:12
Moderate 4.7 quake hits near Lazaro Cardenas, Lázaro Cárdenas, Michoacan, Mexico
4.7 quake 29 May 5:45 am (GMT -5)
Just 27 minutes ago, a 4.7-magnitude earthquake struck near Lazaro Cardenas, Lázaro Cárdenas, Michoacan, Mexico. The tremor was recorded early morning on Sunday, May 29th, 2022, at 5:45 am local time, at a moderately shallow depth of 35 km below the surface.
The event was filed by Mexico's National Seismological Service (SSN), the first seismological agency to report it.
A second report was later issued by the European-Mediterranean Seismological Centre (EMSC), which listed it as a magnitude 4.5 earthquake. A third agency, the United States Geological Survey, reported the same quake at magnitude 4.5.
Based on the preliminary seismic data, the quake should not have caused any significant damage, but was probably felt by many people as light vibration in the area of the epicenter.
Weak shaking might have been felt in La Coralilla (pop. 29) located 3 km from the epicenter, Aguililla (pop. 8,800) 47 km away, Arteaga (pop. 10,500) 59 km away, Matamoros (pop. 10,800) 60 km away, La Orilla (pop. 20,100) 75 km away, and Las Guacamayas (pop. 38,000) 75 km away.
Other towns or cities near the epicenter where the quake might have been felt as very weak shaking include Lazaro Cardenas (pop. 79,200) located 77 km from the epicenter, and Tepalcatepec (pop. 15,200) 96 km away.
VolcanoDiscovery will automatically update magnitude and depth if these change and follow up if other significant news about the quake become available. If you're in the area, please send us your experience through our reporting mechanism, either online or via our mobile app. This will help us provide more first-hand updates to anyone around the globe who wants to know more about this quake.
Download the Volcanoes & Earthquakes app and get one of the fastest seismic alerts online:
Android | iOS

lo he sentido este terremoto
I didn't feel it