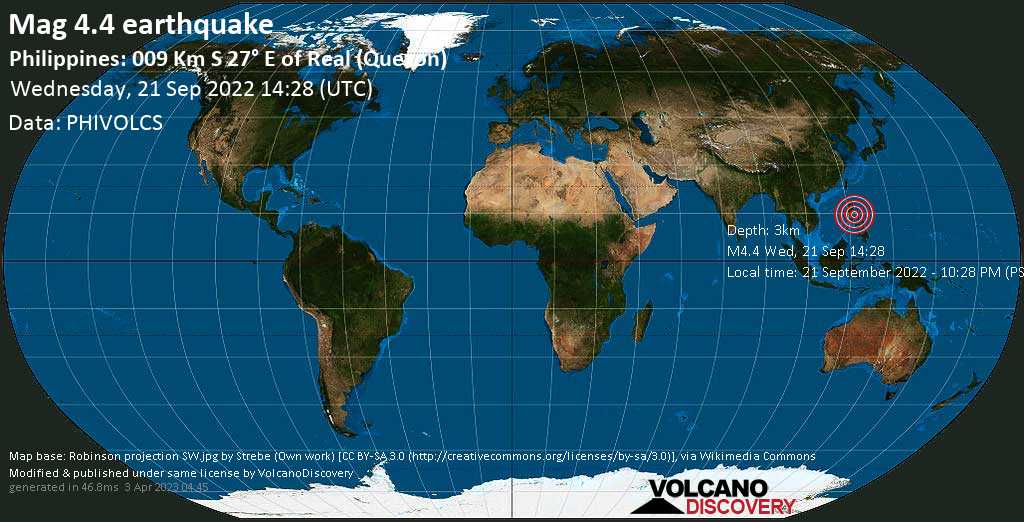 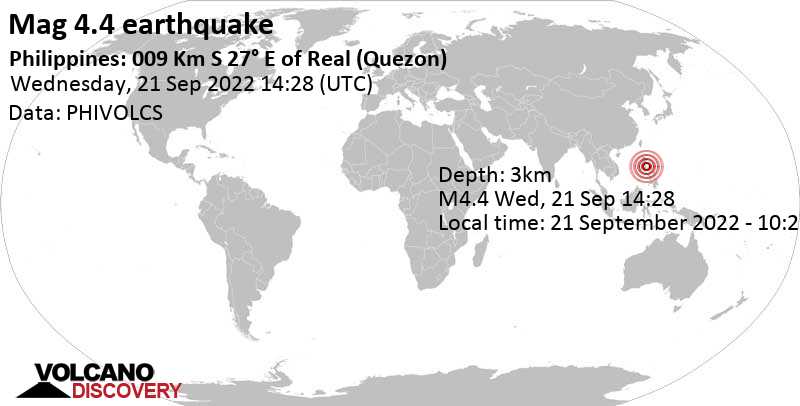 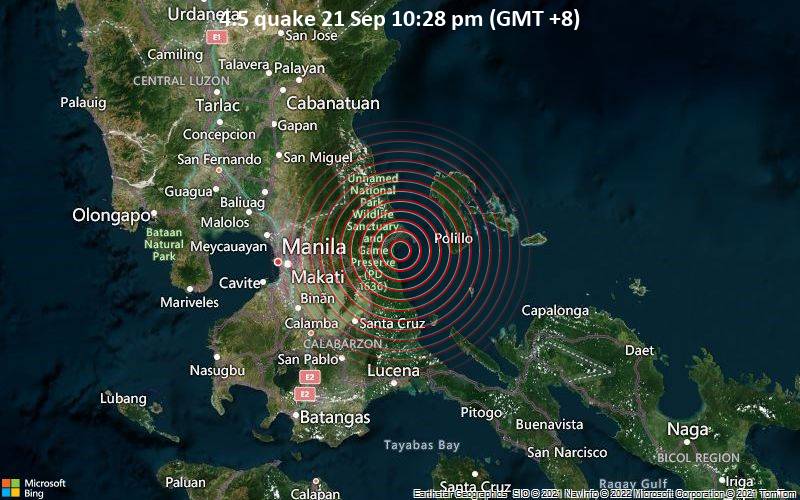 4.5 quake 21 Sep 10:28 pm (GMT +8)
Just 23 minutes ago, a 4.5-magnitude earthquake struck near Santa Cruz, Laguna, Calabarzon, Philippines. The tremor was recorded late at night on Wednesday, September 21st, 2022, at 10:28 pm local time, at a very shallow depth of 5 km below the surface.
The event was filed by the Philippine Institute of Volcanology and Seismology (PHIVOLCS), the first seismological agency to report it.
A second report was later issued by the citizen-seismograph network of RaspberryShake, which listed it as a magnitude 4.5 earthquake as well. A third agency, the European-Mediterranean Seismological Centre (EMSC), reported the same quake at magnitude 4.5.
Based on the preliminary seismic data, the quake was probably felt by many people in the area of the epicenter. It should not have caused significant damage, other than objects falling from shelves, broken windows, etc.
In Puerto Real (pop. 9,200) located 4 km from the epicenter, the quake should have been felt as light shaking.
Weak shaking might have been felt in Paete (pop. 26,900) located 36 km from the epicenter, Pililla (pop. 30,400) 40 km away, Tanay (pop. 60,000) 42 km away, Morong (pop. 49,600) 46 km away, Santa Cruz (pop. 108,100) 48 km away, Rodriguez (pop. 134,400) 49 km away, Binangonan (pop. 219,200) 52 km away, and Quezon City (pop. 2,761,700) 63 km away.
Other towns or cities near the epicenter where the quake might have been felt as very weak shaking include Manila (pop. 1,600,000) located 71 km from the epicenter.
VolcanoDiscovery will automatically update magnitude and depth if these change and follow up if other significant news about the quake become available. If you're in the area, please send us your experience through our reporting mechanism, either online or via our mobile app. This will help us provide more first-hand updates to anyone around the globe who wants to know more about this quake.
Descarga la app de Volcanes y Terremotos y obtén una de las alertas sísmicas más rápidas en línea: Android | iOS
Lo he sentido este temblor
No lo sentí

Info: The more agencies report about the same quake and post similar data, the more confidence you can have in the data. It takes normally up to a few hours until earthquake parameters are calculated with near-optimum precision.
Most recent quakes Top 20 past 24 hrs Sismos en Filipinas

Click here to search our database for earlier earthquakes in the same area since 1900!
Most recent quakes Top 20 past 24 hrs Sismos en Filipinas
Try our free app!