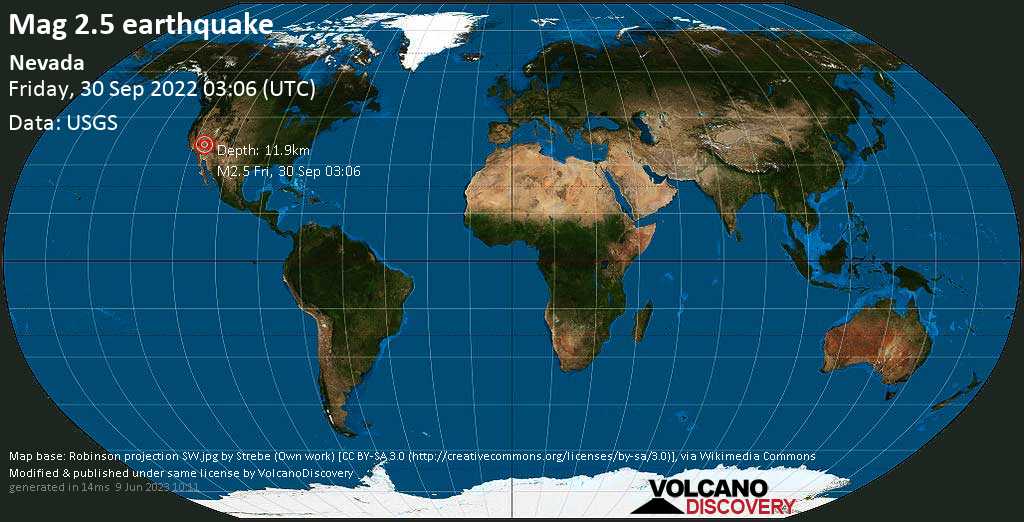 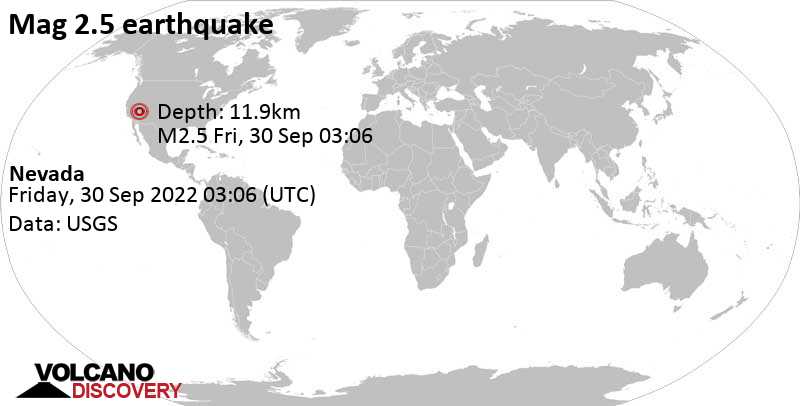 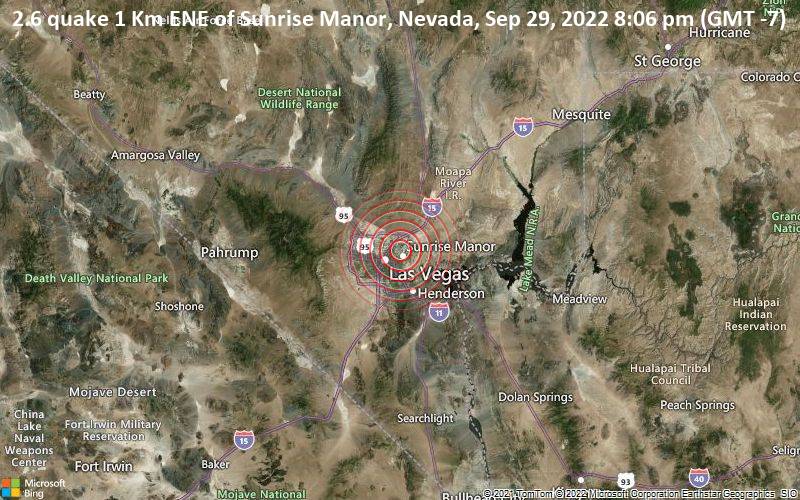 2.6 quake 1 Km ENE of Sunrise Manor, Nevada, Sep 29, 2022 8:06 pm (GMT -7)
The United States Geological Survey reported a magnitude 2.6 quake in the United States near Sunrise Manor, Clark County, Nevada, only 9 minutes ago. The earthquake hit in the evening on Thursday, September 29th, 2022, at 8:06 pm local time at a very shallow depth of miles. The exact magnitude, epicenter, and depth of the quake might be revised within the next few hours or minutes as seismologists review data and refine their calculations, or as other agencies issue their report.
A second report was later issued by the citizen-seismograph network of RaspberryShake, which listed it as a magnitude 2.6 earthquake as well. A third agency, the European-Mediterranean Seismological Centre (EMSC), reported the same quake at magnitude 3.1.
Based on the preliminary seismic data, the quake was probably felt by many people in the area of the epicenter. It should not have caused significant damage, other than objects falling from shelves, broken windows, etc.
In Sunrise Manor (pop. 189,400) located 1 miles from the epicenter, the quake should have been felt as light shaking.
Weak shaking might have been felt in Nellis Air Force Base (pop. 3,200) located 2 miles from the epicenter.
Other towns or cities near the epicenter where the quake might have been felt as very weak shaking include North Las Vegas (pop. 234,800) located 3 miles from the epicenter, Las Vegas (pop. 623,700) 5 miles away, Winchester (pop. 28,000) 7 miles away, Whitney (pop. 38,600) 8 miles away, and Paradise (pop. 223,200) 10 miles away. In Spring Valley (pop. 178,400, 13 miles away), Henderson (pop. 285,700, 13 miles away), and Enterprise (pop. 108,500, 17 miles away), the quake was probably not felt.
Descarga la app de Volcanes y Terremotos y obtén una de las alertas sísmicas más rápidas en línea: Android | iOS
Lo he sentido este temblor
No lo sentí

At magnitude 2.5, this quake might have been felt very close to the epicenter and under calm conditions.
User reports estimate the perceived ground shaking intensity according to the MMI (Modified Mercalli Intensity) scale.
Contribute:
Leave a comment if you find a particular report interesting or want to add to it.
Marcar como inapropiado.
Mark as helpful or interesting.
Send your own user report!
There are no user reports for this quake.