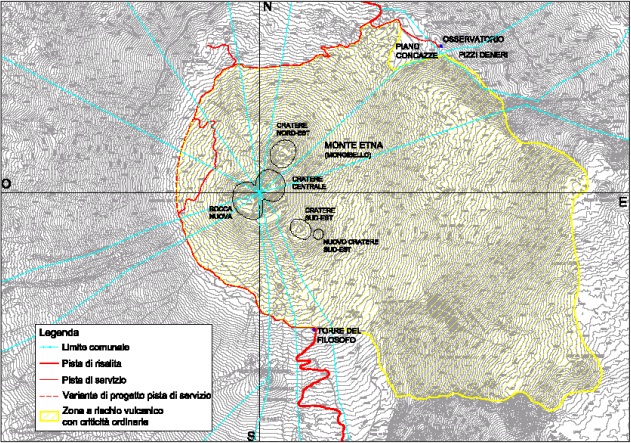 Map of the "Yellow" area of Etna volcano
Starting today, 5 April 2013, the Prefecture of Catania, in accordance with INGV and Etna, published a new set of regulations that define the access to the summit areas of the volcano. The original is found at the following link: www. prefettura.it/FILES/docs/1157/Quote_sommitali-post% 20prefettura_08_02_2013.pdf.

Below are the main points summarized (with no warranty, please refer to the original document and/or Prefecture of Catania for updates/changes/correctness...):

A so-called Yellow Zone was defined as the area including the Summit Craters and proximal areas (see image above).
It comprises the area above the service track (north-south connection) including the summit crater, the area of Torre del Filosofo (2,920 m), the area near the Volcanological Observatory of Pizzi Deneri (2,850 m) and the portion of the escarpment below the Southeast Crater until the Monti Centenari in the Valle del Bove.

Then, 4 different hazard and connected alert levels ("livelli di criticità) related to the varying eruptive activity at any time were defined:

1. No Hazard ("Criticità Assente") : no eruptive activity.
This never applies actually to the "Yellow Zone", because Etna is always in some way or another doing something.

2. Normal ("Criticità Ordinaria") - alert level: NORMAL:
Normal activity at Etna, but absence of major eruptive activity from the summit vents. This consists mainly of degassing and steaming from the summit craters and other vents, and small occasional explosions with pyroclastic products launched only to the immediate vicinity of the vents.

3. Moderate ("Criticità Moderata") - alert level: WARNING:
An eruptive phase is in progress, e.g. lava flows (from the summit craters or other eruptive vents), and / or explosive activity with pyroclastic products launched around the vents, and / or periodic ash emissions with possible formation of plumes, generally not very concentrated, which normally disperse at a short distance from the vents.

4. High ("Criticità Moderata") - alert level: ALARM:
A strong eruptive phase in progress, characterized by lava effusion (from the summit craters or other eruptive vents), and / or intense explosive activity with the launch of pyroclastic products to a considerable distance from the vent, and / or lava fountains, and / or ash emissions with the formation of dense and sustained plumes, and / or formation or propagation of fractures, and / or landslide, and / or pyroclastic flows...
In short, anything a bit more powerful happening will fall into this category!

ALERT LEVEL NORMAL
- Visits are allowed within the "Yellow Zone" (including the summit craters itself and the other limits described above) only if accompanied by authorized personnel (certified mountain guides).

- Free visits, subject the conduct rules of the park, are allowed outside the "yellow zone" only. This is below the limits outlined above: below the connecting road from S to N, no higher than Torre del Filosofo (2920 m), below 2800 m on the north side (below the Piano delle Concazze), and outside the area of the headwall of the Valle del Bove between the SE crater and the Monti Centenarians on the east side.

These restrictions referred to in the preceding paragraph do not apply to:
- security and rescue personnel, the Police, Civil Defence personnel and staff of the Etna Park performing service activities in the area;
- scientific staff that works for the purposes of Civil Protection and research
- mountain guides / volcanological and the staff of CAI authorized by law.

Responsibility of the mountain guide:
The authorized guide accompanying other persons assumes civil and criminal liability and must first inform the persons they accompany of the risks of volcanic nature, as well as other risks involved with the particular places and climatic conditions and refuse to accompany all those who do not auto-declare in writing to be in good physical and psychological condition and not to suffer from diseases and / or cardio-respiratory problems, as well as those who, at his sole discretion, are not adequately equipped for the hike.

ALERT LEVEL WARNING:
- NO visits / excursions are allowed, even if led by qualified personnel, into the "Yellow Zone", ie above 2,920 m altitude above sea level (Torre del Filosofo, Summit craters, Pizzi Deneri etc). Manned checkpoints (!) will be established by the Guardia di Finanza at an altitude of 2,880 m above sea level, along the trail to the crater near the Torre del Philosopher, and by the Corpo Forestale at the intersection between the track for the craters and the path that leads to the Observatory of Pizzi Deneri at altitude 2,790 m above sea level.

- Free excursions are only allowed until the arrival station of the Etna cable car at an altitude of 2,500 m asl in the south and no higher than Monte Pizzillo at 2500 m asl on the north-east side.

Access is allowed, beyond the limits imposed, to journalists and professional photographers equipped with a professional certificate when accompanied by authorized personnel in accordance with law.

- No visit / excursion is allowed under any circumstances to the "Yellow Zone" or otherwise within the summit area.

- Excursions are permitted ONLY within areas that, according to special ordinances issued on a case to case basis, are defined safe. (Big Brother protects you;-)

Access is allowed, beyond the limits imposed, to journalists and professional photographers equipped with a professional certificate when accompanied by authorized personnel in accordance with law.

First visit to our site? If you havn't done it yet, download the Volcanoes & Earthquakes app to get one of the fastest volcano news online:
Android | IOS
Thanks to Etnawalk for the original post in Italian.
Try our free app!

Climbing Stromboli volcano
Stromboli provides one of the most remarkable opportunities to watch volcanic eruptions from close: a natural ridge located 150 m above the active vents. A classic and all-time favorite tour by anyone interested in seeing active volcanoes!
Earthquakes

Gorely volcano photos
Gorely is a young and very active shield volcano in southern Kamchatka. It is one of Kamchatka's easiest volcanoes to climb and offers stunning views into vast craters and the surrounding landscape.
Volcanic ash