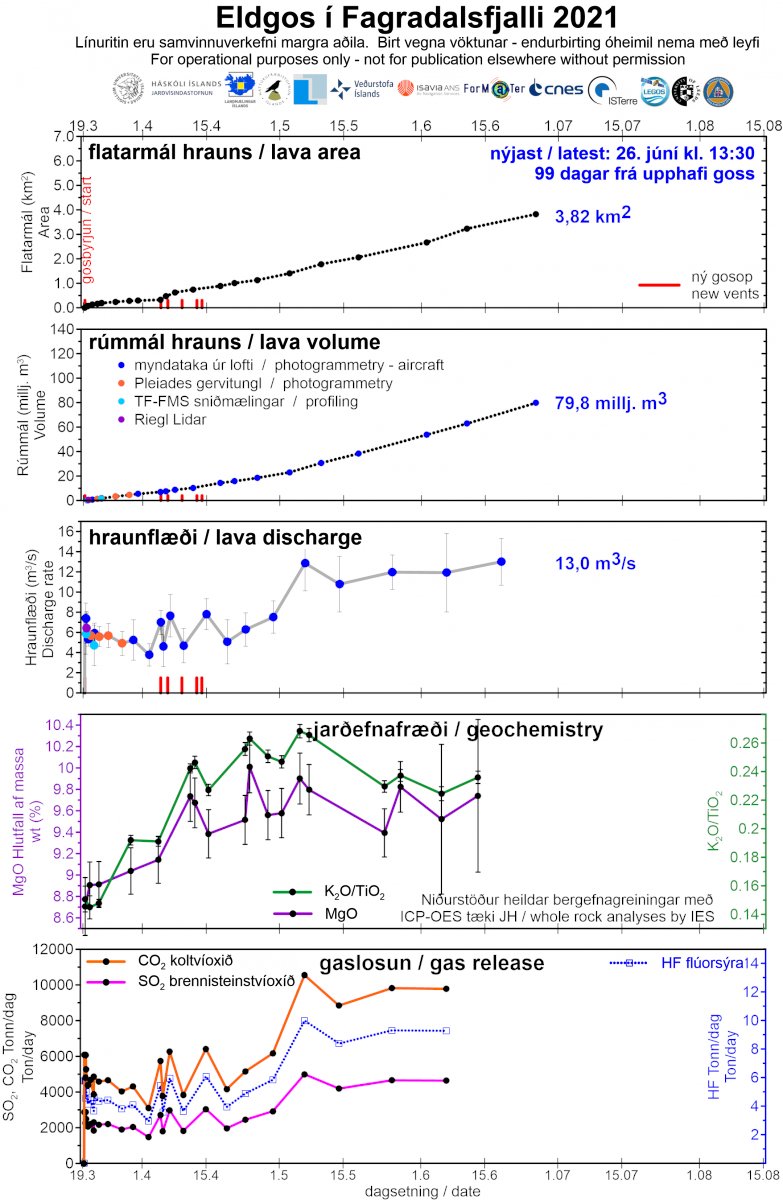 Lava flow volume
Scientists estimate that approximately 80 million cubic meters of the lava have so far erupted from all vents.

The eruption in Fagradalsfjall is in many ways different from eruptions witnessed in recent decades. Most eruptions have originated in magma chambers under main volcanoes, where the pressure in the chamber and its size seem to largely determine the size and length of the eruption.

In Fagradalsfjall, this seems to be protected somewhat differently. It can be seen that the inflow vein and its properties have a great influence on the magma flow. The channel opened was relatively narrow and long (reaching a depth of ~ 17 km) and the carrying capacity was limited. An increase with time indicates that the channel has expanded somewhat over time, probably due to erosion in its walls. It can not be seen that the pressure in the source has decreased significantly and therefore the flow increased when the channel widened. There is currently no way to predict how long the eruption will last or whether lava flows will continue to increase.
Source: University of Iceland's Institute of Earth Sciences volcano activity update 30 June 2021 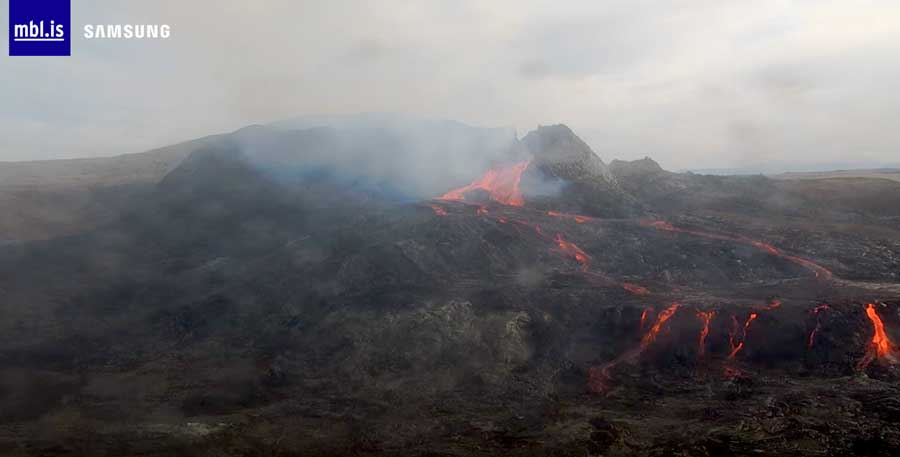 The eruption goes on with no significant changes. Today, long-lasting periods occurred when lava flows were erupted from the main vent onto the immediate surrounding areas, creating beautiful surface flows and adding to the height of the central part of the growing lava shield. Read all
Tue, 15 Jun 2021, 18:19 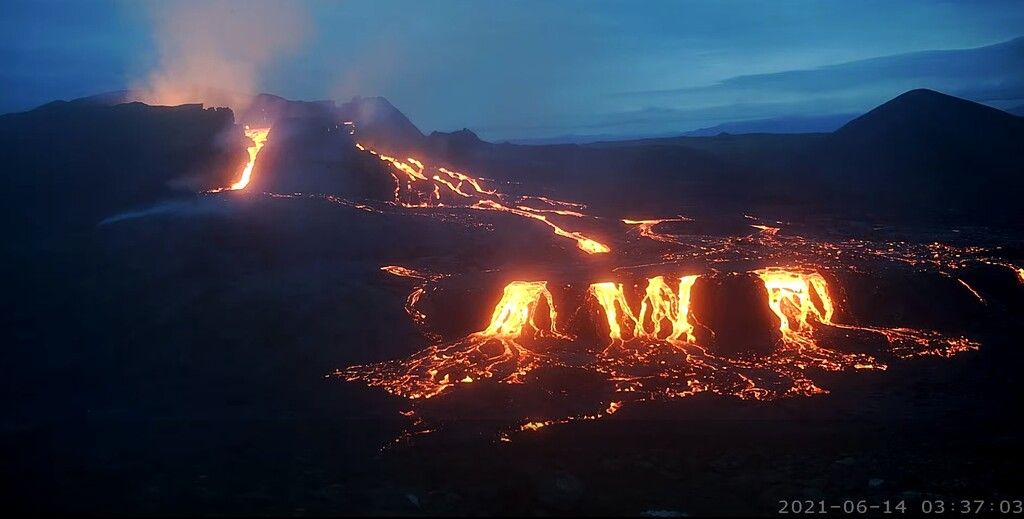 The eruption continues to produce lava flows at constant pace, which gradually both enlarge and thicken the expanding lava flow field. Most of the lava arriving at the vent is going directly into lava tubes that bring it to the active flow margins and contribute to overall inflation of the flow field. ... Read all
Show more
Sun, 13 Jun 2021, 17:18 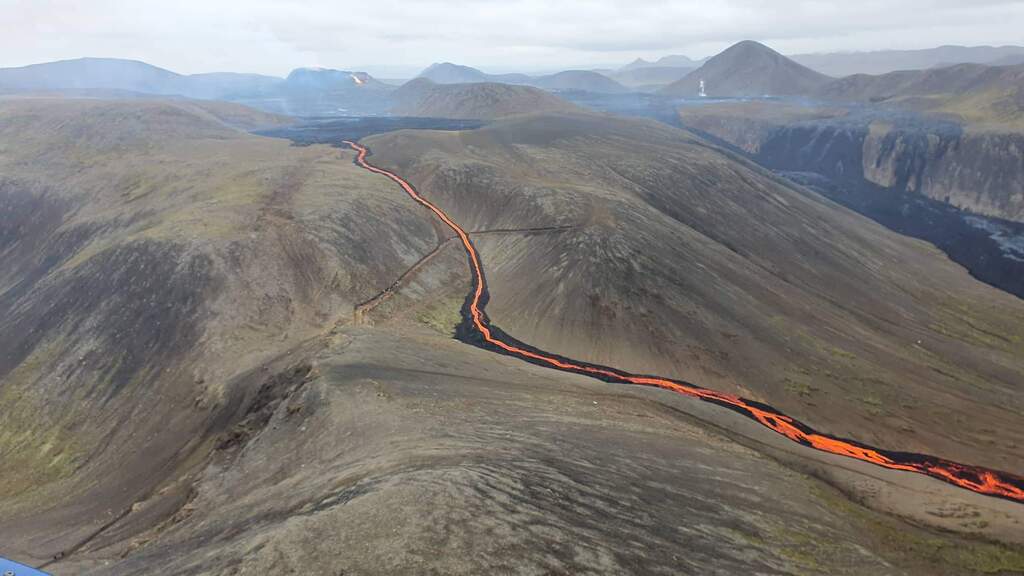 This morning, a lava flow escaped from the Geldingadalir valley at its southern rim, crossed the hiking trail A (which was leading to the observation hills southeast of the active cone), and made its way to the already existing lava flow field in the Nátthagi valley to the SE. ... Read all
Sat, 12 Jun 2021, 13:20 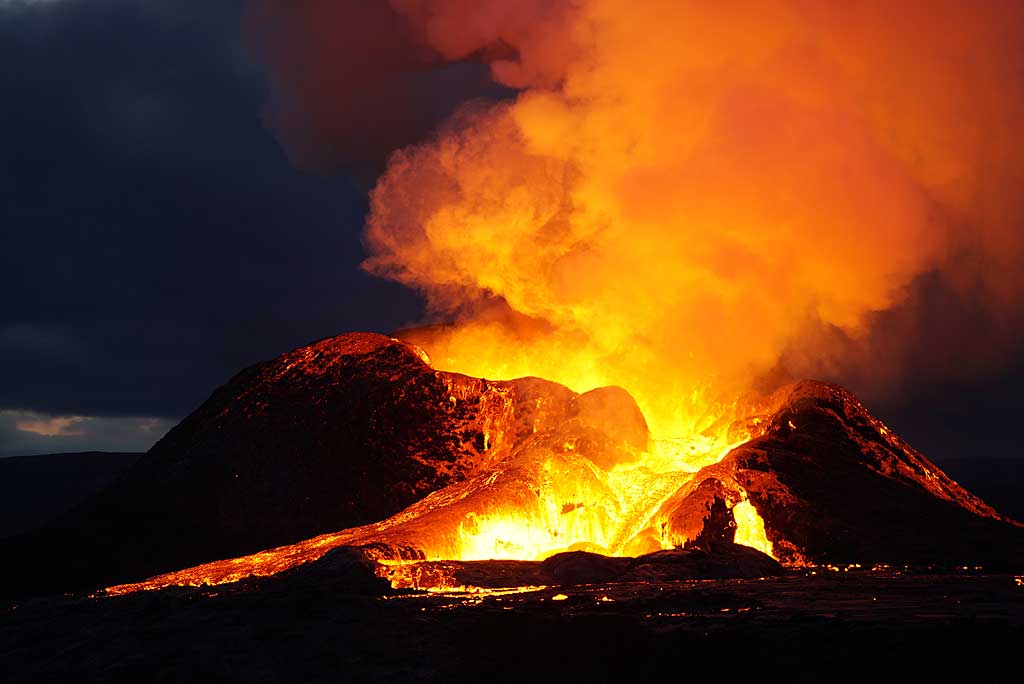 On this page, we present a small selection of videos which we find interesting, particularly beautiful or useful to help understand volcanic activity presented during what is quickly becoming probably the most remarkable eruption of the century so far ... Read all
Show more
Sat, 12 Jun 2021, 12:49 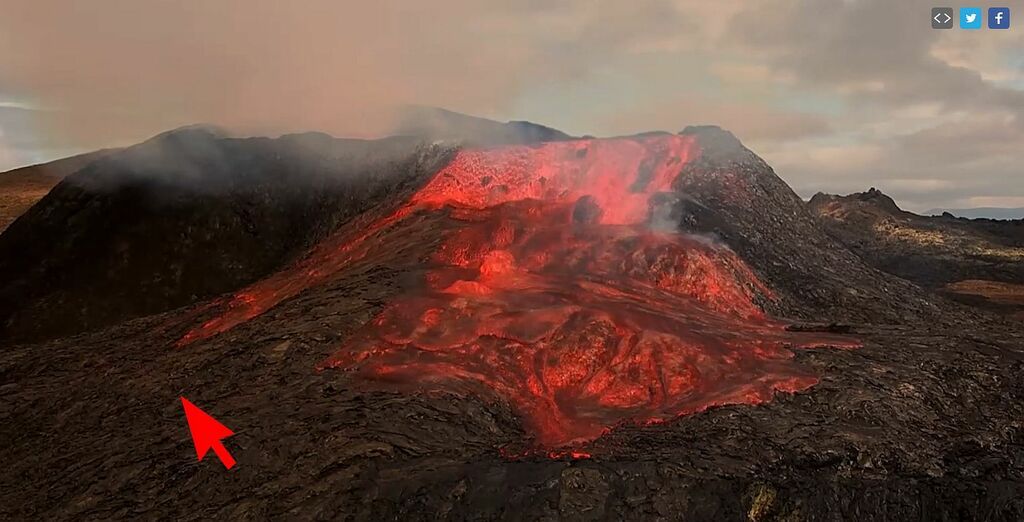 A visitor to the main eruption site in Geldingadalir narrowly escaped a self-provoked catastrophe and cruel death by lava flow. Yesterday (11 June 2021) around noon, a person could be seen on the webcam approaching and presumably attempting to climb the side of the active cone, when a large surge of lava erupted from it and started to rapidly flow downhill towards him or her. ... Read all
Fri, 11 Jun 2021, 07:41

Our friend Ronny from Belgium just returned from Iceland. We present a small selection of his great video clips and photographs taken during 26 May-3 June 2021: Read all
Show more
Thu, 3 Jun 2021, 19:16 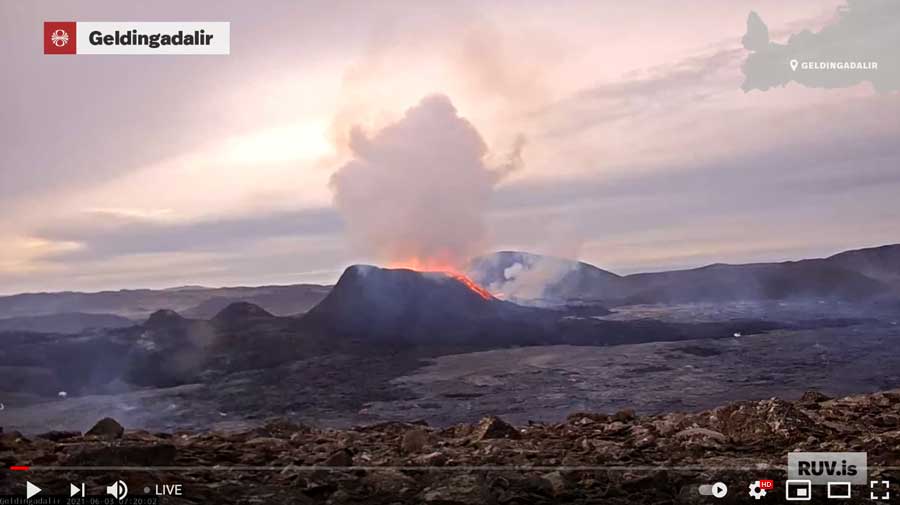 The eruption goes on with little changes overall, but lava effusion rate has increased to approx. 12.4 cubic meters per second. The activity, however, has remained almost entirely effusive with no more lava fountains from the vents during the past 24 hours. ... Read all
Tue, 1 Jun 2021, 14:52

The eruption continues without significant changes, although overall, its intensity seemed to have been decreasing during the past week. ... Read all
Show more
Sun, 23 May 2021, 18:27 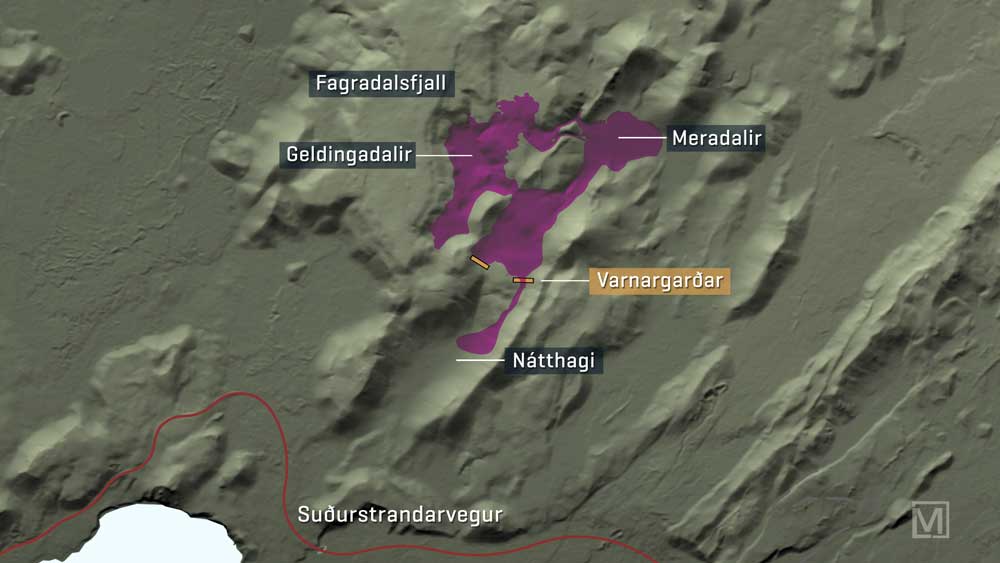 After the lava overtook the artificial dam that had been quickly built in a (failed) attempt to prevent the lava from entering the Natthagi valley, it entered the valley which is leading towards the southern ring road. As it descended the northern headwall of the valley, it created a beautiful lava fall, then formed a new flow along the bottom of the valley and actually following and covering the hiking path leading from the parking at the ring road northwards to the eruption area. ... Read all
Sat, 22 May 2021, 23:51 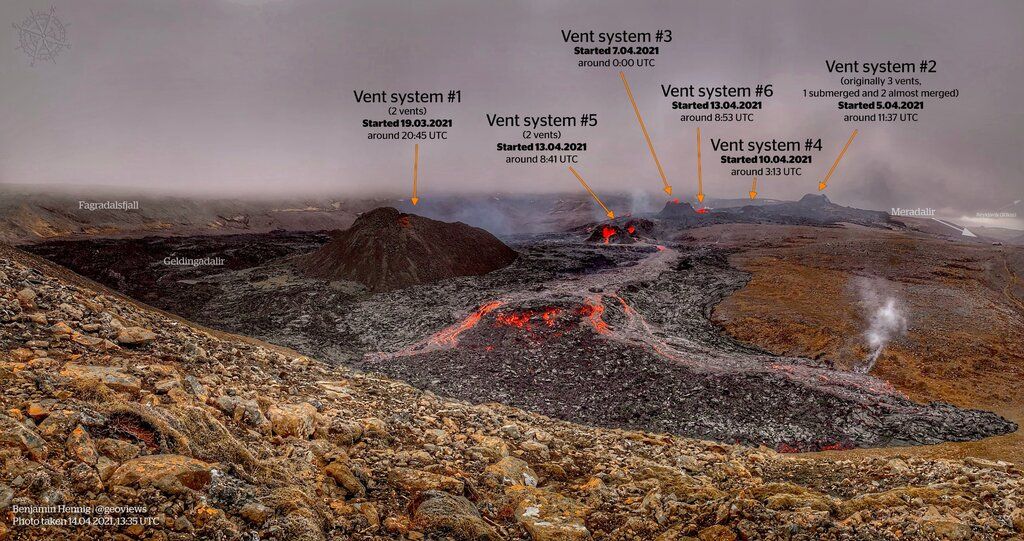 Colors of Iceland
Discover Iceland's fascinating geology and volcanic activity on this relaxed photo and geo tour! Get to see the new volcanic eruption on the Reykjanes peninsula from close!
Greece

Photos from Greece
We have traveled all over Greece, in particular on its active volcanic areas such as Santorini, Nisyros, Milos, Methana.
Peru
5-16 June 2021

Best tours to see lava
Visiting an erupting volcano is an unforgettable experience. If you're particularly looking to see "Red Hot Lava", these are among the best places to go to.
La Palma updates

Volcanic eruption Sep 2021
Follow the new volcanic eruption on La Palma Island, the first since 1971! We collect infos, links and news latest always on top.
Get the ad-free version!
Why is there advertising on this site?