Which is the world's largest volcano?

The largest volcano on earth is Mauna Loa on Hawai'i Big Island. It is a massive shieldvolcano constructed by countless lava flows. When measured from the base to the top, the pile of lavas measures more than 17,000 m (56,000 ft)!

When measured from the sea floor, Mauna Loa's height is still more than 9,000 m, thus it is also the highest mountain on earth. Mauna Loa in fact is so heavy, that its weight has bent the oceanic crust under the volcano several kilometers downwards into the mantle.

Mauna Loa is one of the Earth's most active volcanoes, with 33 well-documented eruptions in historic times since 1843. Its last eruption was in 1984 and since 2004, Mauna Loa is showing increasing signs of a possible awakening in a not-too-distant future. 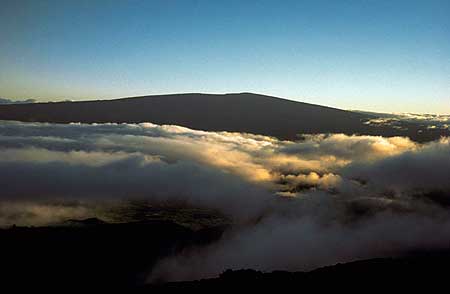 Volcano Trekking
A physically active tour to visit and climb some of Indonesia's most active and famous volcanoes: Papandayan and Galunggung in West Java, Merapi in Central Java, Kelud, Semeru, Bromo, the Tengger caldera, and Ijen in East Java.
Eyjafjallajökull

Eyjafjallajökull volcano photos
The volcano in Iceland with the unpronounceable name... but famous in 2010 when its ash clouds drifted over Europe and forced a unprecedented large-scale airspace closure for several days, stranding millions of passengers.
Bromo

Bromo volcano photos
Bromo is one of Indonesia's most visited volcanoes. It is the most active vent inside the huge Tengger caldera and erupts every few years.
VAAC

Private geology tour on Santorini
We offer you private geology tours to get to know the extraordinary geology and natural history of the island, but also aspects of the deep connection with its cultural history and archaeology.
Get the ad-free version!
Why is there advertising on this site?
Sources: VolcanoDiscovery / VolcanoAdventures and other sources as noted.
Use of material: Most text and images on our websites are owned by us. Re-use is generally not permitted without authorization. Contact us for licensing rights.
Volcanoes & Earthquakes