The lava flow at Fogo between Monte Beco and Monte Saia cones on 21 Jan (OVCV)
Mild intermittent explosive activity continues at the volcano accompanied by effusive activity. A new lava flow, smaller than the ones in the first weeks, but still well alimented, has been active in the Cha caldera over the past days and advanced slowly approx. 1500 m west-southwest passing between Monte Beco and Monte Saia cones. 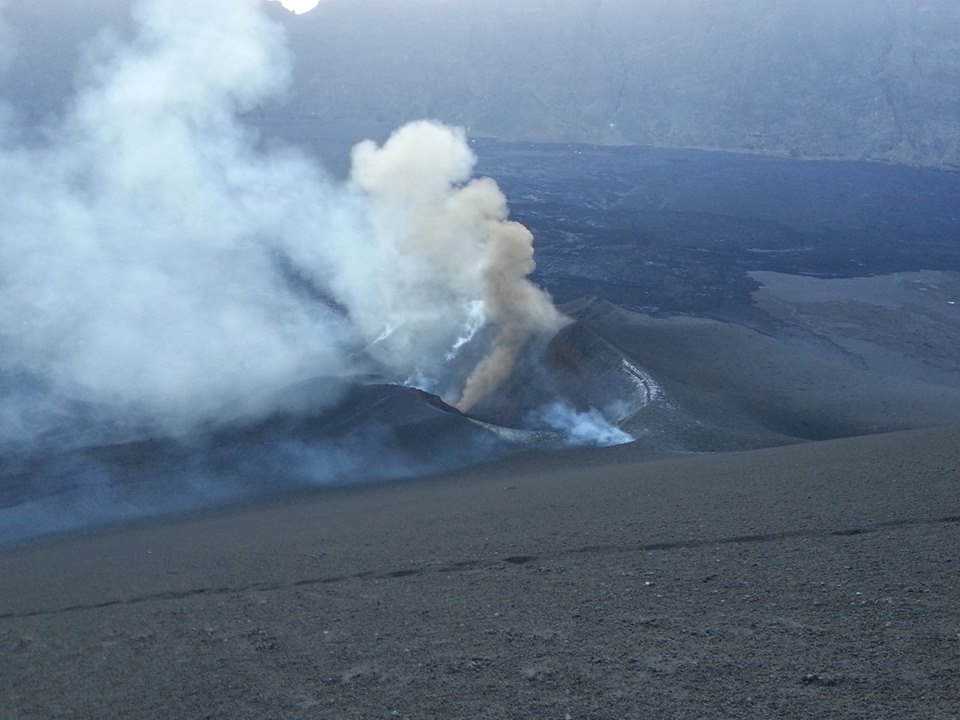 Ash emission at Fogo on 25 Jan (OVCV)
The eruption still continues although most of the time visible activity is very low and restricted to degassing. Minor lava effusion and sporadic flares of strombolian activity of mild to moderate size occur from time to time. Read all
Fogo volcano (Cape Verde): intermittent explosions, eruption declining
Fri, 23 Jan 2015, 09:36 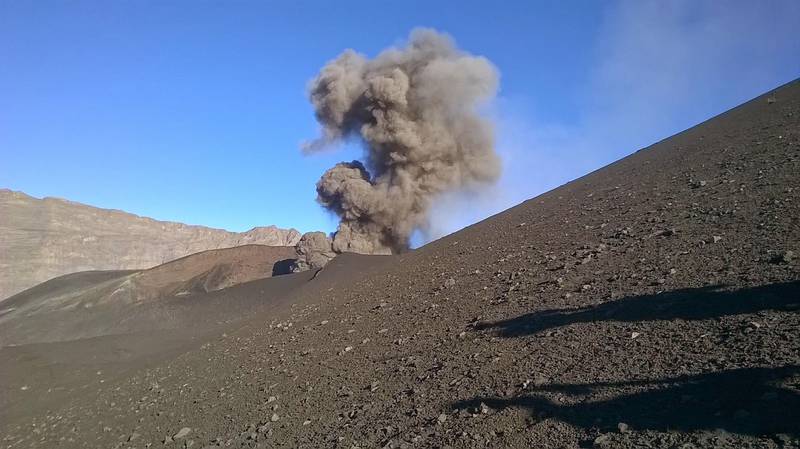 Mild strombolian explosion from Fogo on 21 Jan (image: OVCV)
Mild explosive activity continues from the vent, at least intermittently, but there is no longer significant lava effusion. According to local observers, the eruption continues to decline overall and might be ending in a near future. Read all
to top
Fogo volcano (Cape Verde): eruption seems to be ending
Mon, 12 Jan 2015, 11:41
The eruption seems to be coming to an end. There are no new reports of lava effusion or explosive activity at the vents since 8 January, when small strombolian explosions could still be observed. Read all
Fogo volcano (Cape Verde): eruption slows down with short-lived phases of more vigorous activity
Wed, 7 Jan 2015, 13:10
Activity continues, but overall the eruption has been decreasing and seems slowly to be coming to an end. Read all
Fogo volcano (Cape Verde): eruption continues into 2015
Sat, 3 Jan 2015, 11:10 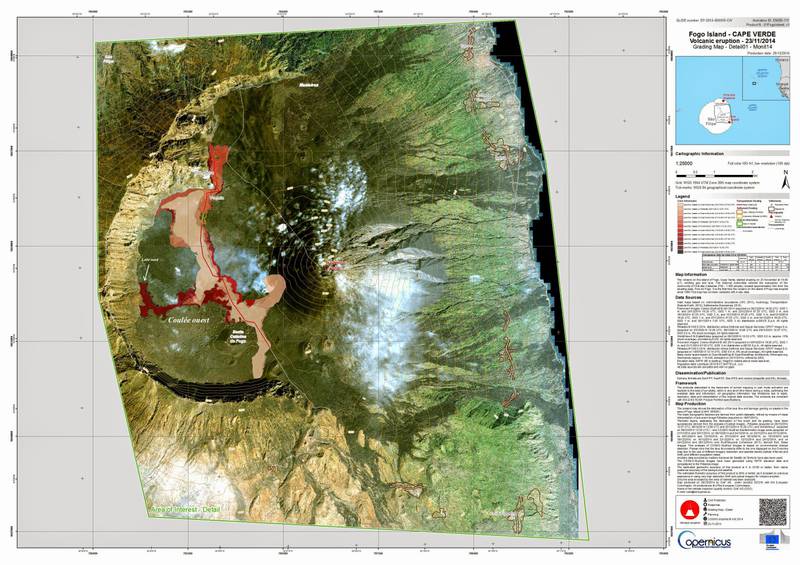 The eruption of Fogo volcano and the 3 lava flows (North, South and West), and the location of the destroyed settlements. (Images: Theo Montrond via Involcan / editing and annotations: Culture Volcan)
According to local press, volcanologist João Fonseca, responsible for volcanic monitoring and equipment maintenance at Fogo volcano, mentioned that volcanic activity shows signs of decreasing and that the eruption could be approaching its end. Read all
to top
Fogo volcano (Cape Verde): lava flows continue to spread over farmland in Cha caldera
Thu, 25 Dec 2014, 11:50 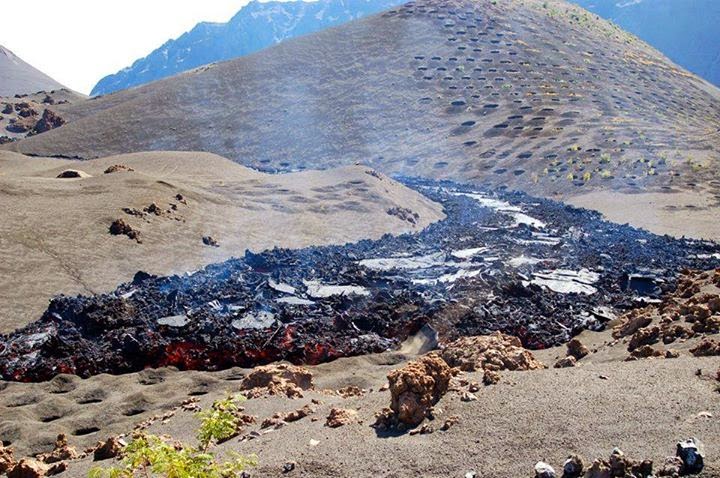 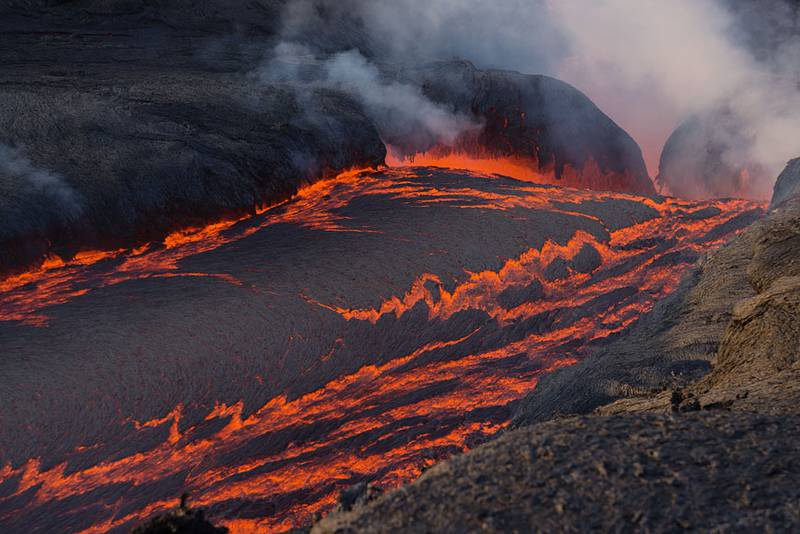 Lava cascade during the Fogo eruption (Dec 2014) (copyright: Martin Rietze)
It seems that after a short period of quietening down (9-14 December) the Fogo eruption has regained its strength. This confirms our earlier report of increased emission of sulphur dioxide thought to indicate the rise of a new magma batch. Read all
Fogo volcano (Cape Verde): activity wanes, eruption could be ending soon
Mon, 15 Dec 2014, 09:13 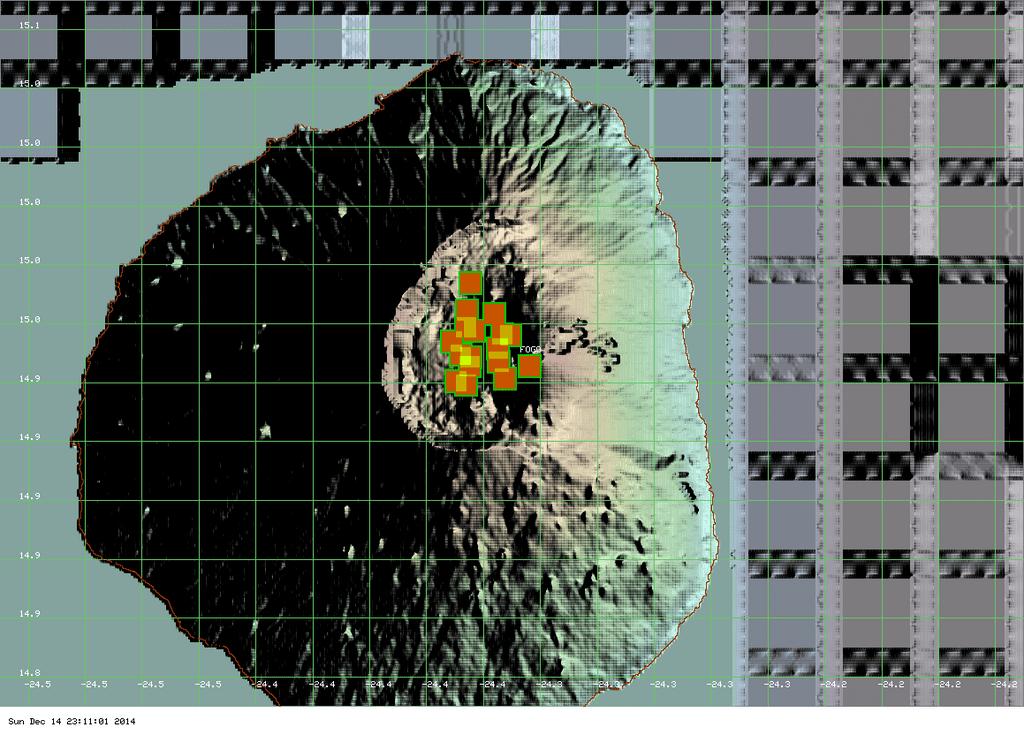 MODIS hot spots at Fogo volcano during the past 2 days - note the strong decrease compared to the image for the past 7 days(MODVOLC, Univ. Hawaii)
Lava emission has slowed down a lot, sign the eruption could be over soon. Read all
to top
Fogo volcano (Cape Verde) update: eruption continues, slowed lava advance
Fri, 12 Dec 2014, 14:46 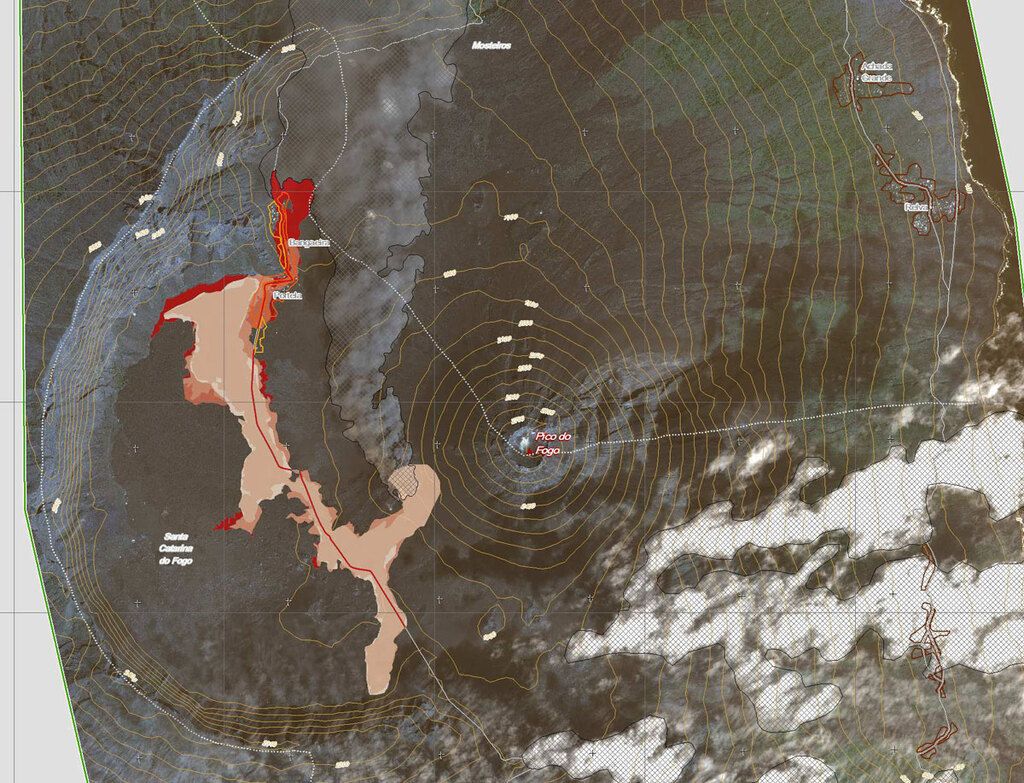 Map of Fogo's lava flow as of 10 Dec 2014 (Copernicus)
Volcanic activity continues, but the advance of the lava flows has slowed down to approx. 5 meters per hour and it seems that the effusion rate has diminished. Read all
Fogo volcano (Cape Verde): 2 villages destroyed, 1700 people displaced - among worst volcanic disasters in 21st century
Mon, 8 Dec 2014, 15:52 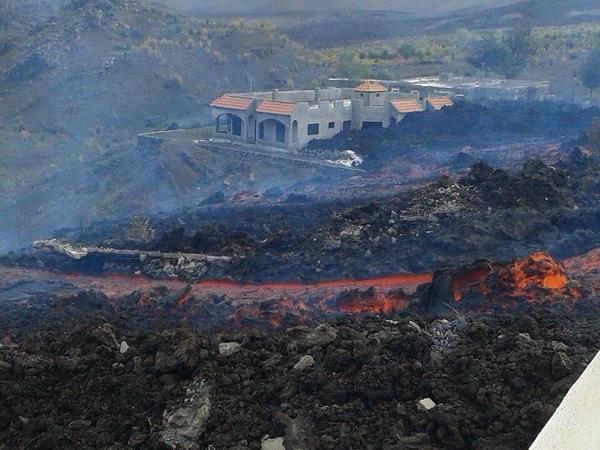 The lava flow of Fogo passing near a destroyed building (image: INVOLCAN / @involcan / twitter)
The second village Bangaeira in the path of the rapidly advancing lava flow has been destroyed within only a few hours. Read all
Fogo volcano (Cape Verde): new lava flow reaches Bangaeira village
Mon, 8 Dec 2014, 09:22 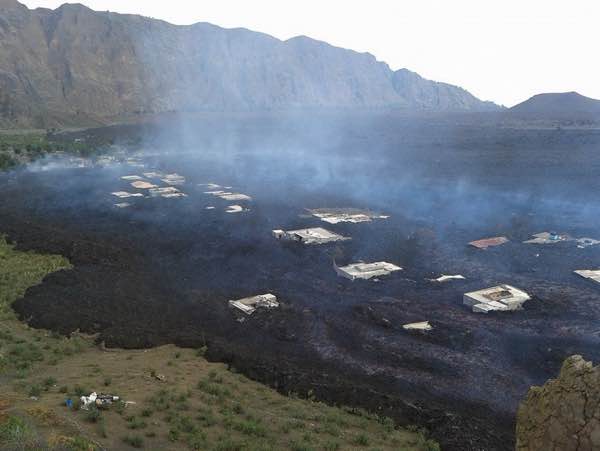 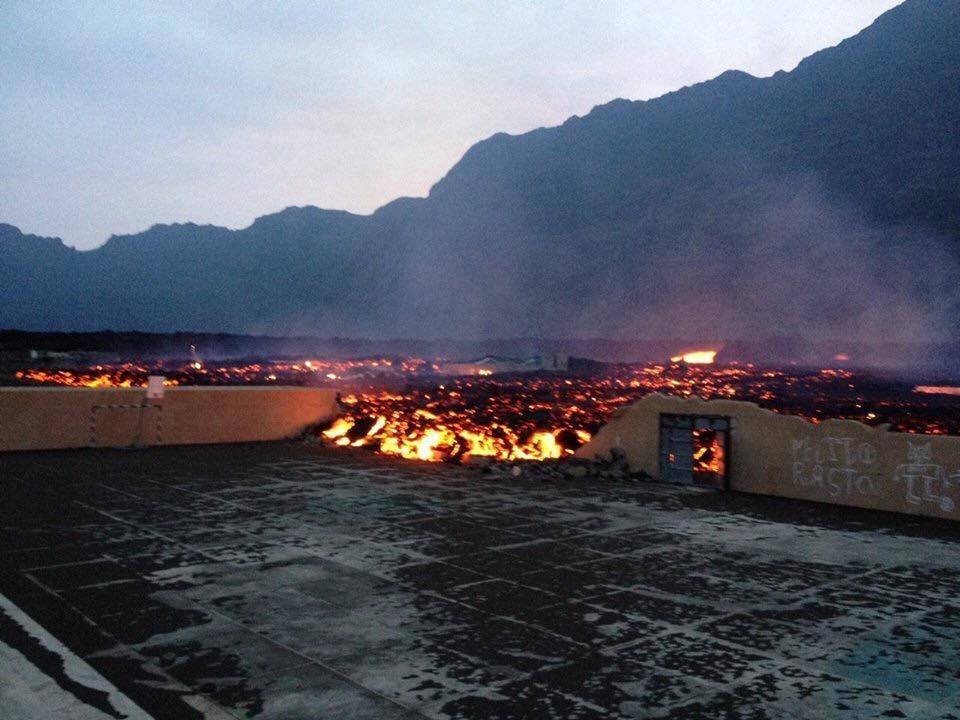 Lava flow from Fogo in Portela (Asociación Canaria de Volcanología / facebook)
The eruption intensified according to news reports on Saturday, and destroyed most of what still had been left of Portela. The new lava flow advanced at 30 meters per hour and consumed another 20 houses and the sports center. Read all
to top
Fogo volcano (Cape Verde): new lava flow heading towards Portela
Fri, 5 Dec 2014, 15:56 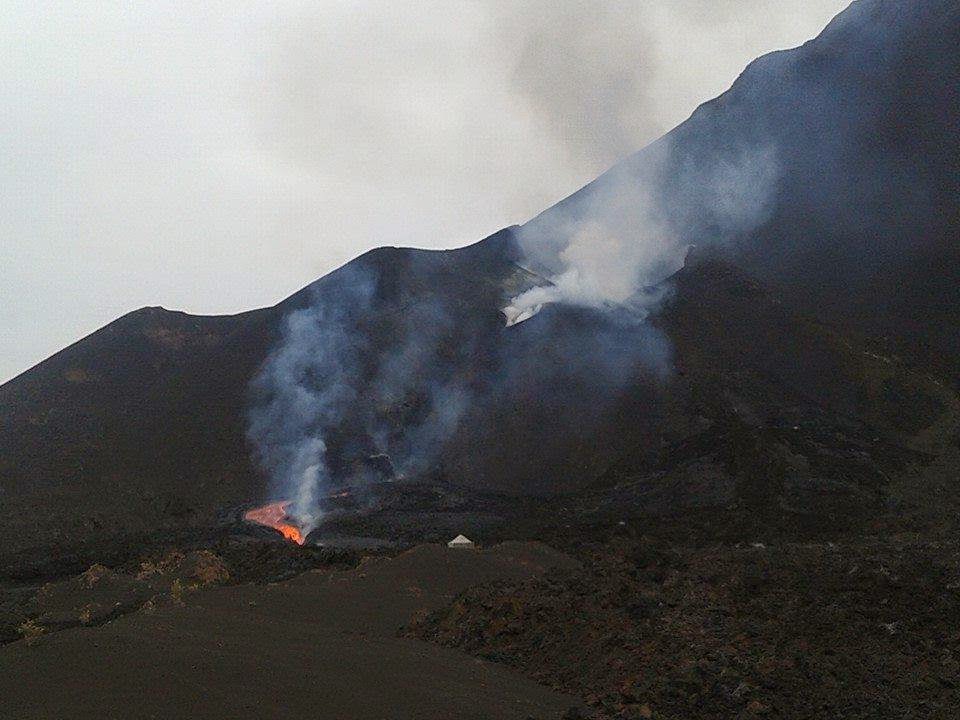 The vents at Fogo volcano and the new lava flow near its source (image: GeoVol)
The eruption continues. A new lava flow that appeared last night is heading again towards the village of Portela, which it might hit in less than 2 days. Read all
Fogo volcano (Cape Verde): eruption decreases
Thu, 4 Dec 2014, 19:46 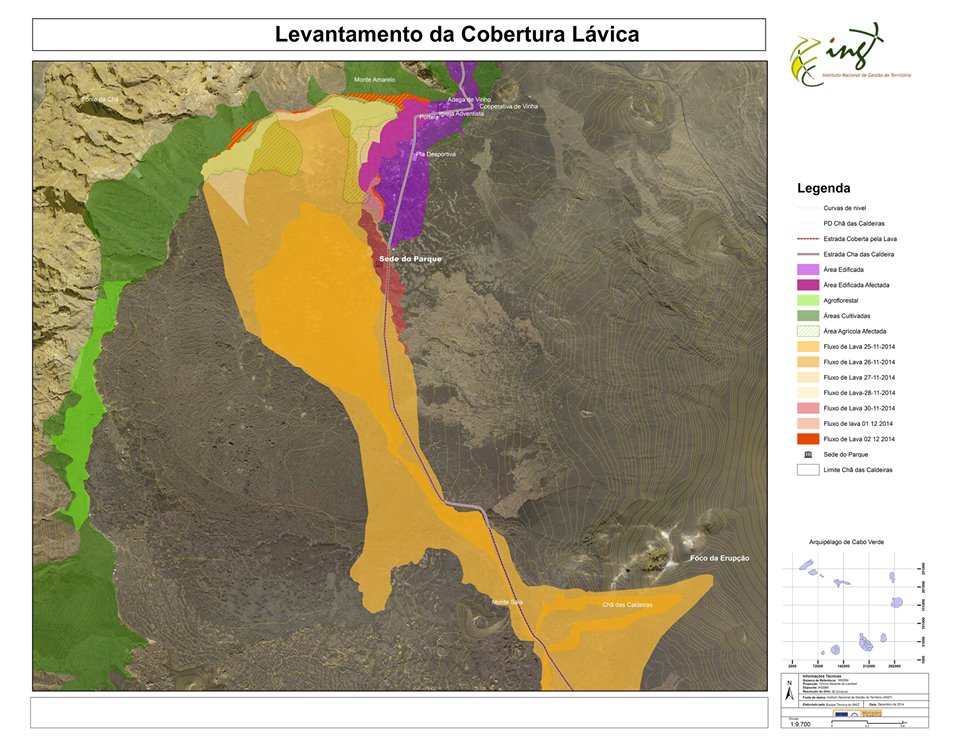 Map of the lava flow field (2 Dec, source: INGT / facebook)
The intensity of the eruption has strongly decreased, and the lava flows that have been destroying Portela seems to have at least temporarily stopped.
Fogo volcano (Cape Verde) eruption update: lava flows slow down
Wed, 3 Dec 2014, 17:31 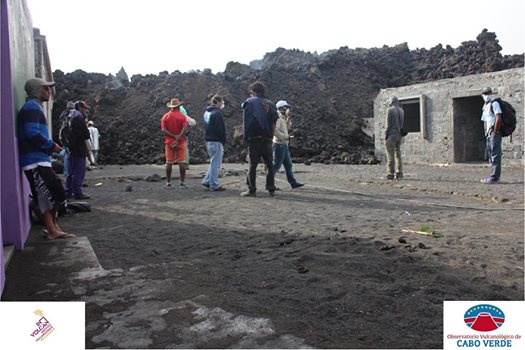 Lava flow in Portela village 3 Dec
The eruption continues. Lava flows have slowed down their advance to less than 1 m per hour, giving some time to breath for what is left at Portela village in Chã das Caldeiras. Read all
Fogo volcano (Cape Verde) eruption update: lava continues to destroy houses in Portela
Tue, 2 Dec 2014, 15:26 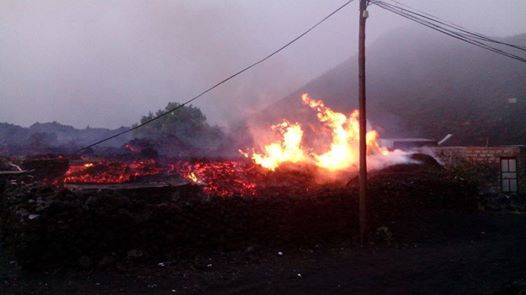 Destruction of houses in Portela this morning. (Fogo News)
Activity remained similar to the previous days although some sources suggest a decrease in lava effusion, but an increase in explosions at the vents. Read all
to top
Show more
Fogo volcano (Cape Verde) eruption update: lava flows pick up, threaten Portela village
Sun, 30 Nov 2014, 15:22 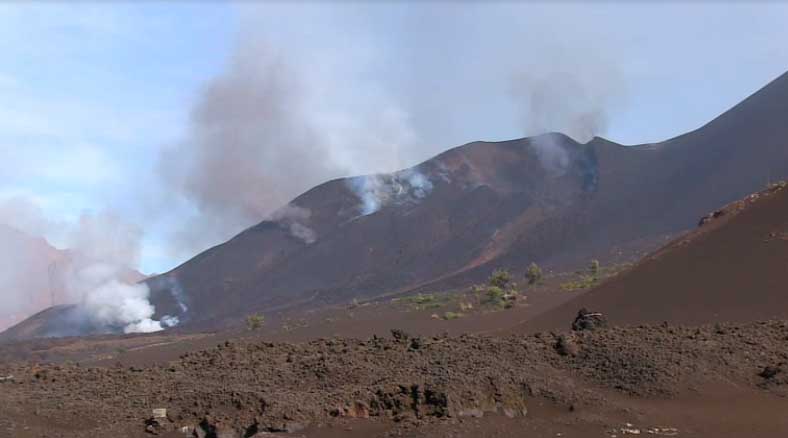 The eruptive vents at Fogo this morning (MuzikaTV)
Although explosive activity has decreased at the vents, it seems that lava effusion picked up. The advance of some of the lava flow fronts in Portela village picked up again this morning, reaching 20 meters per hour. Local sources mention that seismic activity also increased. Read all
Fogo volcano (Cape Verde) eruption update: second vent, lava advances through Portela village
Fri, 28 Nov 2014, 15:23 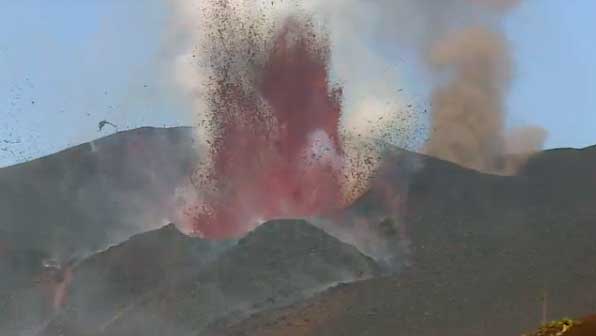 Explosive activity at the eruptive vents of Fogo on 25 Nov 2014 (MuzikaTV)
The eruption continues, but the situation is critical inside the Cha caldera. The northern lava flow branch has started to enter the village of Portela and today destroyed and/or damaged several buildings, including the headquarters of the Fogo Nature Park. Read all
Fogo volcano (Cape Verde) activity update
Tue, 25 Nov 2014, 16:14 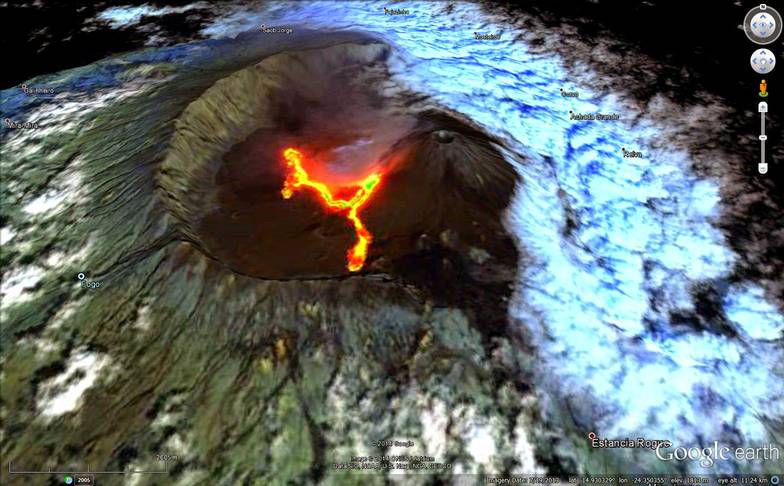 Lava flows at Fogo (credit: Landsat image on Google Earth / Peter Webley)
The eruption continues with little changes. Lava fountaining from the new vents feeds two main lava flows inside the Cha caldera, one to the south, the other to the north. Read all
to top
Fogo volcano (Cape Verde): New video of ongoing eruption
Mon, 24 Nov 2014, 23:24
The recent eruption of the Pico do Fogo continues to produce lava fountains from two vents on the volcano's flank. The erupted lava collects in rapidly growing flows that destroy roads and houses near the caldera, as shown in the new BBC footage below. Read all
Fogo volcano (Cape Verde) eruption update - lava flows cut road
Mon, 24 Nov 2014, 11:59 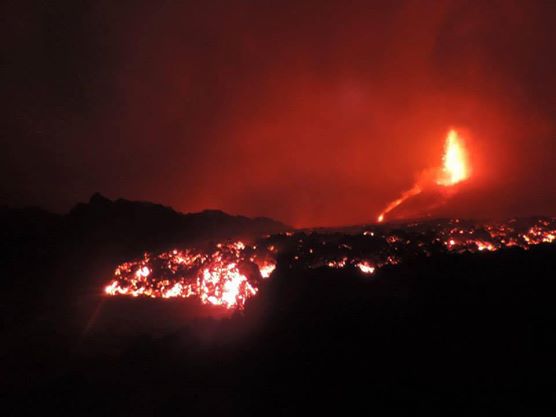 Lava fountains and flow from the new eruption at Fogo (Fogonews)
The new eruption, so far small inside the Cha caldera, continues. It is taking place from a fissure with two closely spaced vents on the southwest side of the Pico de Fogo, very near to the 1995 eruption vents. Read all
Fogo volcano (Cape Verde): new eruption
Sun, 23 Nov 2014, 17:34
A new eruption started at the volcano this morning around 10:00 local time. The aviation alert was raised to red due to possible ash emissions that could harm aircraft in the area. Read all
First visit to our site? If you havn't done it yet, download the Volcanoes & Earthquakes app to get one of the fastest volcano news online:
Android | IOS

Tours to erupting volcanoes
From time to time, we organize special tours to see volcanoes in eruption. These are often announced only few days or weeks in advance. Find out more!
Volcanic ash

The term for all fine-grained volcanic products fragmented during explosive eruptions.
Walking Tours

Walking & Study tours
VolcanoDiscovery's signature tours for small groups: Discover volcanoes and volcanic areas from close with an expert in their field! These tours have a broad mix of activities and interests from photography, walking, study travel, nature & culture.
Volcano watching guide