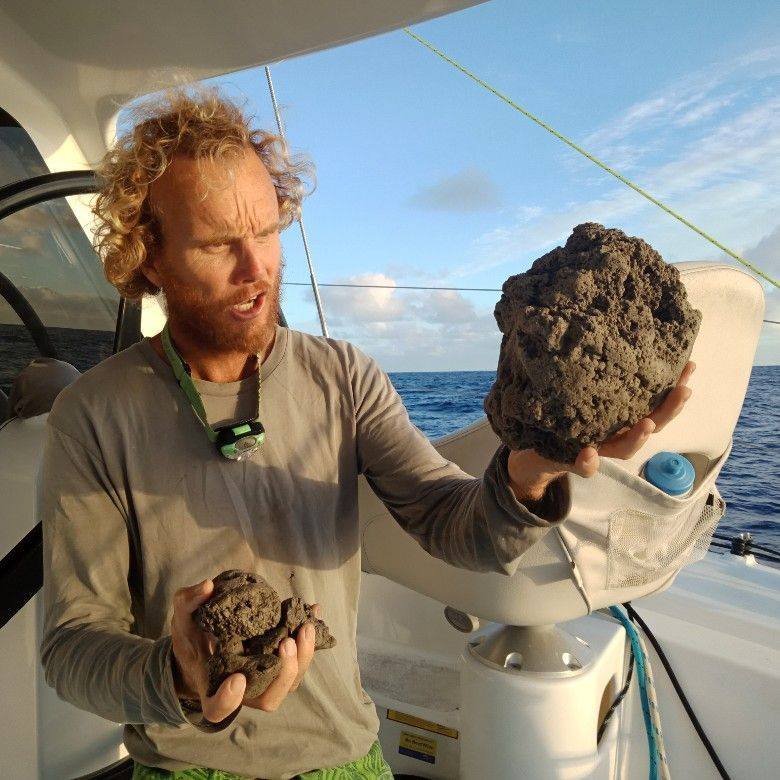 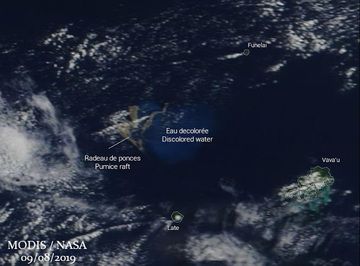 Satellite image of the pumice raft on 15 Aug (image: MODIS/NASA, annotated by Culture Volcan)
A new eruption, likely submarine, has occurred (or is still in progress) during the past days west of Vava'u Island in the Tonga archipelago. Its origin volcano is still a bit unclear, but the eruption, evidenced by fresh pumice rafts and steam plumes is most likely from a submarine volcano near or a vent of the small Fonualei volcano.
On 7 Aug, an observer sent us the following report:
"At around 10:40am on Wednesday 7 August, we noticed large clouds of smoke on the horizon at the location of Fonualei volcano. The plume continued to get larger over the next few hours. It seemed to pause and then erupt again."

The notice published on our website went largely unnoticed, but makes more sense now that a catamaran cruising in these waters came across a large raft of fresh pumice (very vesicular, frothy lava so light it can float), which was produced by the eruption.

The following is an excerpt from the detailed report they published on facebook:
"Catamaran ROAM sailing to Fiji encountered volcanic rocks (Pumice) completely covering the ocean surface at location: 18 55'S 175 21'W Time 0800hrs UTC (1900hrs local) 15/8/19. Rubble slick made up of rocks from marble to basketball size such that water was not visible. ...
Sailing on 255T we started seeing some floating rocks of random sizes (marbles to tennis balls) from position 18 46'S 174 55'W. ... At position 18 50'S 175 05'W we had faint but distinct smell of sulfur. ... At position 18 54'S 175 19'W we started to see and strike larger floating rocks. We took down all sail. Allowing the boat to continue on bare poles at 2-3kts on COG 255T. As we could no longer smell the sulfur we assumed we would be soon clear of the rubble so elected to continue at slowest speed.
At approx 0700hrs UTC (1900 local) 15/8/19 at position 18 55'S 175 21'W we entered a total rock rubble slick made up of pumice stones from marble to basketball size. The waves were knocked back to almost calm and the boat was slowed to 1kt. The rubble slick went as far as we could see in the moonlight and with our spotlight. We made a turn to starboard and managed to sail clear of the rubble slick under Staysail. We had entered it approx 200m and the edge could be made out in the partial moonlight back to the
NE. It was extensive in all other directions."

Recent satellite imagery from the area showed discolored sea water (by dissolved volcanic gasses in water) and steam (likely the same as reported above), suggesting that the eruption started around 6 or 7 Aug. At the same time, the pumice raft can be detected on satellite imagery, in several batches covering an area of about 400 km².
From the location of the pumice rafts, the eruption point is most likely an yet unnamed and unlisted submarine vent or volcano north of the volcanic island of Late, and south of the volcanic island Funualei.

Does the eruption still go on?
The most recent satellite images show no longer signs of new discolored water and pumice rafts, which could either mean that activity, if still going on, has decreased to fall below visual detection level, or has ended.
---
Links / Sources:

The Laboratoire de Géophysique reported that explosive volcanic activity may have occurred at Fonualei volcano during late September. On 27, 28, and 30 September numerous short T waves were received by the French Polynesian Seismic Network. The preliminary location of the seismicity was determined to be near the Tonga archipelago at 18.18°S (well constrained) and 174°W (not as well constrained). ... Read all
First visit to our site? If you havn't done it yet, download the Volcanoes & Earthquakes app to get one of the fastest volcano news online:
Android | IOS
Fonualei volcano
Stratovolcano 180 m / 591 ft
Tonga, Tonga Islands, -18.02°S / -174.33°W
Current status: normal or dormant (1 out of 5)
News/Updates | Earthquakes | Books
Fonualei volcano eruptions:
1957
Typical eruption style
unspecified
Latest nearby quakes
Latest satellite images
Try our free app!

Earthquake monitor
Lists and maps of earthquakes in the world in near real time. Country lists, earthquake archive, and I-felt-it reports.
Volcanoes in Africa

List and map of all volcanoes in Africa. Most volcanoes are located in the Great Rift Valley, but there are more.
Bárdarbunga

Largest 20 earthquakes past 24 hrs
Our continuously updated worldwide map and list of the most recent largest earthquakes in the world during the past 24 hours.
You can also find top 20 lists for given past days / months / years from the archive.
Volcanoes and Spices

17 days volcano trekking
This is one of our most exciting volcano tours! Halmahera, North Sulawesi and the Sangihe Islands are not only very scenic and interesting as well as nearly unspoiled by tourism, but also home to some of the country's most active (and often erupting) volcanoes, inclduing Dukono, Ibu, Lokon, Soputan and Karangetang.
Get the ad-free version!
Why is there advertising on this site?