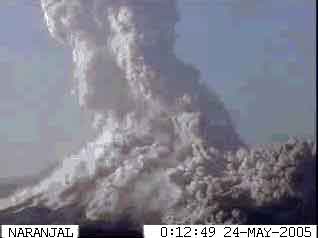 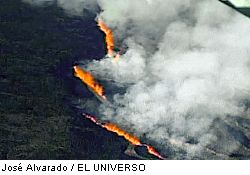 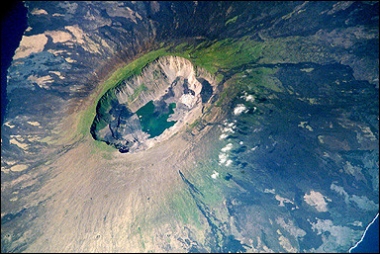 NASA image of La Cumbre volcano, Fernandia Island, taken from the International Space Station in 2002.
La Cumbre volcano on Fernandia Island, in the Galapagos Islands, erupted on May 13, with a steam and ash cloud up to 7 km high. Lava flows are travelling down the volcanoe's SW flank and some of them have reached the sea. Read all
en haut
Lascar eruption (Chile)
jeu., 12 mai 2005, 18:09

Between 28 April and 4 May 2005, almost continuous emissions of thick white to gray ash-clouds were observed rising about 700-800 m above the summit crater.
Glow was visible during nights; strombolian activity with projections of incandescent lava became frequent in early May.

Since the eruption on 19 Aril, 2005, the lava dome continues to grow, producing frequent small block and ash flows (avalanches of hot lava from the unstable parts of the dome). 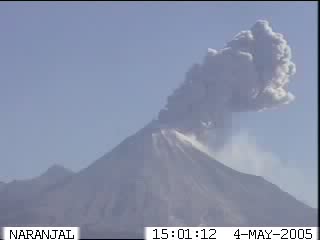 Live cam image of Colima showing an ash eruption on 6 May, 2005.

Colima remains in a highly active state with a growing lava dome. Typically, a few relatively strong explosions are occurring per day that at the moment do not threaten the volcano's surroundings. Stronger eruptions able to produce pyroclastic flows could occur at any time.

Activity at Popocatépetl volcano is a low levels, although a low alert level and an exclusion zone around the volcano is being maintained for safety reasons, since an intensification of the eruption at any time cannot be excluded. During the past days, CENAPRED (the monitoring system of Popocatépetl volcano) registered a number of weak steam and gas emissions. In an aerial photograph taken on January 14th, subsidence is observed in the inner crater and no lava dome at the bottom of the crater could be observed.

Sheveluch volcano remains in strombolian activity, with explosions that produce ash plumes some 1-2 km above the crater. At the moment, scientist have no data on the seismic activity in the area of the volcano, because the station at Baidarnaya, eight kilometers from the peak of Shiveluch, was destroyed by a lahar on February 27-28. 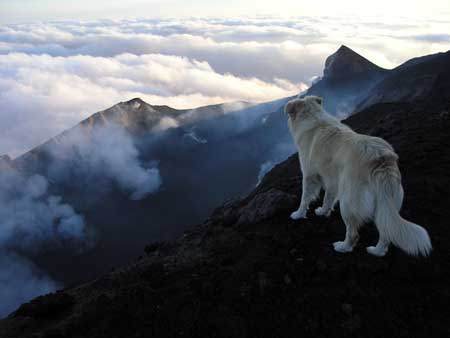 The crater terrace of Stromboli volcano seen from its W rim.

During repeated excursions of the VolcanoDiscovery Europe team to Stromboli volcano in late April 2005, the volcano showed "normal" strombolian activity at medium levels:
The oval-shaped, active crater terrace consists now of 3 clusters of vents, which corrispond to the former NW (towards Ginostra), Central and NE craters (towards the village of Stromboli). During our visits, no activity other than weak steaming was observed from 3 small pits inside the NW crater. The central crater complex has two open glowing pits that were observed spattering weakly, throwing bombs to up to 10-20 m height. A third vent at the northen end of the central crater is a circular cone about 15m tall, with a small round opening, about 1-2 m large, that was glowing and exploded from time to time, about every minutes, throwing a candle-like jet of lava to about 150 m, accompanied by a loud detonation noise that caused impressive echoes in the summit area (these echoes sometimes went back and forth between the Vanori and the Pizzo headwalls up to 5 times).
The NE crater complex, heavily changed by the collapse of 30 Dec. 2002 and subsequent events, consists of at least 2 vents, of which one (to the W) is another small cone that we observed explode irregularly, at intervals of several hours, and throwing jets of lava to 100-150m, while the more active vent(s?) to the E end of the crater, not visible from Pizzo and the crater rims), showed beautiful strombolian activity every 10-30 minutes, with almost noiseless, wide sprays of lava to 50-100 m that covered the outer flank of the NE crater with bombs. During our observation times, no explosion was strong enough to throw glowing material to the steep flank of the Sciara del Fuoco.

Colors of Iceland
Discover Iceland's fascinating geology and volcanic activity on this relaxed photo and geo tour! Get to see the new volcanic eruption on the Reykjanes peninsula from close!
Largest volcano

Do you know which is the biggest volcano in the world?
Volcano Calendar 2019

Volcano Calendar 2019
We're proud to present our 2019 volcano calendar: 13 different and attractive images of volcanoes, volcanic landscapes and phenomena taken during volcano tours over the past few years.
Dallol

Photos of Dallol
Look at one of the most surreal landscapes on Earth, created by hot springs, colorful salt deposits and volcanic gas vents.
Why is there advertising on this site?
Support us - Help us upgrade our services!
We truly love working to bring you the latest volcano and earthquake data from around the world. Maintaining our website and our free apps does require, however, considerable time and resources.
We need financing to increase hard- and software capacity as well as support our editor team. We're aiming to achieve uninterrupted service wherever an earthquake or volcano eruption unfolds, and your donations can make it happen! Every donation will be highly appreciated. If you find the information useful and would like to support our team in integrating further features, write great content, and in upgrading our soft- and hardware, please make a donation (PayPal or Online credit card payment).