The strombolian activity from NE crater is no longer visible, as the magma column has dropped again inside the conduit. (-->So, the worrying question is, where is all that magma going ... into some new flank intrusion?)

Popocatepetl had a strong explosion on 25 July at 09h50 local time, producing an ash and gas plume of  5 km height above the crater. The eruption lasted 1 and a half minute and was accompanied by high-frequency tremor. It is believed that the explosion was caused by interaction of water from the recent heavy rains with the hot lava dome inside the crater.

Piton de la Fournaise's eruption continues and from today on, visitors are allowed to enter the Enclos until the Bory crater, ca. 1.2 km from the eruption site, from where there is a good observation point.
On 22 July, the intensity of the eruption had decreased and since then, the lava flow has only been weakly alimented. A new cone is being formed at the eruption site located between the cones Rivals and Château Fort on the flank of the main crater.

According to the Buenos Aires VAAC, a pilot reported that ash plumes from Ubinas during 22-24 July reached altitudes of 7 km (23,000 ft) a.s.l. and drifted SE. Ash plumes were visible on satellite imagery.

During 19-25 July, lava flow / rock-fall activity at Merapi continued with incanescent rockfalls reaching maximum distances of 1.5 km SE toward the Gendol River. Pyroclastic flows were not observed during the reporting period. The Alert Level remained at 3 (on a scale of 1-4).

Based on interpretations of seismic data, an explosion at Canlaon that lasted more than 10 minutes occurred on 23 July. An ash column was not observed due to cloud cover. Trace deposits of ash fell up to 9 km ENE of the crater in the neighborhoods of Pula, Malaiba, and Lumapao. On 24 July, PHIVOLCS reported a total of 16 volcanic earthquakes, 3 short-duration tremors, and 2 earthquakes indicating small explosions. Ash was not observed.

During 19-25 July, smaller to medium-sized explosions continued at Tungurahua volcano. Small pyroclastic flows descended NW a maximum distance of 1 km on 21 and 23 July. Steam-and-ash plumes were observed during 19-22 and 24 July and reached maximum heights of 5 km above the summit (32,900 ft a.s.l.) on 21 July. According to the Washington VAAC, pilots reported on 19, 22, and 23 July that ash plumes reached altitudes of 10.7 km (35,000 ft) a.s.l. and drifted predominantly W. A hot spot was visible on satellite imagery from 19 to 22 July.

Lava flows from Mayon traveled SSE a maximum distance of 4 km from the summit toward the Bonga gully and branched off to the W and E. Incandescent blocks shed from the toe and margins of the flows were visible at night and traveled SE. Ash plumes generated from the rolling blocks produced light ash fall 8.5 km E of the summit in Sta. Misericordia. On 20 July, pyroclastic flows were observed on the SE slopes prompting ~100 families to evacuate. On 22 July, lava flows advanced NE towards the Mabinit channel. The lava flows were within the 6 km radius Permanent Danger Zone.

Dome growth appears to have continued, and visual observations on Thursday 27 July revealed that the blocky spine - first observed on 21 July - remains intact, although leaning to the east, It is also is also now one of a number of spines along the crest of the dome (crest orientation approximately south to north).

The effusive eruption from the fissure at the base of the SE crater ended on 24 July. Shortly after, mild explosive strombolian activity started at the NE crater as observed since 26 July.
The recent lava flow field emplaced on the west wall of the Valle del Bove had reached the base of Monte Centenari at 1800 m a.s.l.

Dome growth (and rockfall activity) appears to have been focused to the NE and visual observations on the morning of Friday 21 July showed that the dome has grown markedly during the reporting period. It now has an asymmetric profile, with a blocky spine on the northeast end. The height of the spine was estimated at 895 m on Tuesday 18 July.

Planet's Earth closest sister, Venus, is not only similar in size and composition, but also has volcanic activity. In fact, volcanic deposits cover approx. 80 % of its surface! Read all
jeu., 1 janv. 1970, 00:00
Science Spotlight: Geothermal Colors 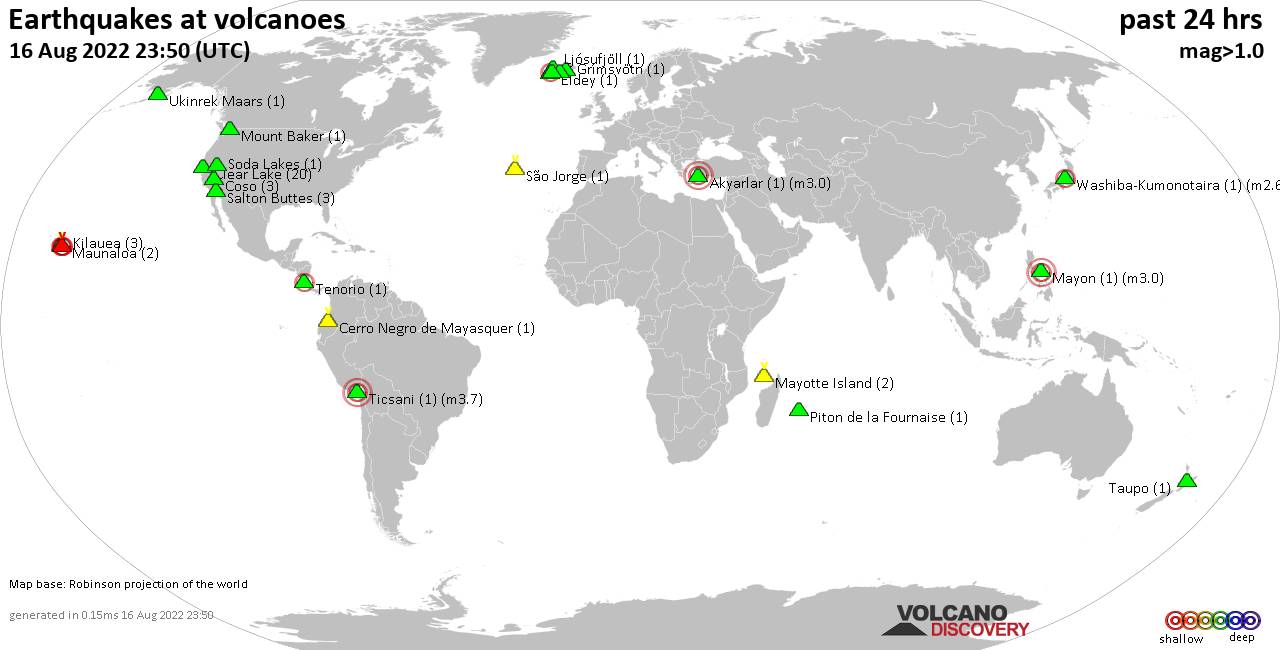 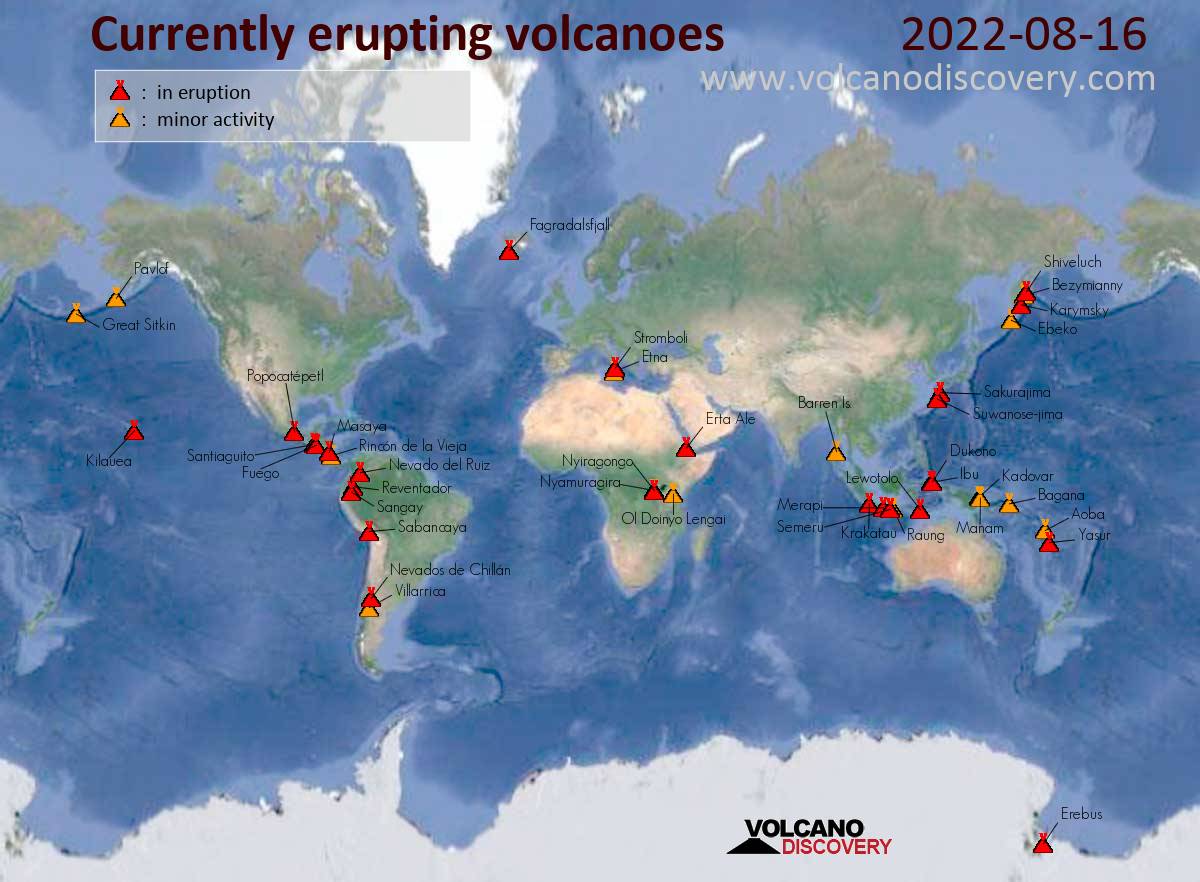 Etna trekking tour
A tour entirely dedicated to Etna, the most active volcano in Europe. Spend 6 full days on Etna and get good chances to see eruptive activity.
VAAC

Solar Eclipse & volcano tour
A total solar eclipse will occur on 14 Dec 2020 and pass over southern Chile and Argentina. Chile's most active volcano Villarrica is located exactly on the center line where the eclipse will be best to observe.
We offer you the unique chance to combine the eclipse with a tour to one the world's most beautiful volcanic areas - the Lake District in Chile.
Erta Ale eruption
Overflowing lava lake 17 Jan 2017
Kuril Islands